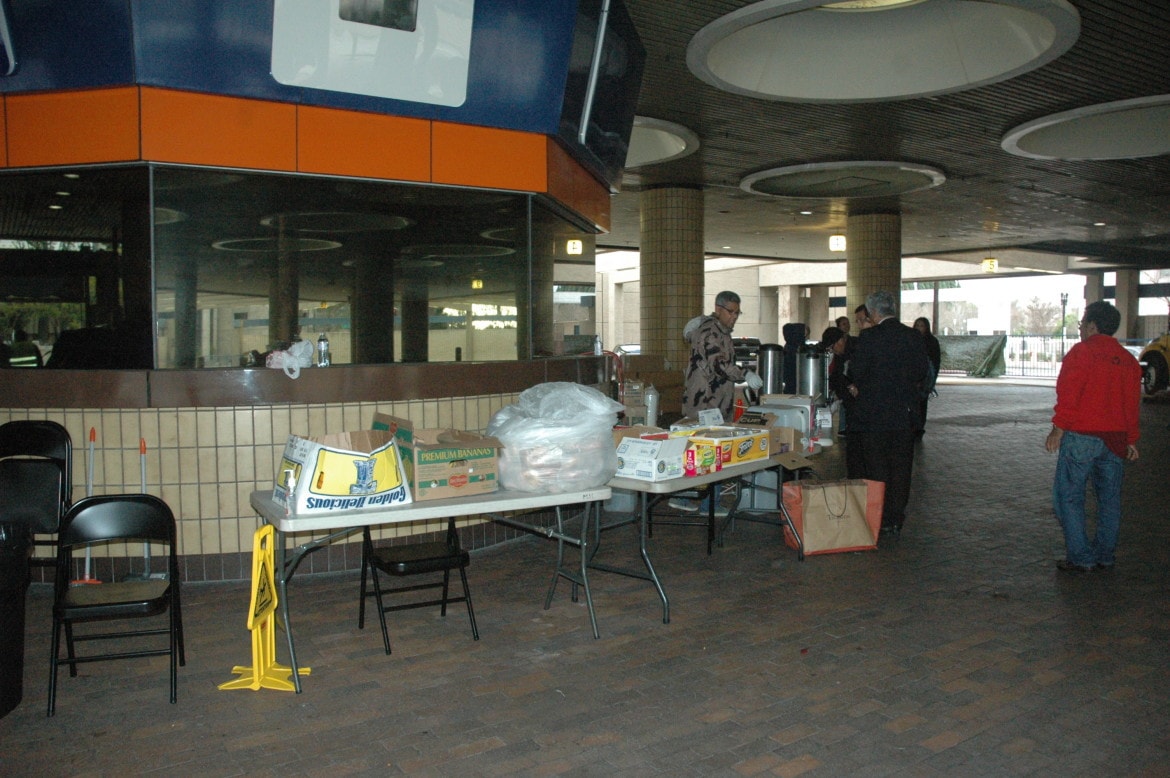 The scene Sunday at the bus terminal in Santa Ana, which was opened over the weekend to provide shelter for homeless people.

Now that Orange County’s media-blitzed jail escapees are behind bars, county supervisors should start asking some hard questions, in public, about how Sheriff Sandra Hutchens’ jail is being run.

Although I doubt it will happen.

We don’t do hard questions in the OC.

I’m starting to wonder whether any top county government official in Orange County will ever be publicly held accountable for anything – whether it’s a crisis at the DA, feckless county responses to issues like homelessness or animal shelters, or now, even basic jail security.

Last month we watched our top local law enforcement official — District Attorney Tony Rackauckas — call for a federal probe of his own shop because people are apparently afraid of telling him the truth.

Is Hutchens in the same boat?

She came to Orange County in 2008, a former top lieutenant to former LA Sheriff Lee Baca, as an outsider following the indictment of former Sheriff Mike Carona. She was billed as someone who could change a lax jail culture exposed by the 2006 jailhouse beating of John Derek Chamberlain.

Carona ironically is rounding third base on his jail sentence just about now. Baca blew up politically in LA and has since retired amidst a mass of fraud, waste and abuse allegations.

In the meantime, Hutchens padded up a good-sized command staff around the idea of beefing up accountability and supposedly instituted a culture of following the rules.

County supervisors touted themselves for instituting the Office of Independent Review at the Sheriff’s Department – now in the works to be expanded across several agencies including the DA – to supposedly look at the jails and coordinate with an ongoing U.S. Department of Justice review.

I’m already hearing rumblings that Hutchens’ command staff may not have been following department policies on prisoner headcounts – even though they were warned on the record.

I have yet to hear a word from OIR on that issue.

But County Supervisor Shawn Nelson, who has consistently voted against funding OIR, said the briefings are a zero on the jail escape so far.

“OIR will never ask a hard question or expose anything that puts the sheriff in an awkward position. So what’s the point?” Nelson said.

“They have given some updates,” Nelson said. “It’s a reciting of KFI (radio) and the (OC) Register.”

The Association of Orange County Deputy Sheriffs (AOCDS) recently disclosed a letter sent to Hutchens from its President Tom Dominguez putting her on notice that deputies were told to ignore policies on head counts by Hutchens’ command staff.

Dominguez’s letter points to official email traffic documenting the back and forth on headcounts (which I’ve asked to review).

The deputies’ union has called on jail commander Capt. Chris Wilson to resign his command.

Wilson was the lowest-rated manager by the rank and file in the Sheriff’s Department based on a recent survey of deputies.

At this point, it’s unclear whether Wilson has been relieved.

According to sources, Wilson was last seen on shift Friday but wasn’t reportedly scheduled to work over the weekend. Some deputies are being told he’s off on a few days vacation while others are hearing he’s on administrative leave. Others have been told that Lt. Rob Gardner is in charge of the jails now.

“I have been very clear from the onset of the jail escape investigation that I am deeply concerned about the length of time it took to recognize that three maximum security inmates were unaccounted for,” Hutchens wrote.

“I have initiated an internal administrative investigation to determine the facts of what occurred, contributing factors to the escape and inmate count procedures. Until the investigation is complete, I am unable to discuss further. Please know that we have taken immediate action to ensure that this situation will not happen again, and that the safety of our community is my highest priority. There have been no personnel changes as of this time.”

Yet more and more that’s morphing into don’t even go back to judge.

Expect what you inspect.

That’s what I was thinking this weekend when it started to rain and I took my seven year-old son, Maximo, to witness the county’s homeless response to cold weather at the newly opened Santa Ana Transit Terminal at downtown Santa Ana’s civic center.

It took him ten seconds to pierce a hole in the county plan with a good question – given that county supervisors authorized $500,000 for cold weather sheltering this year.

“Where are the heating lamps?” asked the boy immediately as he entered the frigid $3.2 million bus terminal taxpayers just bought last month to help shelter and address the civic center homeless population. “Where are the beds?” 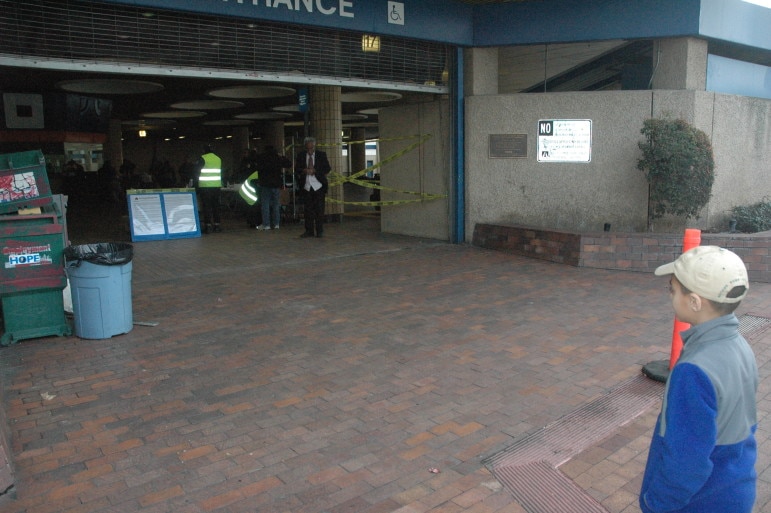 For most of the week, I kept asking executives what were the plans to convince the hundreds of homeless at the civic center that there’s hope at the bus terminal.

Our elected officials always have such an enduring faith in government executives.

Yet with all due respect to all these officials, the scene at the bus terminal this weekend wasn’t very welcoming and the area looked totally slapped together.

A few tables with snacks, some thin sleeping mats and a security-wand welcome that was accepted by just a few of the hundreds who were just strewn across the terminal sleeping in a makeshift arrangement. 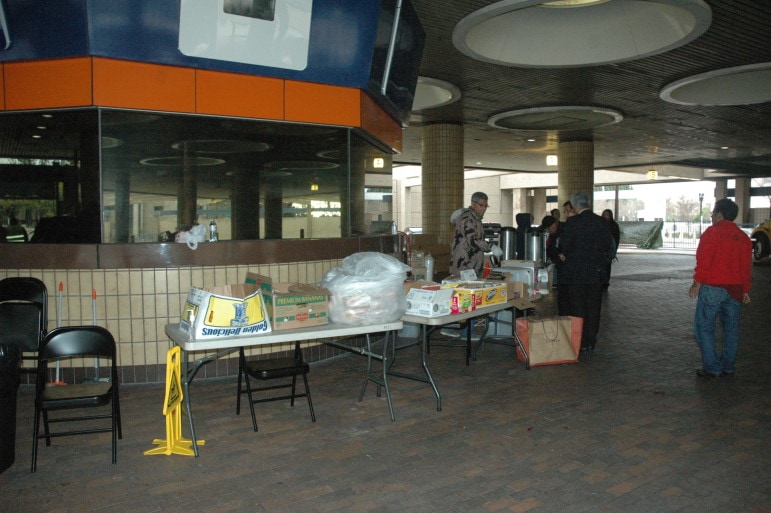 One worker told me 198 people had come through but even he admitted few were staying.

From what I was told, the wand welcome is the standard approach used at the armories operated by Mercy House but nowhere near what it will take at the civic center to change things, much less convince people to abandon the lawless tent city that has sprung up. 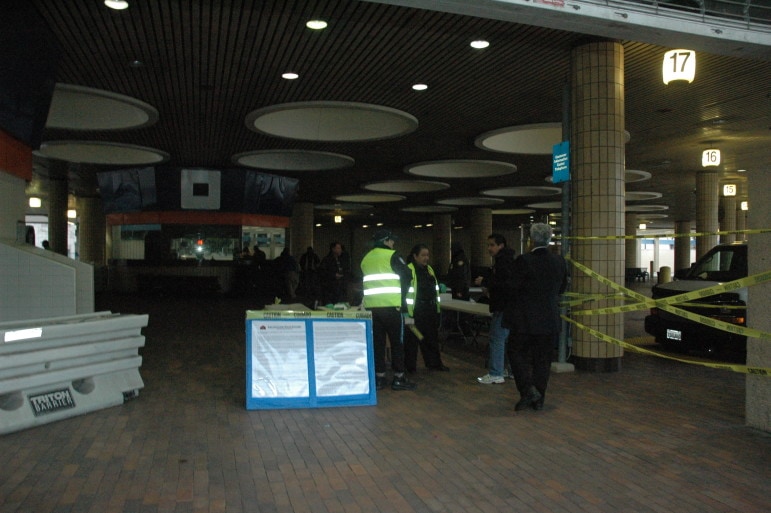 Despite the nice press release by county supervisors – choc full of heartfelt remarks – I wonder, did any venture out there this weekend?

Did any of our six-figure county executives make their way out there to see how the most vulnerable made it through the rain?

The entrance to the bus terminal sure didn’t feel like any did.

Hundreds stayed in makeshift tents throughout the civic center in the weekend rain.

And that’s a total failure.

It took my seven year-old ten seconds to realize that.

How long will it take Orange County’s $6 billion county government to do the same?