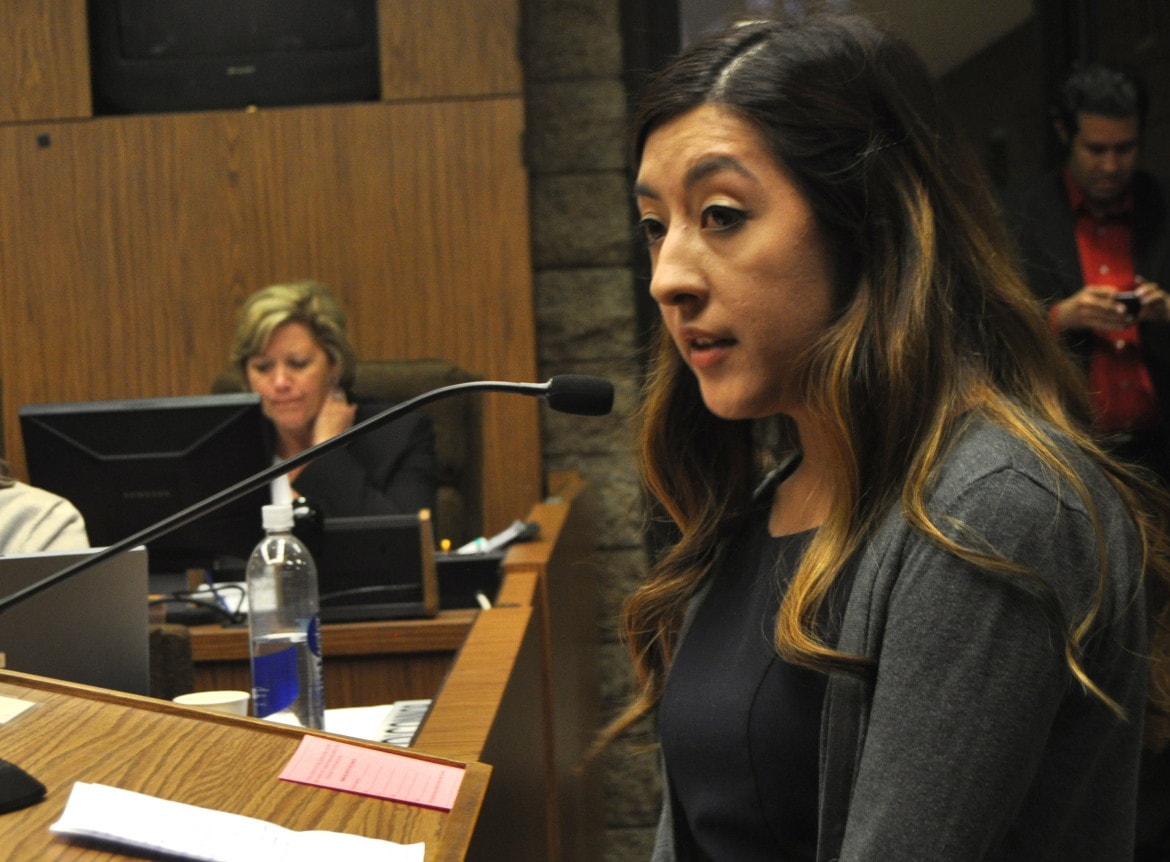 Garden Grove City Council candidate Kim Nguyen addresses the council during a meeting earlier this year. Standing in the background (in a red shirt) is Claudio Gallegos, who has played a controversial role in the drawing of the city's new district map.

Just about a month before Garden Grove City Council members are set to vote on the final boundaries for a new electoral district system, residents Tuesday received their first look at a three maps under consideration.

The city is facing a May deadline to transition from at-large elections to electing council members by-district, after a California Voting Rights Act lawsuit by a Latino resident forced a settlement last September.

After weeks of public meetings and community outreach, David Ely, a demographer with Compass Demographics, presented council members with three potential maps, one created by himself and two from members of the public.

The new system will divide the city into six council districts with a seventh seat on the council for a mayor who will be elected at-large.

Proponents of district elections say the new geographically-based system will better represent Latinos, who make up 37 percent of the city’s total population and constitute a majority on the city’s east side. A Latino resident has never been elected to the council.

Although there are differences how the boundaries are drawn, all three maps share similarities in how they divide the city’s east and west sides. West Garden Grove, which is 45 percent non-Hispanic white, encompasses all of district one.

East Garden Grove, which borders the city of Santa Ana, is divided into two districts that are between 45 and 62 percent Latino.

The major differences are in how the city’s center is divided. 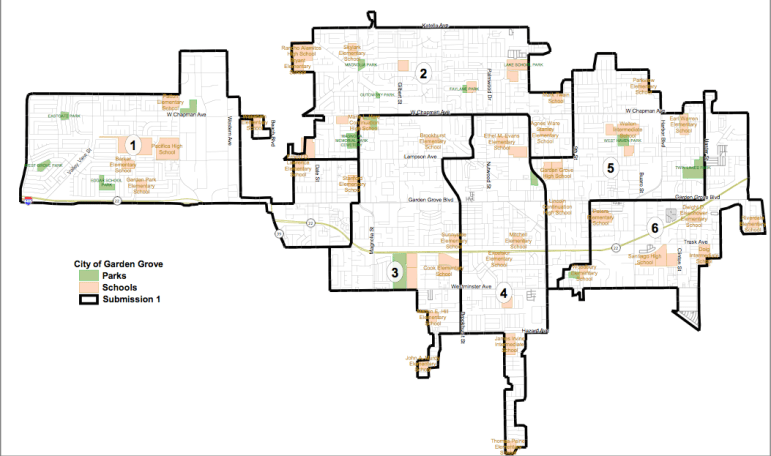 Kim Nguyen’s map has been backed by some Vietnamese community leaders and the county’s League of United Latin American Citizens, who called their endorsement a “historic partnership” of the two communities in a press release.

At the council meeting Tuesday evening, the 25-year-old Kim Nguyen pointed to her background as a half-Vietnamese, half-Latina who grew up in east Garden Grove.

Those backing Nguyen’s map say it will adequately represent the two minority communities, which each make up about 37 percent of the total population, by creating two Asian-majority and two Latino-majority districts.

Meanwhile, other residents have criticized Nguyen’s map for cutting through the central part of the city vertically, which they say is an unnatural boundary that crosses through neighborhoods.

The second public submission by resident Andrew Kanzler, a Planning Commissioner who lives just east of Euclid Street, divides the center of the city into two northern districts above Garden Grove Boulevard and one southern district encompassing most of Little Saigon. 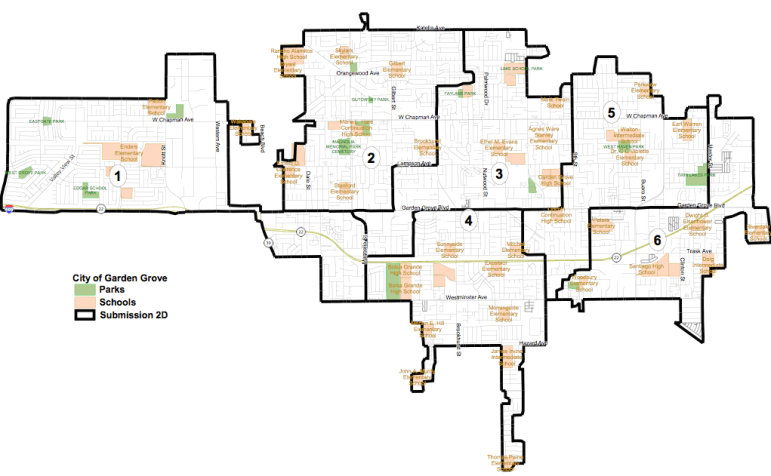 The southern district is majority Asian, at 61 percent, while the two northern districts are split among Latino, Asian and white residents, although Asians have a slight plurality in both districts around 40 percent.

Kanzler says the two northern districts in his map reflect a more “true democracy” by keeping the districts competitive. A number of residents who collaborated on the map as part of a new community group called Civic Garden Grove spoke in support of Kanzler’s map.

“The remaining zones, 2, 3 and 5, which is half of the zones, are a mix. There’s not one that is primarily one ethnicity over another,” said Josh McIntosh. “To me, that’s the beauty of Garden Grove – the mix. It’s not the solid ethnic enclave, it’s not east, west, Little Saigon, it’s the whole picture.”

Some Vietnamese community leaders, especially those supporting Kim Nguyen’s map, have said that consolidating Little Saigon into one district would weaken the vote of Vietnamese American residents.

Finally, after several drafts maps, Ely submitted one that he felt represented a compromise of the two maps and “a way of carving up the city” not reflected in the public submissions. 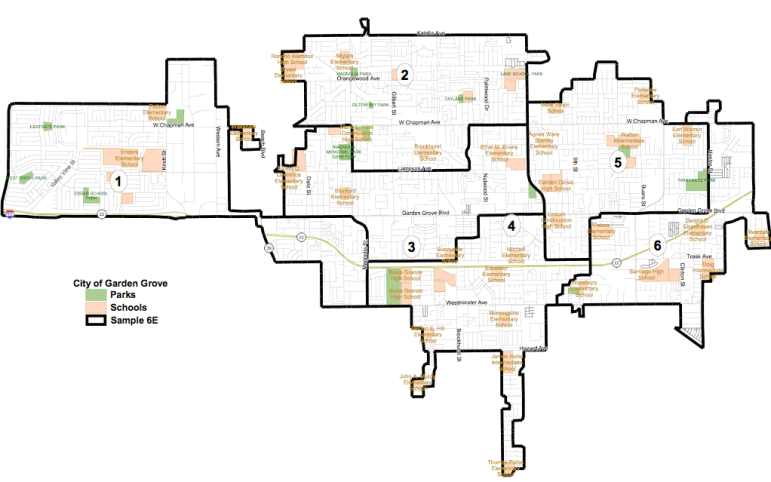 Ely’s map splits central Garden Grove into three districts stacked horizontally, with one district to the north of Lampson Ave split relatively evenly between racial and ethnic groups, and two districts to the south of Lampson with Asian majorities.

It also places Garden Grove Boulevard at the center of district 3, which is meant to capture most of the city’s Korean Business District into one electoral district.

Although Garden Grove has a large Korean American business community, that has not been a priority in other maps, as most of the county’s Korean residents have settled in other cities such as Fullerton and Buena Park. Ely has also been hired to draw the maps for the city of Fullerton, which settled a Voting Rights Act lawsuit brought by a Korean resident last year.

Ely said his map also splits the Neighborhood Association’s area of interest between two electoral districts. He has not recommended any individual map to the City Council.

“It’s my opinion that all of these maps would be perfectly acceptable or legal,” he told council members. “There’s different issues that could be raised about all of them, but I don’t think there’s anything that would be raised to the level of litigation.”

The districting process has been a source of consternation for some residents, both among those who are against the shift to district elections, and those who say focusing on ethnicity is divisive and counterproductive.

“We’ve spent all this money on districts, now can we just be Garden Grove?” said one resident at a community workshop on March 12.

Garden Grove residents last made a push for district elections back in 2006, although that was not motivated by race or ethnicity but a belief that the division of resources, such as public parks, has not been equal citywide.

The process has sparked conversations about how long ethnicity will be such a dominating factor in city elections.

“I do not think it’s so much think it’s voting for a candidate that’s your like ethnicity, but voting for someone who lives in your community,” said resident Peggy Bergin. “We’ve got to stop saying, Vietnamese, Spanish, Caucasian…and what we want to do is get our areas recognized.”

But ethnicity continues to be relevant to many Latino and Asian communities, especially where language is involved. In the lead-up to Tuesday’s council meeting, a number of community leaders have criticized the city for a lack of outreach to Spanish- and Vietnamese-speaking communities during the districting process.

Even with the implementation of council districts, increasing citizenship and voter registration will be key for Latino residents. Although Latinos make up 37 percent of the total population, they are only 32 percent of the voting age population and only 24 percent of citizens who can vote.

The City Council will hold two more public hearings during their April 12 and April 26 meetings. At the April 26 meeting, council members will vote on an ordinance to establish the official district boundaries.

A second vote on the ordinance, at which time the council will decide the order that districts will be up for election, is scheduled for May 10.