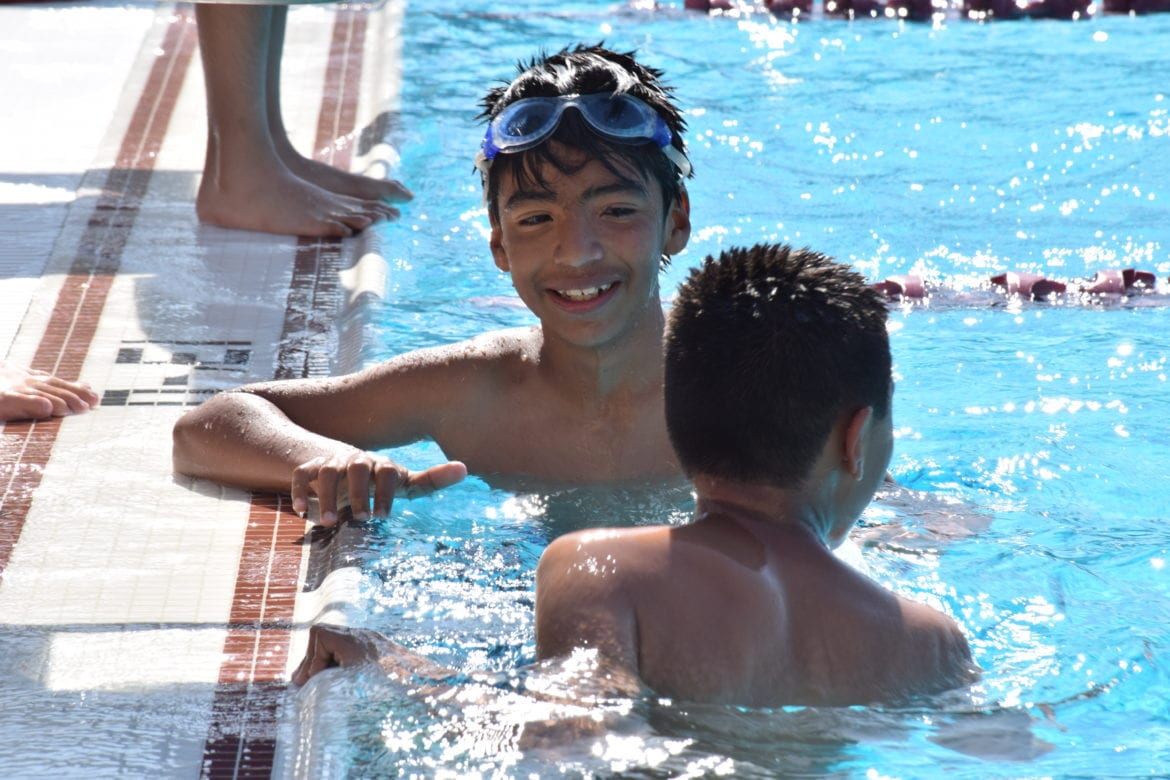 Participants in the Reach Beyond the Beach program in Huntington Beach's Oak View neighborhood.

A pack of 11-year-olds scurry toward the shallow end of the Ocean View High School pool and jump into the cool blue water. Laughing and giggling, the kids splash around for a few seconds, fully uninhibited, before their coaches draw them in for warm ups.

They are part of the new Reach Beyond the Beach program, which is aimed at helping kids from the low-income Oak View neighborhood become Huntington Beach junior lifeguards.

Junior lifeguard programs, which are offered throughout Southern California, provide intensive ocean safety training — including ocean rescues, CPR, and understanding the currents — to children from age nine to 16. But the swimming requirements and problems with transportation, among other things, are often barriers to kids from low-income families. 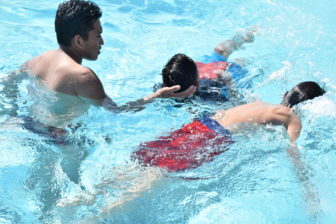 Reach Beyond the Beach, led by the El Viento Foundation, which offers Oak View youth enrichment opportunities, was formed to break down the barriers.

“A lot of students don’t have access to a pool and yet of course we live here by the beach so being a good swimmer is really, I think, an important thing,” said Colleen Mensel, current CEO and President of El Viento.

Behind a black metal fence, Rocio Cortazar peers in. A smile hasn’t worn off her face since David Monge, her son, entered the pool. Her eyes dart from side to side, following him as he takes some laps from one end to the other. Nowadays, working as a cook at a local Italian restaurant, Cortazar lives for these moments, looking out for signs of hope and a better life for her son.

“He’s just so happy with the program…I just want him to try to learn more stuff…something that [my husband and I] didn’t have,” Cortazar says. “His future, maybe, will be… more interesting.”

“[These activities] keep him busy and give him something else to do other than laying around and being stuck at home and watching television,” Pilar Flores said of her son, Gerardo Flores. “He loves swimming very much and I hope he keeps going on with the program.”

Oak View is a predominantly Latino neighborhood situated in the northeast corner of Huntington Beach. It was once deemed the “Most Dangerous Neighborhood in the Safest City in America,” by the OC Weekly, though more recently crime has waned.

A third of Oak View residents live below the poverty line— four times that of other areas in Orange County, according to the Oak View Renewal Partnership, a community-development organization.

When asked about her financial conditions and life in Oak View, Cortazar had few words. “Things are not really good,” she says, “but we work on it.”

Meeting once a month for five months, 25 fifth graders of El Viento Foundation have been preparing for a standard swim test required of all youth who are interested in becoming junior lifeguards. 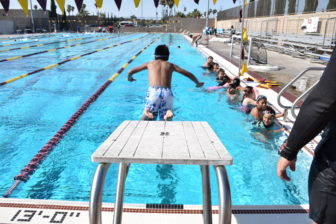 If they pass, they will be eligible for a scholarship, funded by Friends of the Junior Lifeguards, to commit to the Huntington Beach Junior Lifeguard program this summer. The scholarship will cover registration and transportation expenses as well as the necessary clothing and gear for Oak View participants. The OC Riptide Aquatics Club is providing coaches for the swim lessons.

Shortly after taking a dip in the pool on a recent Monday, the potential junior lifeguards are settled into a nearby classroom and peering up at a white board, where teacher Samantha Dieterman has scrawled the words “RIP CURRENT” in bright red.

“Okay guys, what can you guys tell me about rip currents? What are some of their characteristics?”

Initial looks of bewilderment fill the room, but then hands shoot up.

The classroom explodes with laughter. Dieterman cracks a smile and, once the students gather themselves, she proceeds with her lesson.

“Okay now here’s the important thing about rip currents and how you escape from them,” Dieterman says. “You guys have to swim parallel to the shore and also remember, don’t panic! You do those two things and you’ll get out.”

For the last activity of the day, the children receive a crash course in using rescue rafts with half of the class playing the roles of “the victims” and the other half taking on the responsibilities of being “the lifeguards.”

Their teacher lays down the ground rules.

“Have any of you seen beauty pageants? Ms. America?” Dieterman asks. “As the lifeguards, you wear this strap like this… like a sash. Remember, it has to go across the body! See, now it’s not gonna go anywhere! It’s locked in!”

“Great question! The raft should be able to keep them afloat as long as they hold tightly onto it.”

With a few giggles, the children are let loose, tugging one another around on the bright yellow rescue rafts. Parents who have arrived early to pick up their children peer through the windows, quietly watching.

Marvin Luu is a literary journalism major at UC Irvine and the sports editor of the student newspaper, The New University.