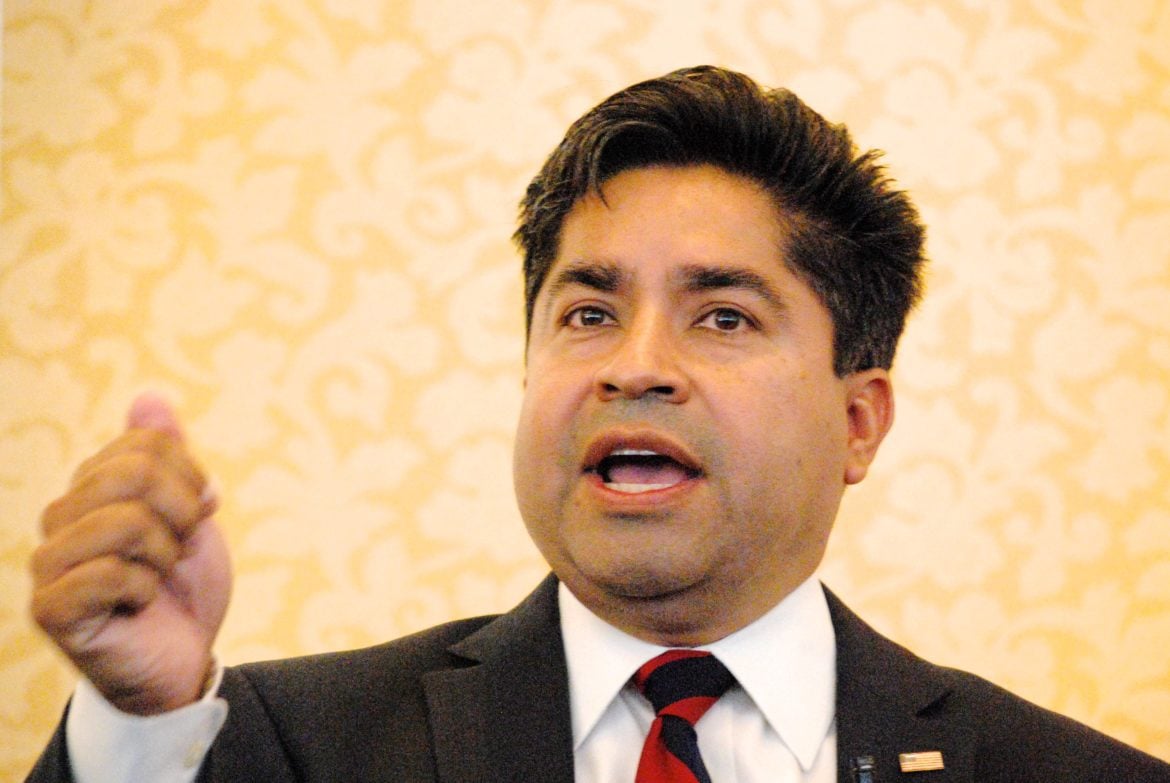 Jose Solorio, a former Santa Ana councilman and state assemblyman who now works as a lobbyist, is seeking a return to the Santa Ana City Council in the November election.

“Over the past several months, as I’ve been looking at recent high-crime trends and issues and opportunities with our school district, I really feel like I can best use my experience and connections” for the entire city, he told Voice of OC in an interview Wednesday.

Solorio’s announcement makes him the first known candidate to jump into the Ward 3 council race, which is expected to be competitive amid a widespread belief that the current councilwoman, Angelica Amezcua, will not run for re-election.

His entry has fueled curiosity and questions about how he will be eligible to run for the North Santa Ana district, given that he has lived for years in a different ward nearly four miles away on the south side of the city.

Legally speaking, Solorio would be in the clear as long as he moves to Ward 3, which covers the city north of 17th Street, by mid-July. The city’s municipal code requires that candidates live within the ward they want to represent at least 30 days before nomination papers are issued. The completed nomination paperwork is due by mid-August.

Solorio, who for years has lived with his wife and two sons at their home near the city’s South Coast neighborhood, said he has found a new place for himself to live in Ward 3.

“Just yesterday I got a lease in a beautiful apartment off of North Grand [Avenue], and I’ll always be a couple of miles away from the rest of my family, unlike when I was in Sacramento,” Solorio said Wednesday.

Solorio added that his first couple years in Santa Ana were spent living in Ward 3, “so I feel like I’m going back home.”

He enters the contest with a campaign war chest that’s likely to dwarf any other potential candidate, with nearly $200,000 in the bank at the start of the new year.

It’s unclear how much of that money, which as of January was in his Rancho Santiago Community College District campaign account, he’ll be able to transfer to his Santa Ana campaign.

The city’s $1,000 campaign contribution limit is much stricter than those of candidates running for the state legislature or the community college district. Solorio said most of the $200,000 can be transferred for his City Council run.

If he’s elected, Solorio said he plans to focus on reducing crime and improving the city’s public education system.

“We need a holistic approach [to addressing crime] that includes prevention, intervention, and suppression activities,” he said. “And also it’s past practice in this town where on paper we’re saying we’re hiring X number of cops but we never do. So we really need to fulfill the commitments we make in the city budget.”

When it comes to public schools, Solorio said he wants to pursue opportunities for joint-use agreements to open up schoolyards after school as parks, teaming up on after-school programs, and partnering with schools on developing internships and summer jobs for youth.

“I’m now a very experienced elected official that knows how to bring people together and how to identify and implement goals,” he said.

As for Solorio’s choice to run for Ward 3, it might seem odd given that the district he’s lived in for years, Ward 1, is itself up for election this year. But the incumbent, Vincent Sarmiento, is believed to be running for re-election, which would present a much tougher battle for Solorio – as well as risk upsetting fellow Democrat elected officials – than running for an open seat.

There’s also speculation among City Hall observers that Solorio may be preparing for a run for mayor in 2018. When asked if there’s truth to that, he neither confirmed nor denied it.

“Right now I’m just focused on giving back to the city and the City Council,” Solorio said.

Solorio came under scrutiny last year for staying at a $400-per-night luxury hotel suite in Las Vegas on the taxpayers’ dime when he attended a conference as a Rancho Santiago Community College District board member.

The corner suite at the Aria Resort & Casino, where he stayed two nights, featured a floor-to-ceiling panoramic view of the Vegas skyline, separate living and dining rooms, three high definition televisions, free private limousine rides to and from the airport, and an in-suite wet bar, Voice of OC revealed in December.

Solorio defended the spending as being for the cheapest room available at the hotel during the conference.

Since last February, Solorio has worked as a lobbyist at the firm Nossaman LLP. The firm’s clients include Orange County’s toll roads agencies, the trade group for California car mechanic shops, the Orange County Water District, and Golden State Water Company, which is the water provider for much of North Orange County.

Nossaman is known locally for its involvement in a failed effort to privatize the OC fairgrounds.

The firm was part of an effort by fairgrounds board members to lobby state legislators in 2009 in favor of the privatization. Former state Sen. Dick Ackerman (R-Irvine) helped lead Nossaman’s role in the lobbying effort, and came under review as part of two different District Attorney investigations. Both probes cleared him of criminal wrongdoing.

Solorio was one of the legislators who Ackerman spoke with about the fairgrounds privatization effort when Solorio was in the state Assembly.

Santa Ana’s ward election system functions differently from the district-based elections about to be implemented in cities like Anaheim. While Santa Ana council candidates must live within the ward they seek to represent, they are elected at-large by the entire city’s voters.

Nick Gerda covers county government and Santa Ana for Voice of OC. He can be reached at ngerda@voiceofoc.org.