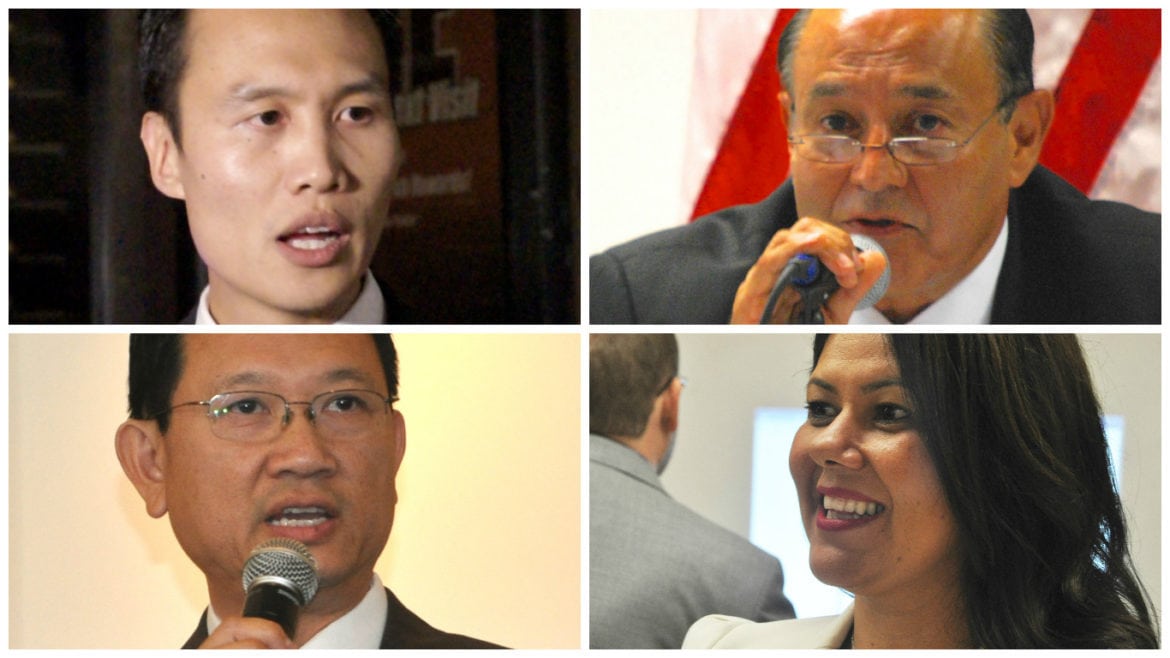 With three months until the November  election, incumbent First District Supervisor Andrew Do and former state Sen. Lou Correa are holding onto the large fundraising leads they enjoyed during the primary season in their respective races for supervisor and U.S. House seats, according to the most recent campaign finance disclosures.

But, as the June primary showed, winning the money race doesn’t guarantee victory on Election Day. Do’s opponent, Michele Martinez, who did relatively little campaigning or fundraising ahead of the primary, still won a surprise victory — beating him 38 to 34 percent.

Do raised $65,497 between May 22 and June 30, according to his campaign’s latest filings. He’s raised a total of $330,380 for this election cycle alone and has spent close to half a million dollars defending his seat on the board.

Martinez has also benefited from $14,000 in mailers against Do paid for by the California Future Fund political action committee. New campaign disclosures show the fund received $10,000 from the Association of County Deputy Sheriffs and another $8,000 from the Orange County Professional Firefighters Association.

The First District, which encompasses Santa Ana, Garden Grove, Westminster, unincorporated Midway City, and parts of Fountain Valley, has the largest advantage in voter registration for Democrats than any other supervisorial district.

Democrats make up 44.8 percent of registered voters in the district compared to 28.9 percent who are registered as Republicans, according to data from the Orange County Registrar of Voters.

But despite facing a registration deficit, Do’s incumbency gives him a distinct advantage when it comes to fundraising. Consider that Do, who sits on the board of CalOptima, the county’s medical insurance for the poor and elderly, received $29,450 from medical industry groups and doctors between May 22 and the end of June.

In the contest for the U.S. House seat being vacated by Loretta Sanchez (D-47th), Correa, like Do, is trouncing his opponent.

Correa, who easily won a crowded primary with 43.7 percent of the vote, raised $156,726.34 in contributions between May 19 and June 30, and a total of $572,802 so far in the election cycle, according to a July 15 campaign disclosure filed on the Federal Election Commission website.

By comparison, Garden Grove Mayor Bao Nguyen — the second-place finisher in the primary and Correa’s November opponent — has raised just $39,511.30 over the same period, or $193,080.72 in this election cycle.

Correa’s campaign has relied in part on a Democratic online fundraising platform called ActBlue Technical Services to generate $146,559.34 in donations since June 2015.

The fundraising platform charges campaign committees a transaction fee to generate webpages, emails and other online forms to streamline fundraising, according to the New York Times. The site also stores donors’ credit card information, meaning the normal paperwork required for a campaign donation is reduced to a single click of the mouse.

Correa has also benefited from another half million in outside spending by other political action committees.

Bolstering Correa’s lead was an endorsement last week by Sanchez herself, who is running against Attorney General Kamala Harris for Senator Barbara Boxer’s seat.

Nguyen, who has attempted to piggyback off the success of presidential candidate Bernie Sanders, is relying largely on small donations from Orange County residents and a number of out-of-state individuals.