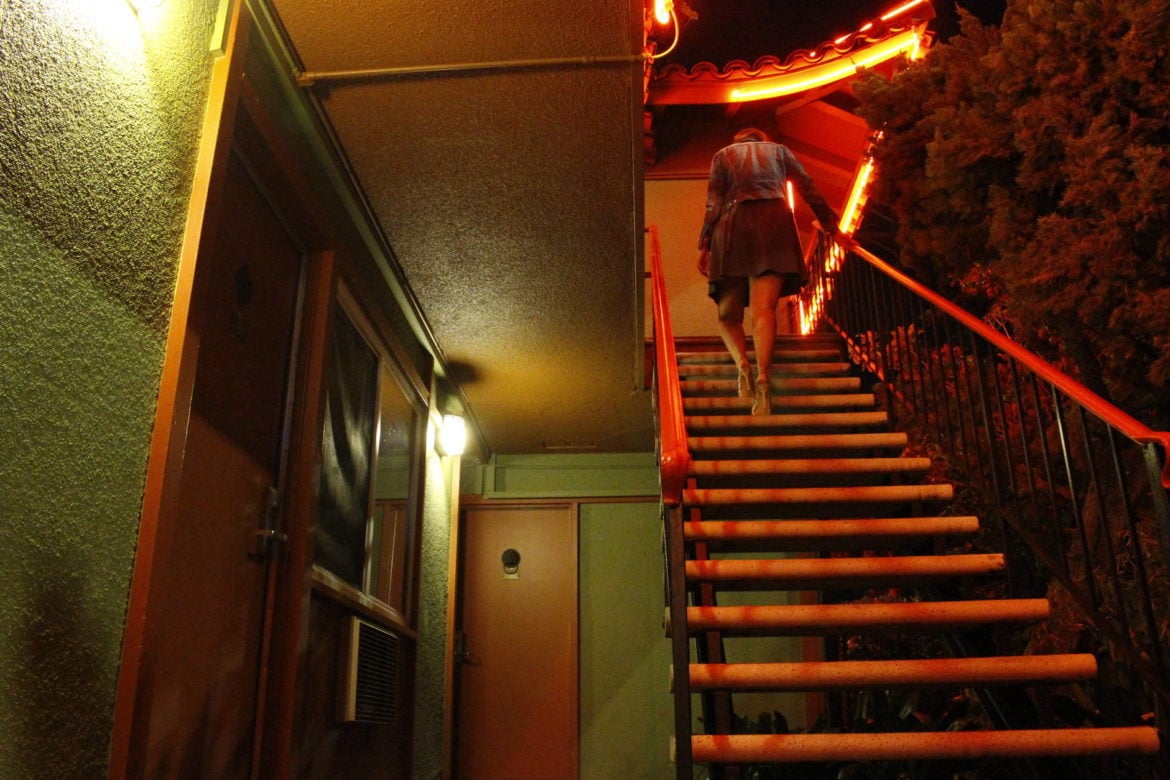 Photo illustration by Caitlin Whelan for Voice of OC.

Sgt. Juan Reveles of the Anaheim Police Department told an audience at a recent conference that people imagine human trafficking to be like the movie “Taken,” a story of international kidnaping and sexual slavery.

But, Reveles said, this notion is largely inaccurate in Orange County. When it comes to victims of human trafficking, “we have yet to find a foreign national,” he said. “It’s domestic.”

Among local police and advocates, human trafficking is now the preferred term for what used to be known as pimping, and prostitutes are now referred to by a different name as well — victims. And the pimps are just as likely to set up shop on the internet as they are on a street corner.

These changes go beyond semantics — they have sweeping implications and signify what most argue is a far more humane and effective response to prostitution, a crime that many have long dismissed as victimless.

Orange County has won awards for its efforts to fight human trafficking, and law enforcement agencies throughout California have looked here for training. But the county’s approach has also been criticized, with researchers, attorneys, activists, and some sex workers themselves, raising key concerns.

For one thing, advocates say authorities often put too much emphasis on sex trafficking and not enough on trafficking in forced labor, particularly in ethnic communities. And some adult sex workers have said police put undue pressure on them to act as informants.

A Shift in Approach

Since 2004, the local fight against human trafficking has been spearheaded by Orange County Human Trafficking Task Force, a coalition of police agencies and social service organizations. In 2012, the task force was given more ammunition with the statewide passage of Proposition 35, which allowed pimps to be prosecuted under trafficking charges that carried longer sentences.

Then, in 2013, the Orange County district attorney’s office created the Human Exploitation and Trafficking (HEAT) unit. As a result, the number of trafficking prosecutions jumped from 11 in 2012 to 79 in 2015.

The task force also works with churches that have created human trafficking ministries to help victims and raise awareness. Some especially zealous church members have tried to rescue victims on their own, something the task force discourages.

In its most recent annual report, released last week, the task force reported that it assisted 225 victims in 2015, up from 145 the previous year. Of these, 75 percent were victims of sex trafficking and 22 percent were exploited for their labor, with 3 percent in “unknown” or combined categories.

Some question these figures and argue that the number of victims of slave labor are significantly underreported.

“Exploited and enslaved labor in Orange County is a huge deal,” said Sandie Morgan, who works with the task force and heads the Vanguard University Global Center for Women and Justice in Costa Mesa.

“We are a very affluent county and we love all our services. We like to have someone do our nails, clean our houses and do our yard work,” Morgan said.

Morgan pointed to high profile cases of foreign-born restaurant workers in California who have been confined, controlled and even physically abused by employers, as well as domestic servitude cases in Orange County.

“You find what you look for,” said Morgan, who is calling for more labor trafficking awareness and enforcement to balance the task force’s current “vice orientation.”

Yvon Nguyen, who is on the Vietnamese American Chamber of Commerce board, is hoping to work more closely with the task force on exploitation of Asian-born workers in restaurants and in private households. Many of these workers are afraid to speak up for themselves and don’t know English or their rights.

“To penetrate a community like this you have to earn trust. You really have to spend time,” she said. “If you gain the business community’s trust, you’re more likely to assist in spreading the awareness.”

Defining Who Is a Victim

The most vulnerable to trafficking are children, and victims can be as young as 11 or 12, said Jim Carson, a victim advocate with 25 years in the child welfare profession, specializing most recently in foster youth at Orangewood Foundation in Orange.

“We have survivors who have been trafficked from ages 11 to 18,” Carson said. “They’ve had pimps and been forced to sell themselves thousands of times … children can’t be prostitutes.”

While there is no disagreement that children involved in sex trafficking should be considered victims, things get murkier when it comes to adults, said UC Irvine School of Law Professor Jennifer Chacon.

“There are two distinct camps,” Chacon said. According to one side, “all sex work is trafficking and inherently coercive. A contrary school says some sex work is voluntary, and it should be regulated as voluntary labor.”

UC Irvine Political Science Professor Charles Anthony Smith is among those who believe that not all sexual transactions among adults are coerced. He said the internet has allowed some sex workers to be in business for themselves.

“If you are getting paid by PayPal beforehand, then you don’t need a pimp,” he said.

But he and other experts also believe that even when adults choose to work in prostitution, that choice is commonly borne of economic vulnerability and trauma at home.

The most common risk factor among sex workers on the West Coast is being a woman of color who spent time in foster care, Smith said. Chacon added that migrant workers are another group highly vulnerable to being trafficked.

Still, pimps – and not poverty and neglect – remain the focus of anti-trafficking efforts. “It’s easier to say there are bad men out there… an easier problem is to get mad about than endemic poverty,” Chacon said.

Meg Munoz, an activist in Orange County who provides support to sex workers through a nonprofit called Abeni, believes that trafficking is more complex than is sometimes acknowledged, based on her own contact with women in the trade as well as having worked in the field in her youth.

Looking back on her experience years later, “I realized I was trafficked,” Munoz said, but, “It didn’t look like textbook trafficking.”

That’s because it occurred through a close relationship and not a street pimp.

Munoz’s approach to helping people in the sex trade has evolved since she began doing it several years ago. She said she first went in with a “rescue mindset,” dropping by strip clubs to offer dancers cookies, lip gloss and the phone numbers for a food bank and homeless shelter. But she came to realize that they found her gestures condescending.

Now she offers whatever support is requested, whether it be help transitioning out of the industry or something akin to life coaching. She said sex workers’ troubles are often economic, and she commonly hears complaints such as, “I don’t want to be here but my mom has these massive medical bills, and she can’t go back to work.”

Among the biggest problems sex workers face is finding a regular job with an arrest record, she said. Prostitutes and johns continue to be arrested in Orange County.

Munoz said many prostitutes tell her they are frustrated by police pressure to testify against the traffickers they fear or face charges themselves. In these cases, women are feeling what Chacon called, “the coercive power of the state.”

Reveles, who currently leads the task force’s enforcement efforts, spoke to this issue at a conference in Irvine this summer. “Our biggest hurdle is that they [women in the sex trade] don’t identify themselves as victims,” he said.

‘It’s Never Been a Dream of Mine’

Anaheim police Lt. Craig Friesen disputes claims that police place undue pressure on sex workers to identify as victims. And, he said, regardless of the level of cooperation the Anaheim police officers get from sex workers they come in contact with, it’s the department’s policy to have the task force’s victim advocacy arm, Community Service Programs, reach out and offer support.

Sometimes victims appreciate getting help and later volunteer to testify, he said.

Further, Friesen discounts the idea of sex work as a choice. “I can say with 100 percent certainty that I never met a prostitute who got into it voluntarily,” he said.

“When we started asking girls, ‘why are you out here doing this?’ We started hearing stories: ‘It’s never been a dream of mine to be in this line of work. I came from a broken home, met a pimp, he fed me a line and I was forced to have sex with strangers 10-15 times a day.’”

Friesen and others interviewed for this article compared the human trafficking experience to domestic violence, saying that it’s common for highly traumatized victims to step forward to testify, then recant. Victims also sometimes return to the sex trade when it’s a life they’ve known from a very young age.

“Former victims will call me and say, ‘Hey I graduated from high school and I’m going to college or I’m getting married’,” he said. “We’re trying to help people get a new lease on life. This is the most rewarding position I’ve ever had.”

Amy DePaul is a Voice of OC contributing writer and lecturer in the University of California, Irvine Literary Journalism program. You can reach her directly atdepaula@uci.edu.