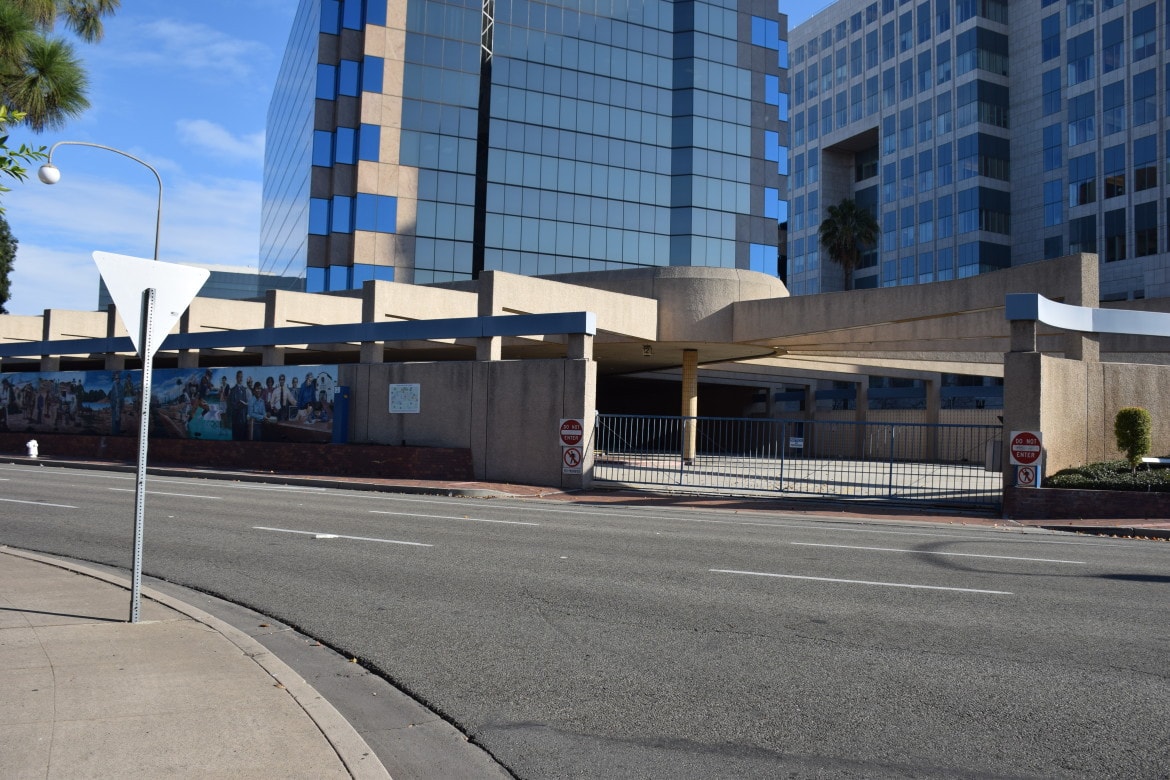 The abandoned bus terminal in Santa Ana that is now slated to be used for a homeless services center.

In a move they described as a major step toward addressing the Civic Center homelessness crisis, Orange County supervisors on Tuesday approved no-bid contracts to turn a former downtown Santa Ana bus depot into a homeless services center.

The Los Angeles-based non-profit The Midnight Mission will receive up to $1.4 million over the next year to run a 300-bed shelter and service center at the now-shuttered Santa Ana Transit Terminal adjacent to the Civic Center, which is home to a 400-plus-person homeless encampment. The goal is to have it up and running by next Thursday.

The so-called “Courtyard Transitional Center” will include 24/7 security, along with “training services, permanent housing options, health care, mental health services, substance abuse treatment and veteran assistance services,” according to a news release from Supervisor Andrew Do, who led the push among supervisors for the service center.

“Understand that this is historical,” Do said at Tuesday’s supervisors meeting. “This effort is the culmination of many years of the county working to get to this point.”

In its proposal, The Midnight Mission – which operates a homeless shelter in Los Angeles’ Skid Row – said its goal in Orange County is “to be low barrier and engagement rich to provide people experiencing homelessness a pathway to service connections, healthcare, housing and stability.”

Under Tuesday’s unanimous contract approvals, the Long Beach-based nonprofit City Net will also manage nonprofit organizations that distribute food and other assistance at the Civic Center. It will receive up to $300,000 over the next two years.

Supervisor Todd Spitzer said he agreed with Do that this is “a major event” in the county’s history. “Our work will help these people regain their lives,” he said.

Supervisors’ Chairwoman Lisa Bartlett said the goal is to serve homeless people and eventually get them into housing. “It’s kind of a stepping-stone process,” she said.

Homeless advocate Lou Noble told board members that given the scale of the homelessness issue, the new center is “gonna be just a little bit of a bandage on a big wound.”

As the Civic Center homeless population has ballooned in recent years, there has been a rising chorus of complaints about an unsafe and unsanitary environment in the public plaza.

Reports of assaults and other crimes are up significantly over the past year. And last month Santa Ana police shot a homeless man in the Civic Center during an altercation. Richard Gene Swihart later died from his injuries.

Public health advocates have also been sounding alarms, with warnings that the crowded conditions and lack of adequate bathrooms are attracting vermin and causing the spread of disease.

Until recently, county and Santa Ana officials have mostly clashed and over possible solutions and who should shoulder the responsibility.

But in late August, KFI-AM radio hosts John and Ken aired a series of highly critical shows on the situation that forced city and county officials to act.

The radio hosts lambasted both Do and Santa Ana Councilwoman Michele Martinez – who are competing against each other for Do’s seat in the November election – for not doing more to clean up the area. John and Ken noted that hypodermic needles and human feces are often found at the Civic Center, including needles at the city’s main public library.

Do committed during the Aug. 31 show to having the county start providing homeless services in the abandoned bus terminal within 30 days if the city doesn’t stand in the way.

That same day, Santa Ana Councilman Vincent Sarmiento announced that he and Martinez had co-authored a proposal urging the county to do just that, which was approved by the full council on Sept. 6. Also that day, county supervisors approved getting the service center up and running and trying to coordinate with Santa Ana within 30 to 45 days.

The county did not conduct a competitive bidding process for the Midnight Mission and City Net contracts, and county documents indicate that no other potential vendors were contacted. There was not enough time to do a bidding process within the board’s 30-day directive on Sept. 6.

The county finalized its purchase of the bus terminal in May, but there were no public plans to use it for homeless services until Do’s announcement on the Aug. 31 John and Ken show. County spokeswoman Jean Pasco said discussions with The Midnight Mission began after the Sept. 6 board directive to convert the bus terminal.

Do said The Midnight Mission “has a great track record” in LA when it comes to serving homeless people, including veterans and people with mental health issues.

He also said the county is planning a homelessness forum at the Hall of Administration on Oct. 15, which will focus on “a comprehensive solution” to homelessness in Orange County. There will also be a special study session for supervisors about the issue on Oct. 18.