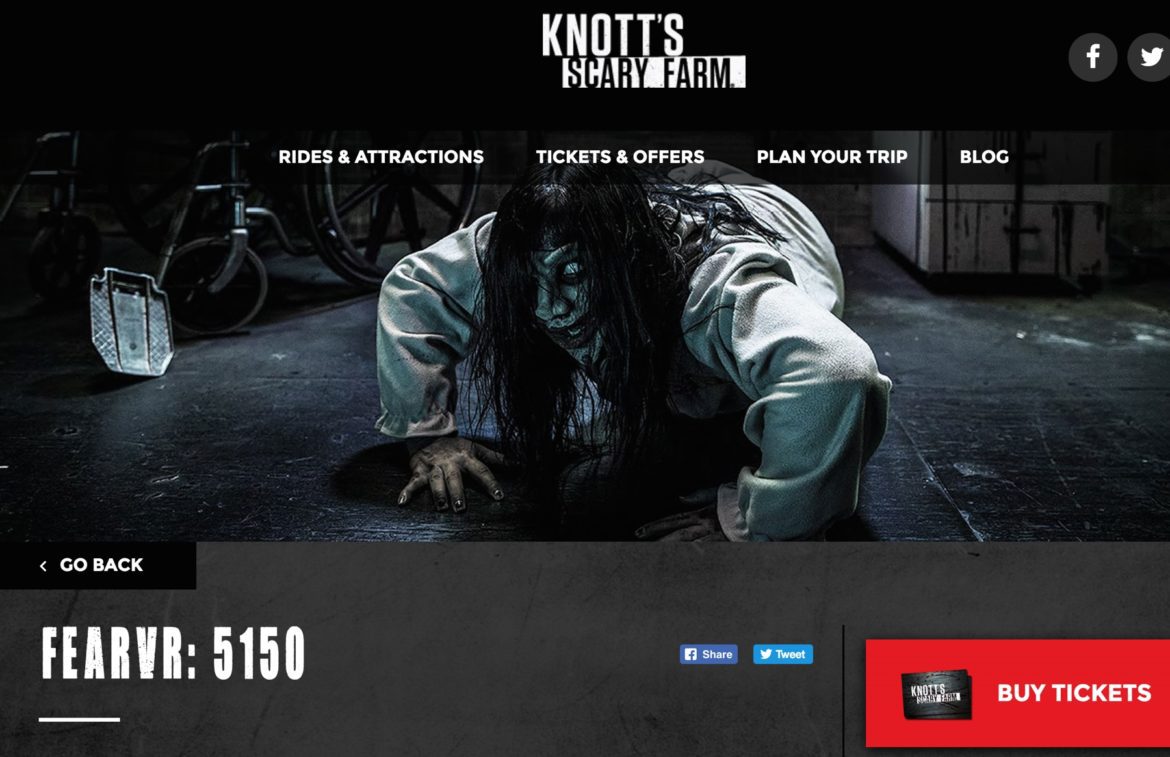 The original promotional website for the Knott's Scary Farm attraction.

Less than a week after it opened, Knott’s Berry Farm Tuesday shut down a Halloween attraction criticized by mental health advocates for perpetuating the social stigma of mental illness.

“As it is impossible to address both concerns and misconceptions in the Halloween timeframe, at this time we have decided to close the attraction,” Knott’s said in a news release. The attraction opened six days ago at Knott’s Berry Farm in Buena Park and was scheduled to run through Oct. 31.

The virtual reality show also was closed at the two other Cedar Fair Entertainment amusement parks where it was running — Santa Clara’s California’s Great America park and Canada’s Wonderland park near Toronto, according to an email from Knott’s.

Ron Thomas, whose mentally-ill son, Kelly Thomas was beaten to death in 2011 by Fullerton police, applauded the decision to shut down the show.

“I think it’s fantastic,” he said in a telephone interview. “They did the absolute right thing.”

Leaders of the National Alliance on Mental Illness (NAMI) in Orange and Los Angeles counties also praised the close down.

“From the outset,” they wrote to Cedar Fair executives, “we felt this was an inappropriate entertainment concept for your family-based attractions as it further stigmatized the millions of Americans suffering from mental illness across America.”

Thomas said the announcement came as activists were planning demonstrations for Thursday outside Knott’s and he learned of the closure while on the telephone with Los Angeles Times columnist Steve Lopez, who was preparing a column about the issue for Wednesday’s paper.

Thomas credited the combination of activists’ outrage and articles in Voice of OC and other media outlets for Knott’s decision.

But in its news release, Knott’s said “contrary to some traditional and social media accounts, the attraction’s story and presentation were never intended to portray mental illness.”

However, even before its Sept. 22 opening, the annual “Halloween Knott’s Scary Farm” show drew criticism from the Orange County chapter of NAMI and Ron Thomas.

The attraction was named “Fear VR: 5150.” The section titled “5150” in the California Welfare and Institutions code refers to the authority law enforcement has to hold someone for 72 hours at a psychiatric facility if he or she is considered a danger to themselves or others.

NAMI emailed a strongly-worded letter to Knott’s parent company the day before the attraction opened, objecting to using mental illness as scary entertainment.

The day the attraction opened, Knott’s changed the name of the show to simply FearVR. But Ron Thomas went to see the show that night. He said he couldn’t get in because it was sold out, but interviewed people as they left and based on what they told him “the message is clear. ‘The mentally ill are going to kill you.’ It’s just wrong. Totally wrong.”

According to a Los Angeles Times preview article, the show took place in a mental hospital where a possessed patient “unleashes chaos throughout the hospital.”

The Orange County Register, in its Sept. 6 review, reported “the VR headset puts you in the middle of the action inside the hospital.

“One patient seems agitated and attempts to get up from a bed. Security officers try to subdue him. A nurse gives you a shot (which you will feel), knocking you out. When you wake up in the next scene, all hell has broken loose.”

Correction: An earlier version of this article incorrectly stated that Ron Thomas attended the Knott’s Halloween show last week. Thomas originally indicated to a Voice of OC reporter that he attended the show, but after the article was published he said he only interviewed others who had attended it.