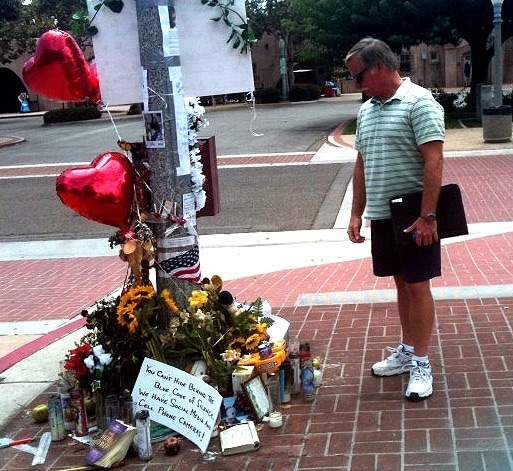 Wednesday, August 3, 2011 | Ron Thomas is a quiet man who doesn’t shout or call people names. But he just doesn’t go away.

Thomas, the father of mentally ill transient Kelly Thomas, who died after being subdued by six Fullerton police officers, is on a steady, meticulous campaign to learn exactly what happened to his son the evening of July 5.

And when his investigation is finished, he said, he hopes the information he uncovers means the courts will send the police officers to prison, that the upper echelon of the police department and some members of the City Council will be replaced and that the foundation he’s establishing in his son’s memory will have money to support organizations that help Orange County’s homeless mentally ill.

What Ron Thomas never will be able to do, he told the Fullerton City Council, is erase from his mind the final screams of his son, captured in a video by a by-stander as police repeatedly used a Taser and beat him: “Dad! Dad! Dad!”

Learning Your Child Is Mentally Ill

Kelly Thomas was 37 years old and living on the streets of North Orange County when he died.

His father recalled his son’s life as he sat on a bench at the Fullerton bus station just feet from an impromptu memorial of flowers, candles and balloons that marks the corner where Kelly received his fatal injuries,

Kelly was a drifter, his father said, spending time at favorite places on a circuit that took him from Cypress, where his father lived, to Placentia, Yorba Linda and Fullerton — all familiar neighborhoods.

If it wasn’t for the schizophrenia that developed in his early 20s, said Ron Thomas, his son could have lived with him or other family members or friends. But Kelly wouldn’t allow that.

Before schizophrenia set in, Kelly Thomas lived with his father — his parents divorced when he was young — and wanted to be a firefighter. But little by little in ways family members at first didn’t recognize as mental illness, Kelly Thomas began to change.

The first changes apparently were the kinds of things that could be associated with the ups and downs of maturing. His personal hygiene deteriorated, and he began spending more and more time away from home, supposedly with friends.

But then, said Ron Thomas, the family discovered “nobody knew where he was.” Even that didn’t seem to be a sign of mental illness.

But when Kelly Thomas informed his family he didn’t want to sleep in a bed anymore and preferred the floor, Ron Thomas said “we knew we had a problem.”

The family was able to get help for Kelly, including medication to control the schizophrenia. But the medications also made him feel tired all the time.

At one point, he moved to a Fullerton board and care home only blocks from the bus station. In that supervised environment, he took his medications on time and honored the home’s curfew. “He’d get better,” said his father.

But once he was feeling better, Kelly Thomas, like many adults under the power of serious mental illness, would say, “Dad, I don’t need to take this medication anymore.”

He didn’t like the way it made him feel. And he’d say of the board and care home, “I don’t need to be here.”

“He would stay for months at a time at different board and care homes, and then it would be ‘I’ve got to get on the road again’ type of things,” said his father.

“Kelly wasn’t homeless at all. He had many homes he could have been at,” said Ron Thomas. “He was a drifter. It’s part of the schizophrenia. They want to get on the road again.”

For the family, he said, dealing with a child with that form of mental illness is very difficult. Those who aren’t familiar with schizophrenia or other causes of mental illness that cause homelessness don’t understand what’s going on.

But, he said, under the law, “unless he’s a danger to himself or others or committing a crime, he’s a free citizen over 21 years old.”

Since Kelly’s death July 10, Ron Thomas has dedicated himself to discovering exactly what happened and why.

And he’s going about it in exactly the way he was trained in the U.S. Army, at the Orange County Sheriff’s Department and as an insurance investigator.

Using self-discipline and an unwavering focus on his goals, Ron Thomas says he already has provided witnesses to aid the district attorney’s investigation.

But he’s far from finished.

For example, he said, Bruce D. Praet, a lawyer working for the city, invited Kelly’s parents to lunch and made a $900,000 settlement offer without specifying exactly what they were settling.

“The whole lunch was about nothing else but would we be open to settling out of court,” said Ron Thomas. And then, his voice still quiet, he repeats what he said the lawyer told him: “Let’s face it, Ron, Kelly was no rocket scientist.”

Thomas rejected the settlement offer. But how did he react to that comment about his dead son? In a subsequent telephone conversation, Ron Thomas said he told the lawyer “how insensitive he was.”

The six officers who helped subdue Kelly Thomas have been put on administrative leave, but it took the police department weeks to do it.

The Los Angeles Times reported Wednesday that attorney Michael D. Schwartz, who represents the officers, said “no excessive force” was used and that Kelly Thomas was combative with officers. Witnesses have said officers used force when Kelly Thomas wasn’t resisting.

As for Ron Thomas, he said he will continue his determined effort to obtain “justice for Kelly.”

In the process, he said, he hopes the public will come to understand more about mental illness and its impact.

According to a variety of homelessness and mental health statistics, mental illness afflicts 20 percent to 40 percent of those who live on the streets.

Each Saturday from 9 a.m. to 1 p.m., Ron Thomas and supporters gather in front of the police department to protest Kelly Thomas’ death.

Ron Thomas calls himself mentally disciplined. “I honestly feel the police came out not only to teach him [Kelly] a lessen but to drive the entire homeless population from the downtown Fullerton area. In other words, ‘leave or you’re next.'”

At the curbside memorial by the bus station, people continually walked to the memorial. Some brought flowers. Others stopped to look at pictures of Kelly Thomas and read notes and prayers left on the ground.

One of those who stopped and recognized Ron Thomas was retired San Bernardino Superior Court Judge Craig Kamansky, who lives in Brea and was in the area to pick up a relative.

“This just has a bad feeling to it,” he said, referring to the circumstances surrounding Kelly Thomas’ death.

Then, 21 years of judicial experience taking hold, he added, “without prejudging, without knowing. I hope the truth will come out.”