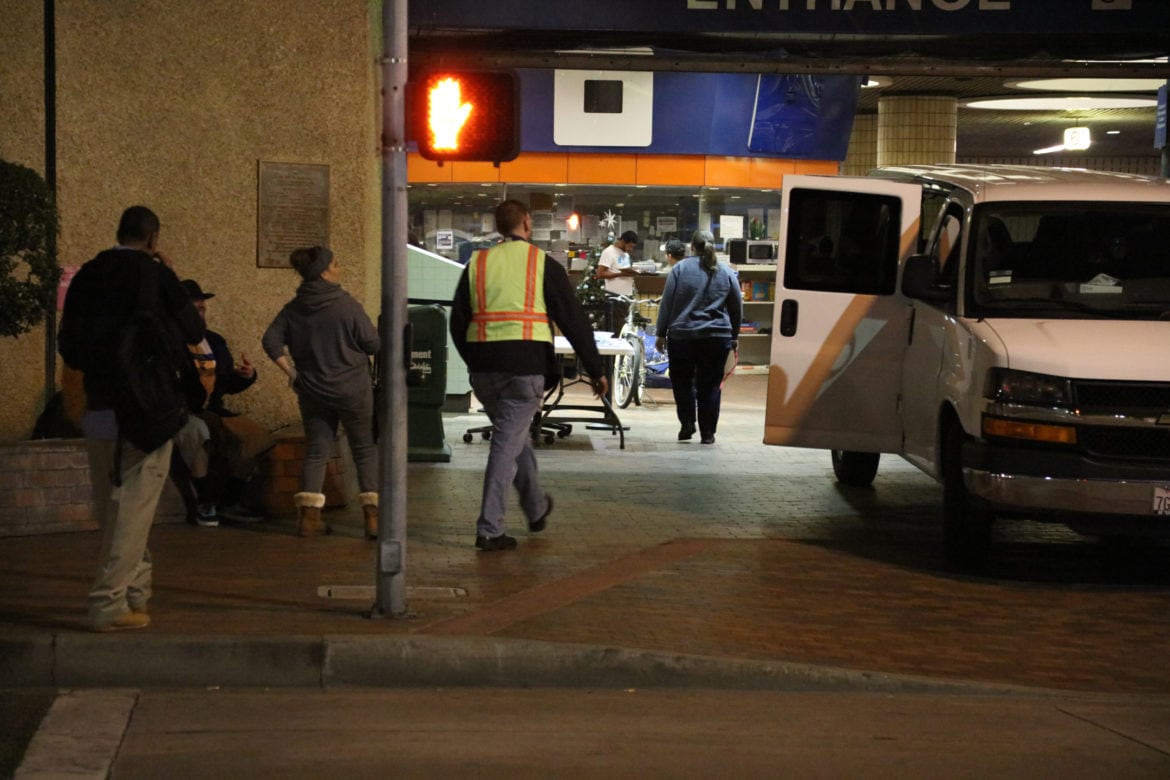 The scene on a weekday evening in front of the county's new homeless shelter in Santa Ana.

The Midnight Mission employee working security at the county’s homeless shelter in downtown Santa Ana was clearly angry with the homeless man shooting video of him from the public sidewalk in front of the shelter’s entrance.

And the employee wasted little time making his feelings clear. He confronted the man, Igmar Rodas — grabbed his camera phone — and, before the altercation was over, called Rodas a “bitch.”

Eventually, the employee radioed his supervisor and referred to Rodas as a “nut” during the conversation. The supervisor showed up, quickly de-escalated the situation and ordered the employee to leave.

While it certainly didn’t end as badly as it could have, that November incident is one of several examples of what some homeless people and their advocates have described as inappropriate, and sometimes combative, behavior by people placed in security roles by the Los Angeles-based nonprofit the county hired to run its new shelter in an abandoned bus terminal on Santa Ana Boulevard.

And a Voice of OC review of the county’s contract with The Midnight Mission revealed that many of its employees working security lack state licenses usually required for people who work such jobs. Some also appear to have serious criminal records, including one guard listed in the contract who a Midnight Mission official acknowledged is a registered sex offender.

While tight-lipped about the criminal records of specific employees, Midnight Mission officials say a key part of the nonprofit’s mission is to give a second chance to formerly homeless people — including some with criminal histories — who have turned their lives around and want to contribute to society.

“They are committed and dedicated to helping people who are once like they were,” said Georgia Berkovich, the organization’s director of public affairs. “We have found that people who have experienced homelessness have an extremely good rapport and empathy with those who are currently homeless.”

She continued: “People are not defined by their past. They have paid their debt to society.  They have been to hell and back and have turned their lives around.”

Local homeless advocates applaud the organization’s efforts to help people with criminal pasts get back on their feet. But some question the wisdom of putting employees with significant past behavioral issues and scant training in positions of authority over such a vulnerable population.

“I’m sure that some of the security guards are very thoughtful, but in my opinion anybody who works with a population like this should be very well trained in how to interact with people who have mental illness, physical disabilities, and who are under a lot of stress and pressure in their lives,” said Eve Garrow, a homeless policy analyst with the ACLU of Southern California.

“I haven’t seen any evidence that they have an educational background or training that would enable them to have the kind of professional knowledge that I think one would need to deal with a population that is this disabled.”

Longtime homeless advocate Dwight Smith, a Catholic Worker who frequently serves food to the homeless within the shelter, was even more blunt in his assessment.

“I can’t think of a worse vendor, because clearly those people don’t have a whole lot of experience in dealing with hungry, lonely, angry people,” Smith said. “I think it’s incumbent upon the citizens to ask what the hell happened with their tax dollars.”

Issues at the shelter, which is called “The Courtyard,” that have been reported to the ACLU and Smith include:

Midnight Mission officials dispute the characterizations made by Garrow and Smith, saying their employees are trained in de-escalation tactics and experienced in working with homeless people.

“[The Midnight Mission] works to ensure the environment is safe and secure for all who participate in its program,” said Berkovich.

However, by its own admission, the organization only provides employees, who wear vests with the word “security” on them, with 6 to 10 hours of security training. Security guards licensed by the state, meanwhile, are required to receive a minimum of 40 hours of training.

When asked about the girl who had been denied entrance, The Midnight Mission’s CEO, Mike Arnold, has said it was a mistake made in the first days after the shelter opened in October, and that changes have been made to prevent something similar from happening again.

Berkovich declined to comment on the bullhorn wake-up call, and said Midnight Mission hasn’t received any complaints about the mat yanking.

“Based on our experience, there are a lot of ‘myths’ being circulated by a few disaffected people who are not allowed to enter the Courtyard anymore,” she said.

Arnold visited the Courtyard on Monday for over four hours, Berkovich added, and “was approached by many people thanking him for the program, and for keeping residents safe and secure.”

She added that Midnight Mission staff have been accosted by homeless guests of the Courtyard.

One of the staffers was “attacked by a guest of the courtyard and his leg was broken in 3 places,” she wrote in an email. “Because of his sobriety, he will not risk surgery or take anything for pain. As the result, he will be permanently disabled.”

County officials, including its top homelessness official Susan Price, declined to comment about the guards’ training and lack of licensing. They instead referred questions to The Midnight Mission.

The Midnight Mission was founded in 1914 and is one of the oldest homeless services organizations in the Los Angeles area. Its main program is providing 24/7 shelter for homeless people on Skid Row, where about 2,400 meals a day were served last year and an average of 150 people stayed each night.

In September, the Orange County Board of Supervisors awarded a one-year, $1.4 million contract to the organization to run the new homeless shelter, which was established in response to an explosion in the homeless population at the county Civic Center in recent years.

The Courtyard is seen by many advocates as a step forward for Orange County’s homelessness efforts.

More than 400 people now sleep there each night. And in addition to providing a place to sleep, the shelter serves as a central hub for food, showers, laundry and other services during the day.

And many homeless people have given Midnight Mission staff high marks for the way they run the shelter. But the complaints have also persisted.

Of the 11 names, five matched with convictions that include robbery, pimping and pandering, possession of drugs for sale, sexual assault, and rape. But without other identifying information, like middle names and birth dates, there is no way to know for sure whether the people in the court system are the same people as those on the Midnight Mission employee list.

While The Midnight Mission declined to fully specify who on the criminal convictions list has worked at the Courtyard, Berkovich indicated that some of the employees have criminal records.

One employee in particular, who is listed as a “security guard supervisor” in the contract, is a registered sex offender, Berkovich confirmed.

The court record shows that in addition to serving time for two counts of sexual assault in the 1980s, he was again sentenced in 1997 to eight years in state prison for pandering, a felony crime of recruiting or coercing someone to work as a prostitute.

In separate interviews, Berkovich gave conflicting answers about the man’s history at the Courtyard.

On Friday, she said that he worked at the Courtyard for a “short period.” But on Monday, when a Voice of OC reporter asked when he started and ended his work, she said that it turns out that while he applied for the job, he was “not hired.”

Yet his name remains in Midnight Mission’s contract as a security guard supervisor at the shelter.

Berkovich refused to confirm whether any of the other names on the employee list that matched with the court records were the same people, other than ruling out a different sex offender.

And while Voice of OC searched 11 names, there are at least 19 other people who have worked in security roles at the shelter, based on figures Berkovich provided. She declined to provide their names.

Officials in county CEO Frank Kim’s office would not acknowledge whether the county knows the names of any of the Midnight Mission guards.

A Lack of Licensing

While it’s not at this point possible to get a full picture of the employees’ criminal histories, there is no question that many members of the nonprofit’s security staff are not licensed security guards.

By allowing this, the county has diverged from longstanding policy at emergency homeless shelters. Both of the county’s cold-weather shelters, which are run out of the National Guard armories in Santa Ana and Fullerton by the local nonprofit Mercy House, require licensed guards.

While state law requires licensing for employees who wear security uniforms, it does have an exemption for nonprofit organizations. But it’s unclear if it applies in this case because The Midnight Mission is being hired to provide security at another organization’s facility.

One expert on the law says that either The Midnight Mission or its guards need to be licensed.

“If that [organization] was providing security to its own facility, there would be an exemption because they’re a nonprofit,” said Roy Rohn, executive director of the California Association of Licensed Security Agencies, Guards, and Associations.

“My evaluation of this: they are a contractor to the homeless shelter, which would require them to be a [licensed private patrol operator]…on the surface, it certainly appears that this is a problem.”

State officials with California’s Bureau of Security and Investigative Services (BSIS), which regulates security guards, haven’t given a clear answer about whether this situation is legal. But they said one factor is whether the shelter is on the nonprofit’s property, which it is not.

Berkovich, meanwhile, insists that no licensing is needed. “There is no requirement that if you wear a security vest that you have to be licensed,” she said.

Rodas, the homeless man involved in the the altercation with the guard, filed a complaint with the state agency on Nov. 30.

A spokeswoman for the bureau, Laurel Goddard, declined to confirm whether there’s an investigation of the Courtyard security arrangement, citing confidentiality rules. State law stipulates that illegal use of unlicensed guards can be prosecuted as a misdemeanor.