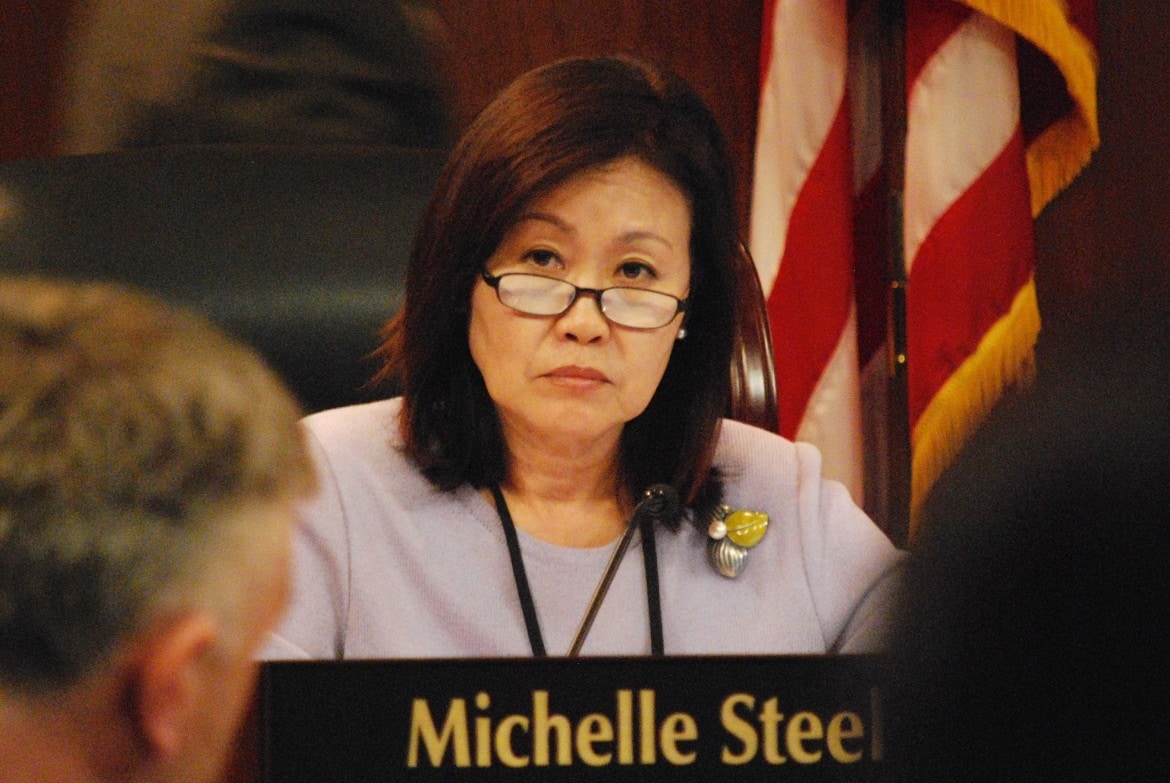 The ongoing crackdown on public comments by Orange County supervisors at their regular meetings has reached the point where how much time you have to speak apparently depends on who you are.

And no matter who you are, you better speak quickly.

Supervisor Michelle Steel, in her first meeting as chairwoman of the board, instituted a one-minute limit on speakers during this Tuesday’s meeting. But when it came time to impose the limit, she was more lenient with corporate executives than she was with county workers and homeless advocates.

This was the shortest speaking allotment in memory, and is the latest in a series of moves by supervisors in recent years to curtail public comments at their regular meetings, which are one of the few venues where county residents and employees have the opportunity to directly address their top elected officials.

Historically, members of the public could speak for up to three minutes per item on the supervisors’ agenda. This was in addition to being able to speak during a general public comment period about topics not on the agenda.

But things started to change in 2012, after local resident Michael Klubnikin irritated supervisors by using multiple agenda items at each meeting as a platform to accuse them of a conspiracy involving the seizure of his mother’s properties. They responded by capping commenters to a total of nine minutes of speaking per meeting.

Then, during their meeting on Election Day this past November, supervisors cracked down further by ending public comments when individual items come up.

From that day forward, each commenter was limited to a single three-minute speaking window per meeting, regardless of the number of agenda items they wanted to address. Then-Chairwoman Lisa Bartlett, who buried the proposed changes on page 110 of the meeting’s supplemental agenda, said her goal was to make “more efficient use of everyone’s time, particularly to the public.”

Bartlett’s proposal passed on a 4-1 vote, with Supervisor Todd Spitzer casting the dissenting vote. Spitzer said the new rule is unfair to constituents who came to speak about two or three different agenda items.

But even those limits weren’t enough for Steele when she realized that 58 people had submitted requests to comment at Tuesday’s meeting.

Some had come to speak about homelessness. Others were county social service eligibility workers speaking as part of their union about staffing and wages. And about half of all the speakers were there on behalf of companies seeking county contracts to service corporate jets and other private planes at John Wayne Airport.

After opening the meeting, Steel noted the number of speakers and asked County Counsel Leon Page what her options were.

Page said the board’s rules allowed her to shorten comments to less than three minutes per speaker when the total public comment period is expected to last more than 20 minutes. He added that Steel could ask groups to choose a single spokesperson to speak on their behalf.

Steel then turned to the county workers, noting the green AFSCME union buttons they were wearing, and asked the “green buttons” group to designate a spokesperson. They declined.

Steel responded by imposing her one-minute limit. And she made it a point to tell the workers that “comments are not [to be] repetitive. Make sure that, you know, we are not listening to the same thing.”

None of the other supervisors objected.

The first several speakers were executives with aviation companies, asking for supervisors’ votes on John Wayne Airport contracts up for a decision later that day. But when they went over the one-minute mark, they were allowed several sentences further, without interruption.

The president of a corporate jet services company, for example, spoke for a minute and a half before Steel politely asked him to “sum it up please.” She then let him speak for another 36 seconds, giving him a total a total of about 2 minutes of speaking time.

The very next speaker was Diana Corral, the workers’ union president. Steel handled her very differently.

“Make sure that you [take] just one minute,” Steel told her. Corral said she and her colleagues would comply and went on to say that the county’s eligibility workers are extremely understaffed and not able to respond to as many as 1,000 calls per month from people seeking assistance getting foster care support and health care programs for children.

The next employee who spoke went 30 seconds over the limit and received an irritated admonishment from Steel to “stay in one minute.”

Later, a hospitality manager for a jet company was allowed to continue speaking without interruption after the speaker light turned red about how her company could accommodate private jet fliers by arranging “a VIP wine tour and limo for a group of 20.”

Some commenters who spoke about poverty, homelessness and other low-income issues were given leeway to go over the minute mark, but several others were immediately cut off when the light turned red.

When it came time for Klubnikin to speak, he made his displeasure clear by mocking the supervisors in a deep voice.

“‘We don’t need no stinkin’ public comments. We’re the supervisors!’” Klubnikin said. “Shame on all five of you.”

He wondered aloud if anyone would be willing to sue the supervisors for violating the state’s open meetings law, the Ralph M. Brown Act. The law says public comment limits must be “reasonable.”

None of the supervisors responded to the criticism.

Update: This story has been updated to note that none of the other supervisors objected to the new limits.