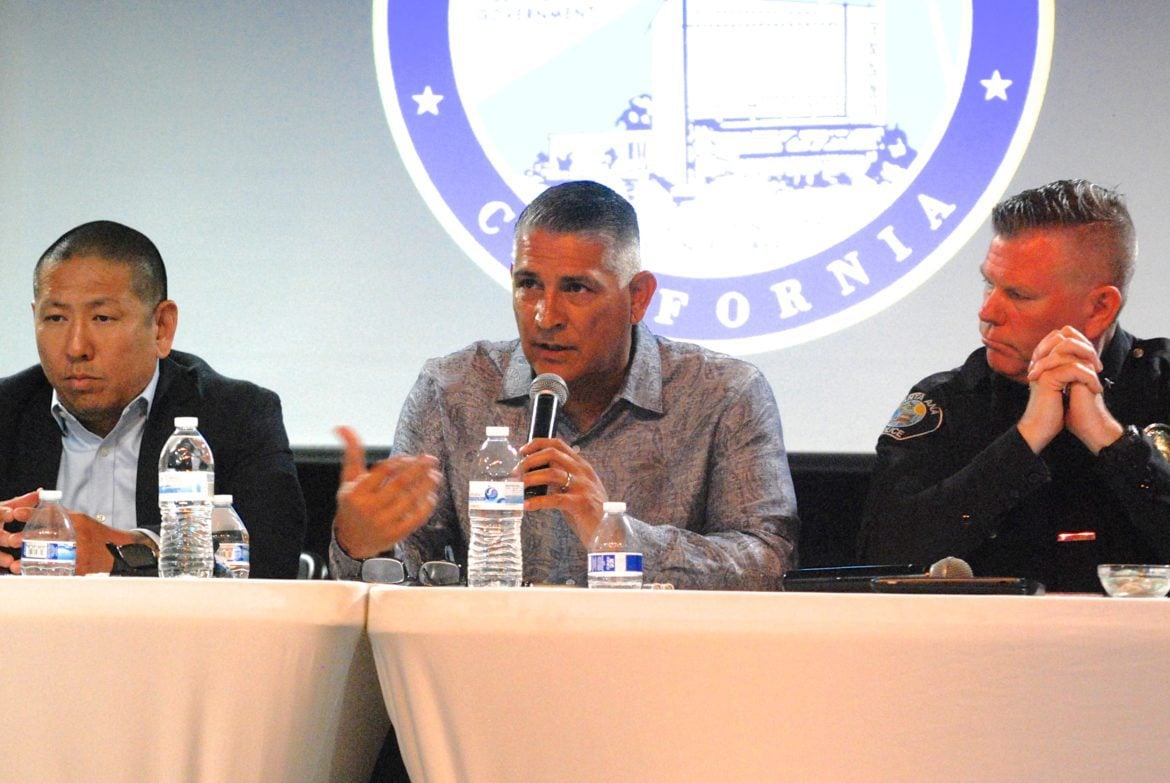 Nati Alvarado (center), a pastor and violence intervention worker with Neutral Ground, speaks at the forum last week. By his side are Steve Kim (left), an intervention worker and founder of Project Kinship; and Deputy Chief Doug McGeachy of the Santa Ana Police Department, who oversees the department's gang unit and homicide investigations.

More than 100 Santa Ana community members met last week in a new effort to improve collaboration on reducing violence among youth and gangs.

“Gang members like me got off the streets” because the city and county worked with businesses to find jobs for at-risk youth in the 1970s, said Mark Morales, who now works as a safety officer at the Loren Griset Academy continuation high school.

The meeting last Friday drew a wide cross-section of city leaders and residents – including top officials from the city, schools, police, and nonprofit groups – amid a tripling of shootings and doubling of murders in recent years. The increase has been largely attributed to gangs. 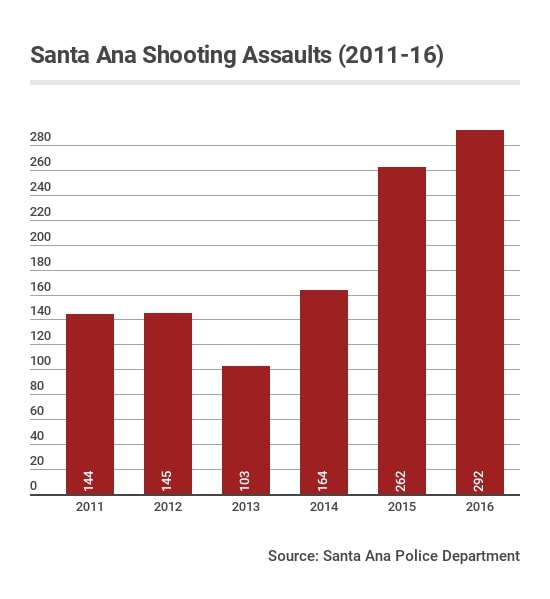 One of the latest victims of the violence was 15 year-old Isaac Gonzales, an up-and-coming boxer who police say was not in a gang, yet was shot and killed while walking near his home last month.

“It’s going to take a unified effort by the community” to stop the violence, said Councilwoman Michele Martinez, who organized the meeting with Valerie Amezcua, a Santa Ana Unified School District board member who also works as a county probation officer.

Among the follow-up actions explored at the meeting were: expanding job and internship programs for youth, designating a person to coordinate youth programs across the city, expanding intervention efforts when youth join gangs or commit acts of violence, and learning from successful models in other cities.

The gathering focused on building a coalition of people interested in reducing the violence, and bridging gaps between various groups that don’t typically collaborate. And most of the meeting was an open forum for the public to offer ideas and ask questions of officials.

Among the models discussed was the Watts Gang Task Force, which is credited with reducing youth shootings by two-thirds in the South Los Angeles neighborhood.

That effort brought together police, school, community, and city leaders into collaborative discussions with residents about reducing violence.

The Watts model was suggested by several people at the Santa Ana meeting, including Sean Garcia-Leys of the Urban Peace Institute, and was endorsed by the top school police officials.

“That has been a very successful program,” said Van Holt, the school police chief, urging Santa Ana community members to look into it.

Phillips, the school district superintendent, shared her experience growing up with a poor single mother in an area of Oakland that had a lot of gangs, which she said was similar to what many students face in Santa Ana. 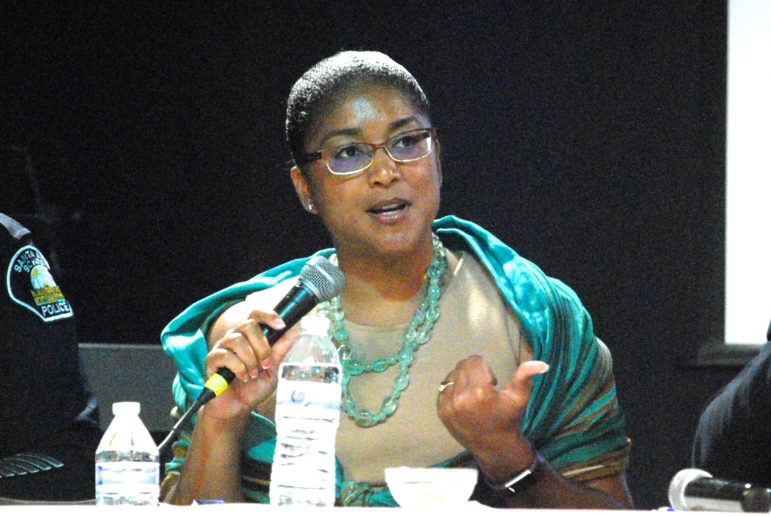 Philips speaks at the forum.

Phillips said her success “was about all the love and support that was poured into me,” from community organizations, parks and recreation, schools – all the people who “cared what happened to me.”

“It’s all about what we can do to help create new opportunities and new landscapes for our kids.” She asked community members to “please talk” with her and other leaders about how they can help.

“When we see the gang violence, when we see violence in our community, [it is] often just a symptom” of other issues in the home and community, Phillips said.

The school district has brought in two nonprofit groups to do violence intervention work on their campuses: Neutral Ground, headed by Alvarado; and Project Kinship, headed by Kim.

Alvarado and Kim said they focus on youth who are falling through the cracks and at-risk for committing violence – a population Kim described as those who have “traditionally been discarded.”

His job, he said, is about working with youth to see what they individually need, and working with partners to find resources to help them.

Alvarado, a former heroin addict who now is a pastor and intervention worker, said the work he and others do has helped turn youths around.

“We have kids that – though they are in neighborhoods, though they are identified [as] certain gang members – the majority of them, if they had a choice, they would not want to be involved” with gangs, said Alvarado.

When there’s a dispute at school that could lead to violence, Alvarado said intervention workers go to each side, get them to come to the table, and create a space to talk where the students are asked if they want to graduate and have a safe place to go to school and not get jumped. The students say yes, he said.

Matthew Cruz, the principal at César E. Chávez High School, said Alvarado and his group “really has made a difference” on the campus.

Cruz called for expanding a sense of “connectedness” between youth and community support. “That connectedness needs to be: we love you, we care about you, there’s a bright future for you, and we’re here to do that for you,” Cruz said.

One of the main points of agreement was that community members – including school officials, parents, youth, City Hall, nonprofits, activists and police – need to do a better job of communicating and working together on solutions.

Faith-based, nonprofit, and government programs in the city have been “fractured” into a “silo approach,” Martinez added, making them not as effective as they should be – something she said the city must “move beyond.”

She reiterated her call for a comprehensive approach like the Project Longevity effort in New Haven, Conn., which involves making clear to gang members that violence must stop, but that there is help – such as job training, housing assistance, and drug recovery programs – for those who want it. That effort led to a drop of five gang shootings and killings per month on average, according to a study by Yale University.

And in an effort to bridge the gap between various groups, there was widespread agreement that the city needs a point-person to coordinate youth programs, including creating a directory.

“We don’t have that central hub to say, hey, we’ve got” particular resources to help a young person, said McGeachy, the deputy police chief. “There’s a lot of churches out there and faith based organizations that want to help and really are looking for a way” to do that.

“The police department supports anything that we can do to begin to build jobs and build pathways” for people to move in “any other direction besides gangs,” he added.

About 50 people have signed up so far to help with the violence reduction effort, organizers said.

The group plans to meet next week to debrief and work on next steps. Amezcua said people interested in joining the effort can contact her and Alvarado at [email protected] and [email protected].

“We don’t have all the answers. But we do need to work in partnership with each other,” Amezcua said. “This is just the beginning of what we’re going to do.”