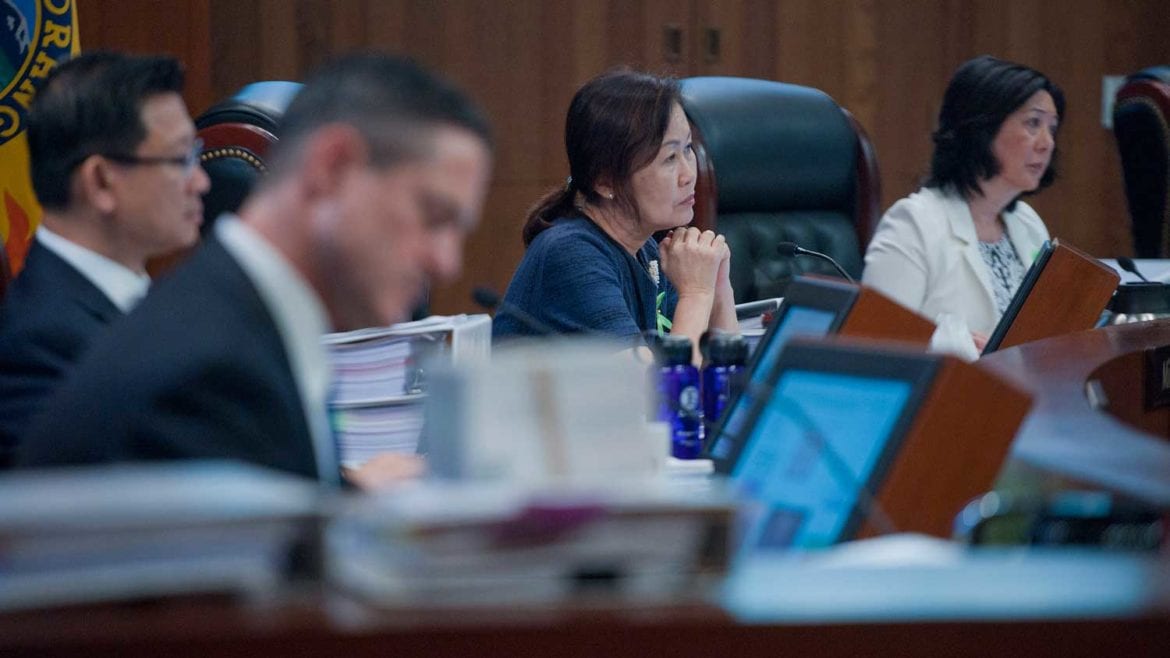 Jeff Antenore for Voice of OC

The four supervisors who voted for the homeless housing and support services this week. From left: Andrew Do, Todd Spitzer, Michele Steel, and Lisa Bartlett.

Orange County supervisors, acknowledging pressure from activists and others, are moving in a new direction to address the county’s growing homelessness, including encampments along the Santa Ana River near Angel Stadium and the Honda Center.

“Since the beginning of this year…we have received hundreds of public comments here in our meetings, specifically on homelessness, and in particular the Santa Ana riverbed,” Supervisor Andrew Do said as he opened the discussion at Tuesday’s Board of Supervisors meeting.

“This does not include the other hundreds of phone calls, letters, and emails directed to our individual offices.”

“Homelessness in this county…has reached a crisis point,” said Do. “If we do not take action, this crisis, especially the encampments, will pose dangerous risks to public safety, public health and the environment.”

At the request of Do and Supervisor Todd Spitzer, the four supervisors who attended the meeting authorized $5 million in new housing for homeless people with serious mentally illnesses.

They also voted unanimously to spend $750,000 between July 1 and the end of the year on support services for people living in homeless encampments. The funding will go to a yet-to-be-named organization, which would likely partner with other organizations to provide “intensive case management” and help “link” people to permanent supportive and transitional housing.

“We cannot allow the riverbed to become Orange County’s skid row,” Spitzer said. “And we are moving in that direction.”

The growing camps run along the riverbank, parallel to the 57 freeway, from Chapman Avenue, up to Angel Stadium and past the Honda Center. That portion of the river, which is usually a dry concrete channel but becomes a raging river during heavy rains, runs through the cities of Anaheim and Orange.

Noting the dangers during the rainy season, Spitzer said his goal is to get to the point “where that area is closed [to human habitation], permanently.”

But, he said, “I agree with the [public] speakers, those people are there. They’re living there.”

“While it is occurring, and until we come up with transitional options, we have got to treat these [homeless] people as human beings. They are human beings. And today, I will argue, I do not believe we’re being humane about it.”

The actions were approved on a single 4-0 vote, with Supervisor Shawn Nelson absent from the meeting. Cheers went up from the audience among activists, who for months have been calling for services at the riverbed and an expansion of permanent supportive housing.

Beyond the riverbed, other camps around the county include a large encampment in a plaza between Santa Ana City Hall and the county’s main courthouse.

When the services proposal was first announced last week, advocates for homeless people said there needs to be more housing for people living on the streets, given that thousands of people are already on waitings lists for the current housing supply.

That argument was echoed by Supervisor Lisa Bartlett.

“To really get handle and solve this issue, we need to get more permanent supportive housing,” Bartlett said at the meeting.

“Without the housing, at the end of the day, we’re going to have high amounts of [people returning to homelessness], and that’s going to be a vicious circle.”

Chairwoman Michele Steel has also endorsed an emphasis on housing, saying in a recent statement that she and other other supervisors “will continue to work to prioritize supportive housing.”

On Tuesday, Bartlett introduced an additional action to the homeless services proposal – which Do and the rest of the board approved – to direct staff to allocate $5 million in Mental Health Services Act funding towards permanent supportive housing.

The $5 million could support up to 50 housing units for homeless people with severe mental illnesses, according to county staff. About 20 percent of homeless people in Orange County would be eligible for that housing, based on county figures.

The new housing could come online within a year, depending on how the county works with cities and other stakeholders, Bartlett said in a follow-up interview.

For months, the supervisors had mostly ignored, and sometimes criticized, public commenters who called for more services and housing options for homeless people, including those living along the riverbed.

“I think some of the supervisors’ statements today are invigorating for activists…who are working on long term solutions,” said Mohammed Aly, an advocate who has organized public comment campaigns and leads the Orange County Poverty Alleviation Coalition.

He said it was the first time he’s heard supervisors “show they understand where we’re coming from.”

At the same time, he said, “the evidence of the county’s failure to address homelessness [is] impossible to ignore…unless you’re literally walking through the [Santa Ana] Civic Center with your eyes closed.”

And until the contract is up and running in July, he said, people at the riverbed will continue to go without bathrooms and basic sanitation.

“At last count around 800 people were experiencing chronic homelessness and thousands more were homeless and on the streets. The board is still committing no county [discretionary] funding to housing to end homelessness. And as mentioned in the meeting, the [mental health] funding can only be used to house people with serious mental illness,” Garrow said via text message.

“Further, we are concerned about the board’s push to move people out of the encampments when there is currently no permanent housing to link them to.”

Garrow and other activists are planning a large turnout at the county budget hearing next Tuesday, to urge supervisors to use discretionary dollars to expand housing for homeless people.

For the last several budget cycles – if not longer – the county hasn’t published a budget breaking down what it spends on homelessness and what kinds of additional funding could be used.

But in response to news media requests for that information, Kim, the county CEO, said it will be posted online before next week’s budget hearing and staff will be prepared to answer questions about it from the public.

The $5 million in housing funds comes from the Mental Health Services Act (MHSA), which is statewide tax on personal income beyond $1 million that counties use to fund mental health services.

And over the years, the county has accumulated $182 million in unspent MHSA funds in its accounts, according to staff. That’s in addition to a $71 million “prudent reserve” to keep existing MHSA programs running when revenues fall during economic downturns.

It’s unclear what the county plans to do with the $182 million surplus.

Under the supervisors’ action Tuesday, the new homeless services provider will be chosen by Kim, rather than the usual competitive bidding process and approval by supervisors at a public meeting.

Declaring an emergency, supervisors exempted the contract from those rules.

Spitzer said he has communicated with some of the potential providers, and that they have assured him they would be able to transition people out of the riverbed by a specific, yet-to-be-determined deadline.