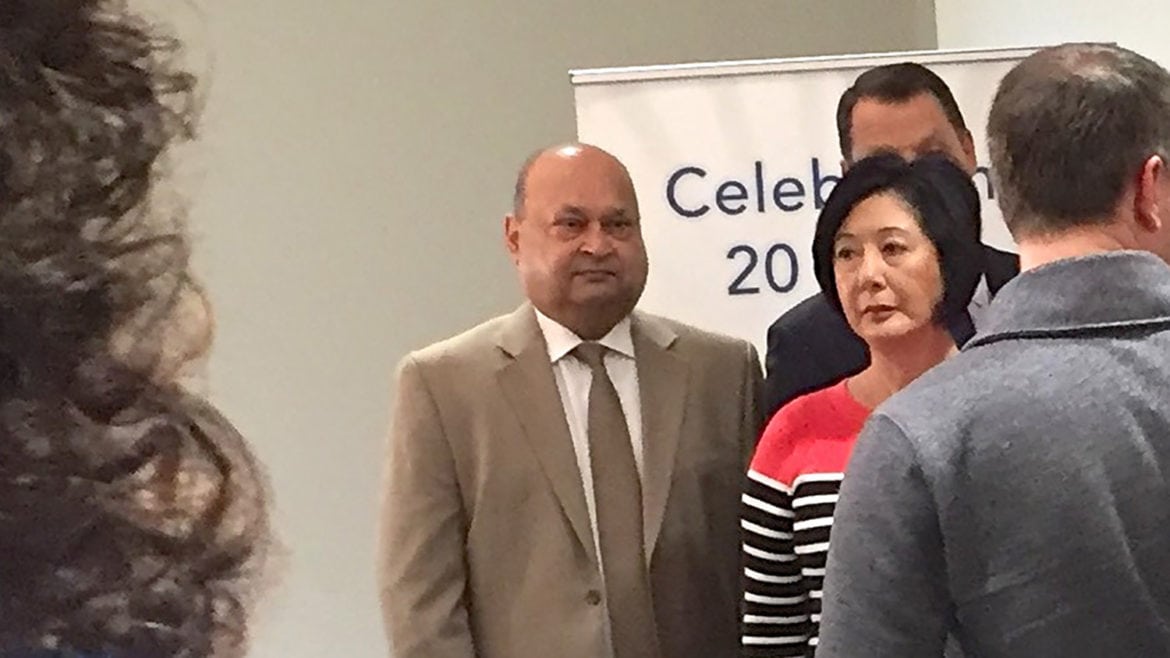 Peter Agarwal (center) at a CalOptima event in 2015.

Peter Agarwal, who was recently appointed as the first member of Orange County’s ethics commission, inaccurately claimed in his application that he is on the governing board of a national association for members of boards of directors.

In his application to the Campaign Finance and Ethics Commission, Agarwal summarized his qualifications, including organizations where he serves on the “Board of Directors.”

The first organization he listed is the National Association of Corporate Directors (NACD), a 17,000-member group for board members of corporations, nonprofits, and public agencies:

But Agarwal is not on the association’s 11-member board of directors, according to its spokesman. Agarwal later acknowledged in an interview that he’s never served on the board.

Instead, Agarwal is one of the association’s thousands of members. Both he and the spokesman said Agarwal has a group membership with the association for board members and executives from a single organization, known as “Full Board Membership.”

The association says this group membership costs $8,500 per year for up to 10 people, who receive access to training, networking events, and other resources.

NACD’s spokesman, William Brawner, said it would be inaccurate to equate being a member of the association with serving on its board of directors.

(Click here to read Agarwal’s full application. His claim to be on the association’s board is on page 5.)

Questions about Agarwal’s representation of his board of director status were first raised in a Voice of OC story June 27, a few hours before supervisors unanimously appointed Agarwal to the ethics commission at the request of Supervisor Shawn Nelson.

In reaction to the article, Agarwal asked for a correction, saying he was a “full board member” at the organization.

In a follow-up phone interview on June 28, Agarwal was asked about his listing of the association under the heading “Mr. Agarwal serves on the following Board of Directors.”

“I am a full board member,” Agarwal replied. “If you look at their website, I am fully credentialed to sit on large companies’ board of directors.”

“It’s not called board of director,” he added.

Asked why he listed the association in the section for boards of directors he serves on, Agarwal said: “No, that is how you’re reading it. [At] NACD, I am considered a full board member.”

Asked if he’s on the association’s board of directors, he said “no.” He later said he’s never served on its board.

Asked if his representation in the application was a mistake, Agarwal said he should have been clearer, but that he didn’t see the difference between his membership in the association and serving on its board of directors.

“Yeah that’s another clarification I should have given, that I’m not on the board of directors. But I am considered a full board member. I don’t know what is the distinction on that,” Agarwal said.

“It’s a paid membership, but only for the people who have been through…their courses. You simply can’t say here’s my $5,000 and give me my board membership,” he said.

“Once you have gone through credentialing process, then they give you that designation.”

Agarwal declined to say how much he paid for the membership.

“I don’t want to get into that,” he said. “It costs $8,500 for any organization to join, and then their members can go through their various programs and get credentials.”

Agarwal also acknowledged he inaccurately stated in his June application that he’s a current board member of the county’s public health care plan, CalOptima. He previously was on the agency’s board, but left last summer after county supervisors turned down his application to be re-appointed.

“I just printed out an old [document] and sent it in,” he said of listing himself as a current CalOptima board member.

“I wasn’t trying to misrepresent anything, it was just carelessness. I had no intention of doing that.”

And he said he was mistaken when he marked on his application that he has not been affiliated with any businesses or nonprofits in the last five years.

“It is just how I read it. I read it wrong. It was just an interpretation. Believe me, I’m not trying to hide anything,” he said, noting that in the application he disclosed his employment with Citizens Business Bank.

Nelson, who nominated Agarwal for the ethics position, didn’t return a message on his cell phone seeking comment.

And none of the other supervisors (Andrew Do, Michelle Steel, Todd Spitzer, and Lisa Bartlett) – all of whom voted to appoint Agarwal – returned phone messages.

Shirley Grindle, who co-authored the county’s campaign finance law and originally proposed the ethics commission measure, said Agarwal needs to correct his misstatement about serving on the national association’s board of directors, as well as the other inaccuracies.

“It’s misrepresenting the facts,” Grindle said in an interview in late June.

“These guys have got to be squeaky clean. And we can’t have a commissioner be appointed who’s lied on his application!” she added.

“He needs to correct it. And the sooner the better,” Grindle said. “If he doesn’t correct it…what does that make him look like, and the Board [of Supervisors] for appointing a commissioner who lies about stuff?”

In a follow-up interview on Monday evening, almost two weeks after he acknowledged he’s not actually on the association’s board, Agarwal defended his application and argued against updating it, saying it would invite false criticism.

“This thing, it’s open to interpretation. Didn’t get put in the right place [on the application]. That’s it,” he said.

Agarwal also partially disputed descriptions of his membership being “a paid membership,” which he himself called it in the earlier interview.

He said he hasn’t paid for his membership, but declined to say if it was paid by another person or group.

Asked if he sees it as important that he represented himself as being on the association’s board, he said: “You’re not questioning the 10 or 11 boards I was on [in the application] and I was right about it.”

“The intention was never for me to say that I was on the board of NACD.”

Asked if he made a mistake, this time he replied: “It is an interpretation.”

He reiterated that he didn’t intend to present himself as a board member of the national association in his application.