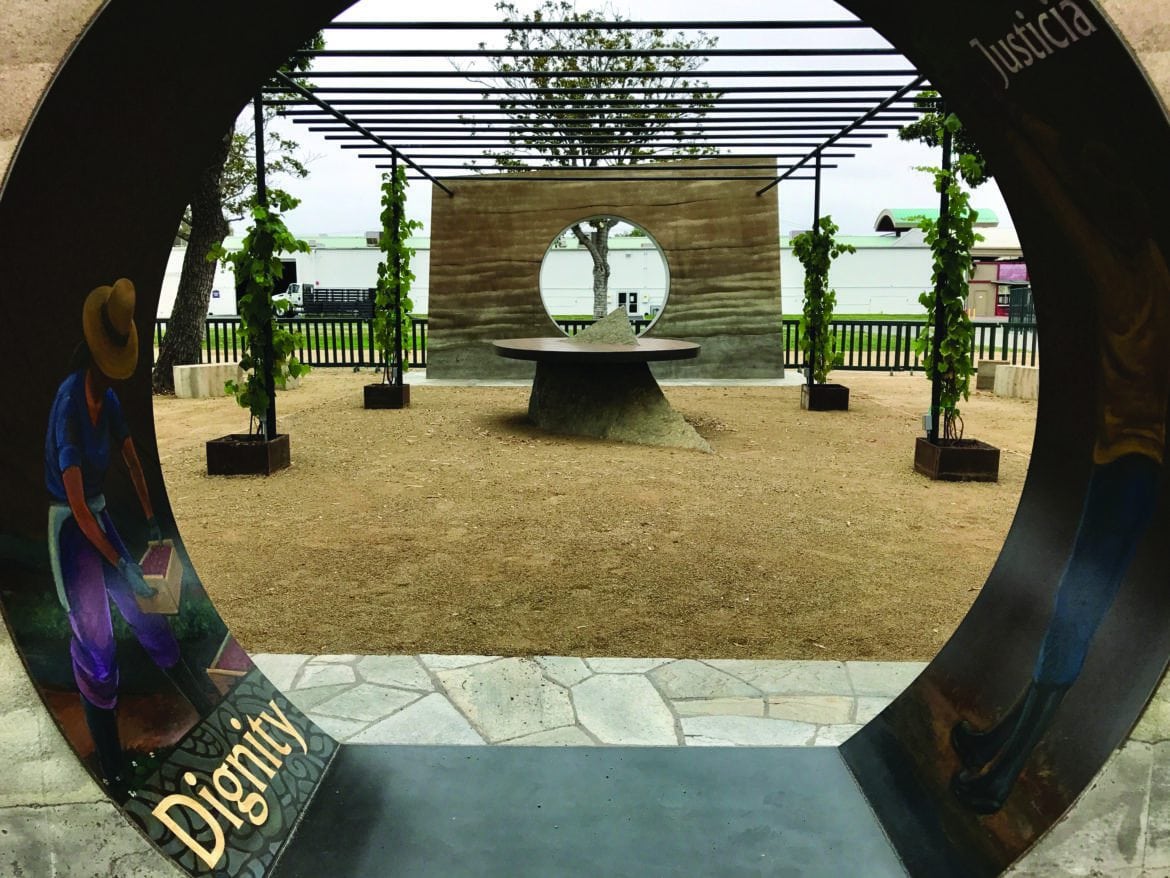 As you stand outside the large rammed-earth entrance of the Table of Dignity, your breath begins to calm. The arch invites you in, surrounds you with the colorful murals depicting a friend or neighbor picking and gathering her crop, and celebrates the “Dignity” and “Justicia” in an honest and long days work. Once inside, you are invited to sit down around the large community table situated amidst a zen-like stretch of decomposed granite. Under the pergola that will one day be covered in the newly-planted grapevines, you can almost forget you are sitting in the middle of the 150-acre Orange County Fair.

What is further striking is the juxtaposition of the calm feeling the memorial imparts with the harshness of the history it represents. Standing in stark contrast to the concepts of justice and dignity is the history of our ethnically diverse farm workers in Orange County, and the tremendous prejudice and violence they endured. 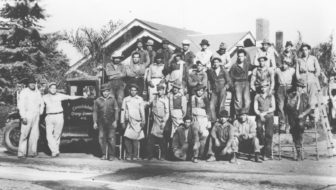 A little known pocket of Orange County’s history involves the 1936 Citrus Strike. Orange County was not immune to the labor strife of the 1930s, and by June of 1936 the thousands of citrus pickers — largely Mexican nationals — organized to strike against the low pay and oppressive working conditions. Their wives and families banded together to help each other and to prevent growers from entering their “colonias” to hire scabs.

The growers responded by enlisting the sheriff, who deputized the growers and local businessmen. By July, riots began breaking out. The growers used tear gas and axes to break up meetings of strikers, and targeted businesses willing to sell goods to strikers’ families.   After a deputy was attacked, hundreds of strikers were arrested.   At one point, the sheriff ordered a standing “shoot to kill” order to the anti-strike guards. After a month of violence and conflict, an agreement was reached and the strike ended.

This incident is just one example of the historical struggles our agricultural workers faced in the field and beyond. The Board of Directors of the Orange County Fair decided to highlight the sacrifice of these men and women by commissioning a public art installation that pays tribute to the blood, sweat and tears shed by the often faceless, nameless agricultural farm worker.

This Friday, please join us as we officially unveil the Table of Dignity on your Orange County Fairgrounds. If you cannot make it, consider bringing your family to experience this living and breathing tribute to those that stand for fairness and dignity in our community.

The official unveiling is Friday, August 25, 2017 at 10:00 a.m. at the Centennial Farm. Admission is free, but please RSVP at www.ocfair.com under the “Events” tab. The Orange County Fairgrounds hosts over 100,000 schoolchildren each year at its educational centers including the Centennial Farm, Heroes Hall and the Table of Dignity. It is open Monday – Friday 1-4 p.m. and Saturday and Sunday from 9 a.m. to 4:00 p.m.

Ashleigh Aitken is a board member for the Orange County Fair and Events Center.