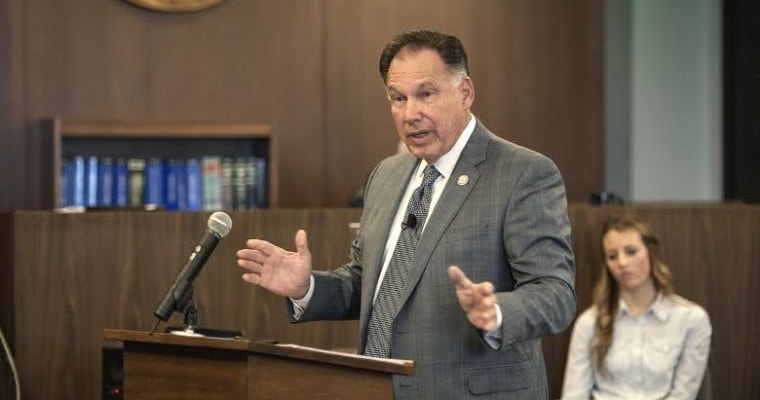 Orange County District Attorney Tony Rackauckas during his opening statement in the trial of Fullerton police officers involved in the beating death of Kelly Thomas. (Pool photo by the Orange County Register)

Orange County District Attorney officials say they took quick action to correct issues raised in a grand jury investigation that found sex between supervisors and subordinates and sexual harassment may contribute to a hostile work environment within the DA’s investigations bureau.

In its June report, the county grand jury said there was a widespread perception within the investigations bureau that promotions and favorable treatment went to employees who were part of a specific  social circle and as a result of sexual relationships with superiors.

In his official response to the report, District Attorney Tony Rackauckas began by describing the Bureau of Investigation and the many awards received by members of its 220-person staff.

“Against this backdrop of excellence, the OCDA recognizes that some decisions made in the Bureau impacted morale and compromised the professionalism and integrity of the Bureau and the OCDA,” states the DA’s response, which was dated Monday and sent to reporters Tuesday evening.

“When these issues came to light, the OCDA took swift and decisive actions to ensure these issues were corrected before the issuance of this report. Change in leadership, outreach to employees, conducting human resources investigations, and developing policies that go further than one County policy.

“The OCDA believes these changes have helped to restore morale and confidence in the future direction of the Bureau.”

Employees told the grand jury about multiple instances of sexual images sent via text and email; inappropriate sexual and racist jokes; unwelcome sexual behavior and touching between management and subordinates and sexually explicit comments made by coworkers.

According to the report, employees said they didn’t report harassment to the DA’s human resources officials because they believed they would face retaliation, thought the complaint would be reported to their harassers or that nothing would be done.

The Grand Jury said in its report that when asked by grand jurors about the complaints, OCDA management often passed them off “as either false or inaccurate with comments that likened the actors to kids in a candy story when they gained positions of power over female subordinates or the behavior was passed off as just chasing skirts.”

“In interviews with management in the OCDA office there often did not seem to be recognition of the severity of the alleged behavior but rather a discounting and dismissive ‘boys-will-be-boys’ mentality,” the report reads.

Rackauckas said his managers took swift action to address the issues raised in the report.

“To address the stated perceived issues within the Bureau, the [DA’s office] initiated an independent investigation to determine the validity of this perception. Personnel actions have been taken including changes in Bureau leadership,” the DA’s response states.

“The OCDA is committed to determine if any policy violations have occurred and the appropriate actions will be taken. In addition, the Bureau is proactively developing several new policies that prohibit this type of conduct.”

Among other allegations about the DA’s office, Hunter wrote in his legal claim there was no investigation when a supervisor in the DA’s office got his administrative assistant pregnant.

DA officials responded to Hunter’s overall legal claim by saying it was filled with false allegations in an attempt to get money from taxpayers.

As for intimate relationships between supervisors and subordinates, DA officials wrote in their response to the grand jury: “It has always been the policy and practice of the OCDA to prohibit such a relationship.

“The Bureau [of Investigations] is developing a stronger policy against nepotism and conflicting relationships.”