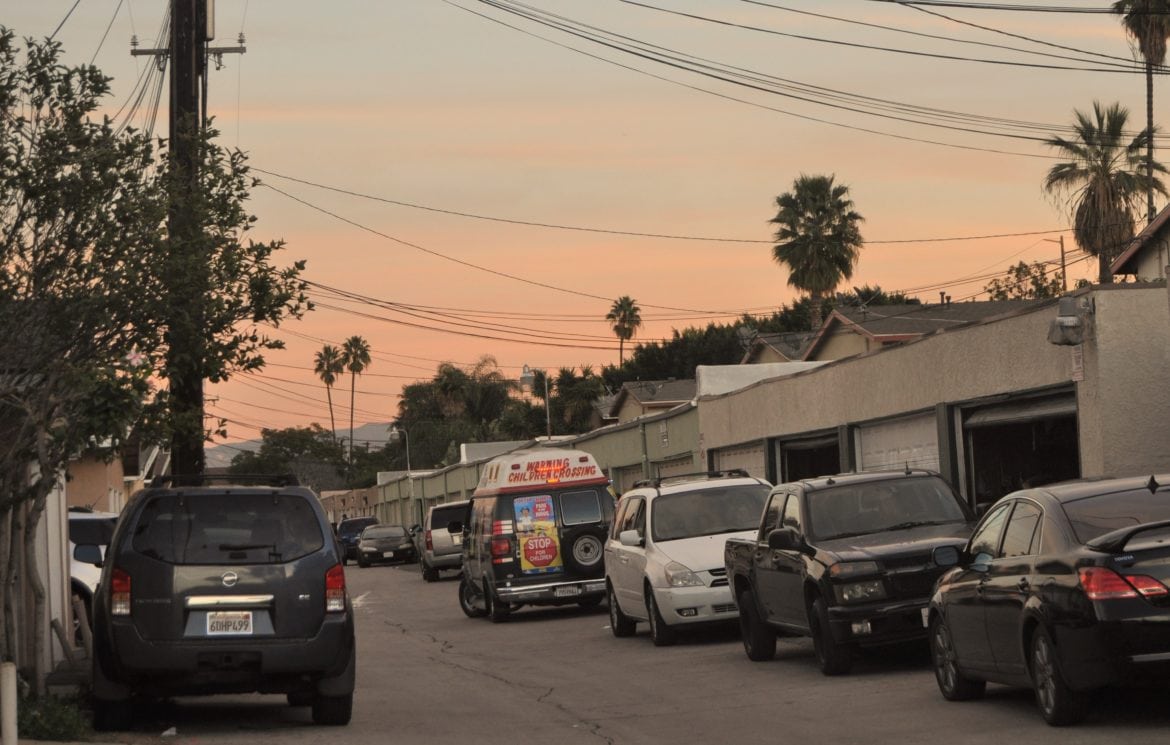 Parking along the alley is illegal, but apartment residents still park bumper-to-bumper. Residents say police rarely ticket in the alleys because of the city's difficult parking situation.

Fullerton apartment tenants in the southwest section of the city had some of their parking woes lifted after nearly 10 months of voicing concerns to the City Council.

“Right now we are truly parking deficient,” resident Jesse Ward said during the Aug. 15 council meeting. “We have nowhere else to park. We are landlocked so to speak.”

Fullerton has a 93-year-old ban on overnight parking on all public streets. Throughout the years the timeframe has changed, but today it bans parking from 2 a.m. to 5 a.m. The ordinance has pitted homeowners against apartment renters in battles at the Transportation and Circulation Committee (TCC) and City Council meetings.

Since 1979, the city has lifted the overnight street parking ban in a block-by-block approach in neighborhoods that are mostly on the south side of the city.

In the last 10 months, the issue has been discussed during nearly every public comment section of the regular City Council meetings as more tenants have turned out to voice their concerns.

Fullerton isn’t the only city in north Orange County to face similar parking hardships. The issues have perplexed municipalities like La Habra, Stanton, Anaheim and Orange.

The latest council action affected apartment residents and homeowners in the Porter and Citrus Avenue neighborhoods, which are roughly bounded by Hill and Orangethorpe Avenues.

The unanimous council vote added a total of 13 overnight street parking spaces on Hill Avenue, north of the Porter neighborhood and four in the Citrus Avenue area, for a total of 17.

The 17 spaces on Hill and Citrus Avenues are not enough, said Donna Anderson, who owns three apartment buildings on Porter Avenue. Anderson estimated tenants are going to need about 100 more spaces. All of the parking garages in her apartment complexes are full, she said in a Thursday morning telephone interview.

According to Anderson, and others who spoke at the Aug. 15 meeting, many apartment tenants have to get up before 2 a.m. and drive their cars around to find somewhere to park that won’t result in a ticket.

Emily Ward, who is married to Jesse Ward, echoed the need for far more parking in a Thursday afternoon interview.

“The city has acted like they’ve … bent over backwards to help us, but it’s still woefully inadequate,” she said.

Emily Ward said the argument between homeowners and renters has become racially charged over the months during TCC and council meetings.

“The homeowners are predominantly white, while they attack tenants who are predominately Hispanic,” she told the City Council. “Even more sadly, their attacks have played on racial stereotypes. Not tonight, but if you look at past meetings, this is absolutely true.”

“They’ve actually called us (renters) ‘criminals’ who make them feel unsafe. One lady said after a (TCC) meeting that I was not included in that (statement). Is there something different about me?” asked Emily Ward, who is white.

Additionally, the council directed City Manager Ken Domer to begin working with the Fullerton School District on an agreement to provide an additional 31 overnight parking spots at Nicolas Junior High School’s sports field parking lot, although no expected time frame was given.

“I know that’s not all you want tonight, but I do think these are real things we can do to be part of the solution. And let’s face it, we all have to be part of the solution, and it is always a very difficult balancing act to balance everyone’s interests here,” said Councilwoman Jennifer Fitzgerald, who made the motion to exempt the two areas and direct Domer to get an agreement with the school district.

“Without contorting our current system too much, I think it’s a couple very large strides in the right direction,” Mayor Bruce Whitaker said.

Liz Savage and another homeowner said the tenants’ parking ticket claims are exaggerated and the TCC has heard the tenants’ stories “and I mean stories as in ‘stories.’ Especially with the ticket numbers that are being overinflated out there,” Savage said.

Added homeowner Jeff Moeller, “We all have heard the lies and exaggerated stories of … the numbers of (parking) tickets given by a few tenants. A teacher stated that she has had to pay hundreds of dollars in fines.”

“He called me a liar — publicly — in front of everyone, to say that I hadn’t paid hundreds of dollars in tickets … I have paid $200 in tickets,” she said in a Thursday interview. She is a high school English literature teacher.

Anderson doesn’t understand the homeowners’ apprehension about the tenants parking in front of their houses overnight.

“What’s the big deal? What is happening to our society? They (homeowners) just turn their heads. They don’t care,” Anderson said, adding that the council gives leverage to homeowners.

“What’s holding them (the council) back? Because the homeowners don’t want them parking on public streets,” Anderson said.

She said the council may not understand the plight of the tenants and wants council members to experience what the tenants go through. “I’d love if they would do it for a week.”

Savage said it’s a problem that should be addressed by landlords.

“It’s a private party issue. It’s their business, they need to take care of it and not infringe on the neighborhoods around them,” Savage said.

Tenants used to park behind the former Fresh and Easy on Euclid Street and Orangethorpe Avenue until Thanksgiving Day last year, when the property owner towed at least 20 cars, Emily Ward said.

Meanwhile, the TCC was supposed to present citywide parking recommendations to the Planning Commission Aug. 23 from a study that began in April, but it was postponed, according to the city website. No explanation or new date is given for the postponement.