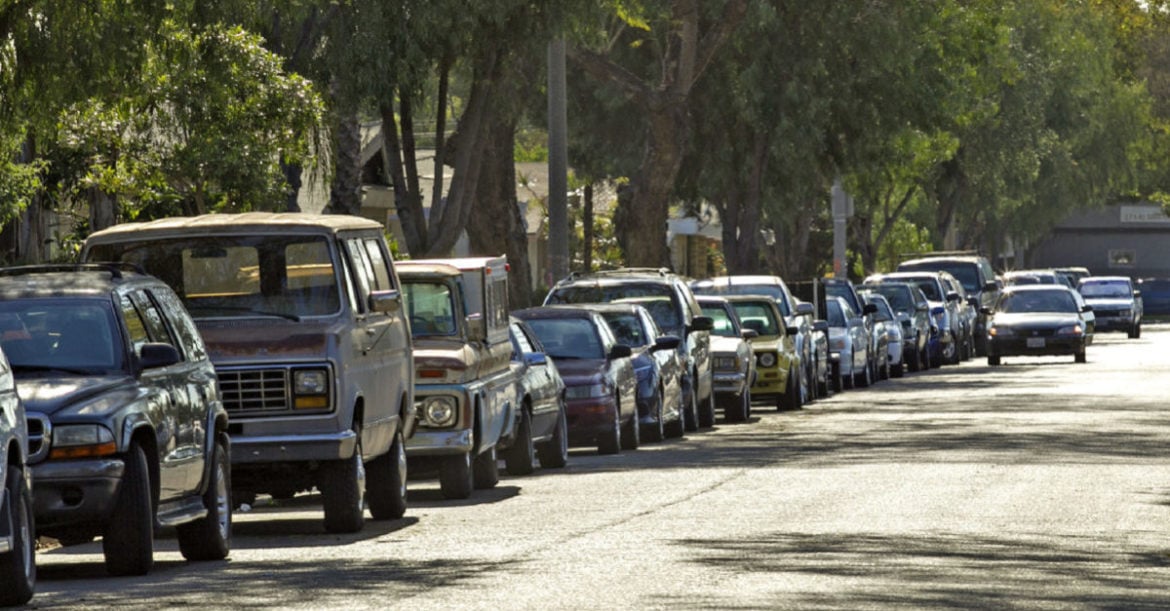 Vehicles line up on Juno Avenue in Anaheim on Monday, April 10. 2017

Residents in an increasingly dense Orange County are feeling the growing pains of scarce parking.

“Every home or condo or apartment is generating more vehicles today than it was ten or twenty years ago,” said Carlo Tomaino, assistant to the city manager in Lake Forest.

In the county’s urban core where apartments are packed near single-family homes, curbs are often crowded bumper-to-bumper with cars.

Homeowners and renters alike complain about long patrols after work for an empty space, only to face the other side effects of too little street parking: litter, spillover parking from nearby schools and events, strangers parking mobile homes and work trucks on public streets, and even dealers who use residential street curbs as a free display for used cars. 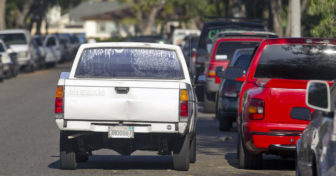 A pickup truck looks for a parking spot on Juno Avenue in Anaheim on Monday, April 10.

“Would you like to go home at night and park three streets away and walk to your house?” Ray Abrahamson, an Anaheim homeowner, asked the City Council. “We can’t leave our house to go grocery shopping and come back with a parking space.”

Most cities have tried to solve the problem by issuing parking permits to residents, a move that helped some streets, but shifted the parking shortage to others. Other cities, like Fullerton, created a patchwork of apartment neighborhoods where overnight street parking is allowed, but the streets still are jammed.

In Anaheim’s Juno Avenue neighborhood, one mile west of Disneyland, nearly all nearby single-family home streets have converted to permit-only parking, squeezing apartment dwellers into an ever-shrinking space. 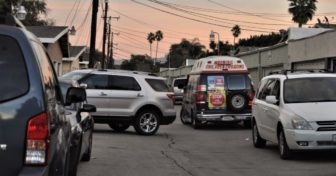 An alley behind Juno Avenue in Southwest Anaheim, where apartment dwellers illegally park because of lack of parking in the neighborhood.

Many resort to illegally parking in fire lanes in narrow alleys and eat the cost of parking tickets, while permitted streets one block over sit half-empty.

Leah McCallaugh, a resident of Fullerton who lives in an apartment, waved a handful of parking tickets at a city council meeting in October, pleading tearfully for officials to fix the problems an overnight parking ban caused her and other apartment residents with limited parking.

“All these are tickets from where I live. I work hard. I’m a taxpayer. I have every right to park on the streets I live on,” McCallaugh told the council.

The Fullerton city council has discussed temporarily suspending its ban on overnight parking.

Much of the apartment and multifamily housing stock countywide was built before the 1970s, when households had fewer working adults. Many provide just one or two dedicated parking spots. The result is apartment residents tend to rely on street parking more than those living in single-family homes.

A study by the city of Lake Forest found most of its overflow parking problems occurred at the southern tip of the city, especially in three census tracts where there tend to be more people per household and the housing stock was built in the 1960s.

“A lot of times, it seems like people in neighborhoods with apartments tend to get parking tickets more frequently than residential neighborhoods,” said Nicholas Dunlap, a board member for the Apartment Association of Orange County.

An opinion published last April by former state Attorney General Kamala Harris concludes residential permit parking programs can’t discriminate against residents based on the type of dwelling they live in.

Dunlap believes that opinion calls into question the legality of some city parking policies.

Part of the solution may lie in housing.

A shortage of affordable housing has compounded the parking problem, with more adult millenials living with their parents and families doubling up into apartments.

A worker needs to make $25 an hour to afford a one-bedroom apartment in Orange County, according to the 2016 OC Community Indicators Report, but two-thirds of county jobs don’t pay that much.

A number of cities now are reviewing their permit parking policies in search of solutions.

In Anaheim, after residents raised concerns about equity in the permit parking program, the City Council discussed changing the policy, although nothing specific has been proposed yet.

Other cities are approaching the problem by creating additional public parking.

In Lake Forest, where officials are considering an overhaul to their parking policies, the city has discussed eliminating undeveloped green space near the Viejo West Condominiums to create more parking and is exploring a deal to create overnight permit parking at the Lake Forest Golf Course.

Tomaino said part of the solution lies in getting homeowners’ associations and property managers to enforce rules prohibiting residents from using their garages for storage and living space and instead use them for parking.

Stanton officials recently proposed turning a vacant lot at Cerritos and Flower Avenues into a public lot to help deal with spillover parking. They also are eliminating red fire lanes where they aren’t necessary to create room for street parking.

“You pack people in and give them no options – the city is creating tensions that shouldn’t be there,” Rizzie said.