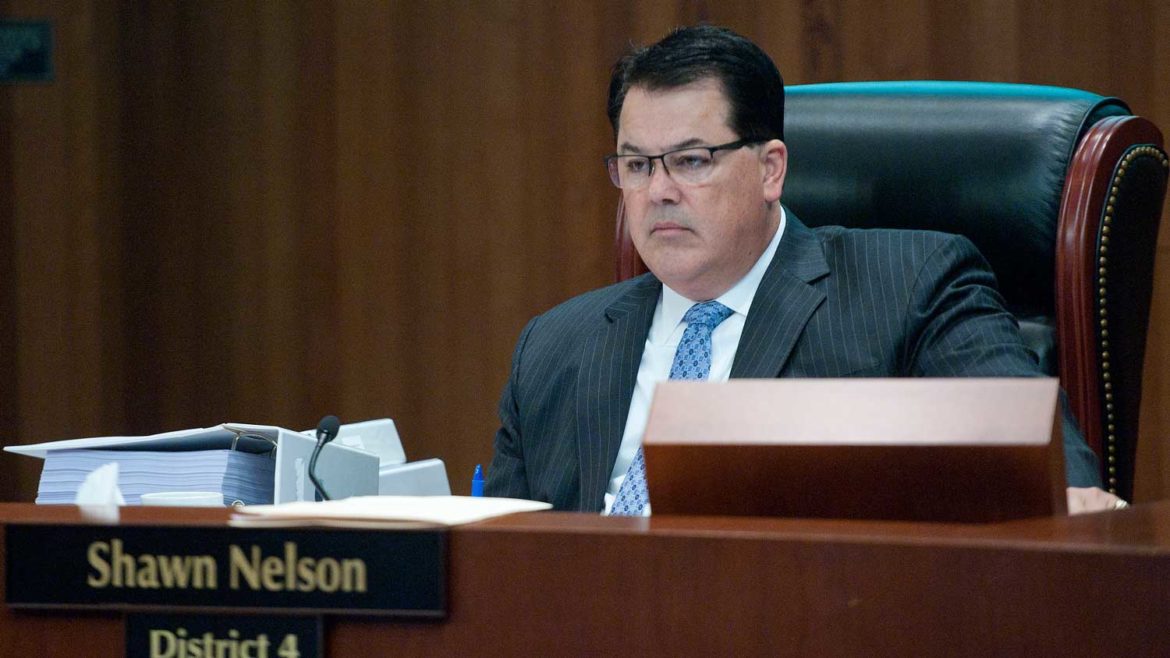 Orange County Supervisor Shawn Nelson received more than $700 worth of wine and cigars from two contractors after he voted to award them county contracts, and his handling of the “gifts” may be a creative way around the county’s gift ban, but a possible violation of state law.

Among the items Nelson recently reported was $539 worth of wine from Potomac Partners, a Washington D.C.-based lobbying firm that won a county contract last year.

The county competitive bidding process ranked Potomac last out of four firms vying to be the county’s federal government lobbyists.

But during the Board of Supervisors’ public discussion in October, Nelson said Potomac was the strongest choice, and he made the motion and was a deciding vote in the 3-2 decision to pick the firm for a $1.3 million county contract.

During the Christmas holidays, a few weeks after the contract’s final approval in November, Nelson received a thank-you gift of wine from the contractor, addressed to Nelson at his county office, according to his campaign treasurer.

Nelson reimbursed Potomac for the wine with $539 in campaign funds sometime in the first half of 2017, according to the disclosure.

Nelson also reimbursed another county contractor, Kevin D. McCarthy, a vice president of Majestic Realty Co., with $169 in campaign funds “for Gift of Cigars,” according to the same disclosure. The morning after Voice of OC asked Nelson’s campaign treasurer about the items, she filed an amendment that changed the wording to “No Gifts Allowed.”

On June 30, 2015, McCarthy and Potomac’s president and chief lobbyist under the county contract, Richard Alcalde, each donated $1,000 to Nelson’s “officeholder” campaign account. Nelson used that same account this year to reimburse them $708 for the wine and cigars.

Term limits bar Nelson from running for re-election, so the account he used to raise campaign funds to run for supervisor is now called an “officeholder” account. Nelson, who is a lawyer, is running for a Superior Court judgeship next year and has transferred part of his officeholder funds to his account for the judicial campaign.

The county’s gift ban ordinance makes it illegal for county supervisors to “accept any gift from any person whom he knows, or has reason to know, is doing business with the County.” Violations of this section are a misdemeanor.

Accepting such gifts “erodes public confidence in the impartiality of decisions made by those officials,” according to the county law. The ban was enacted in 1993 after supervisor, Don Roth, accepted thousands of dollars in gifts from county contractors he was making decisions about.

And state law bans the use of campaign funds for personal purposes, including gifts, according to its enforcement agency, the California Fair Political Practices Commission (FPPC).

Nelson said in a telephone interview the wine and cigars are at his county office and he plans to distribute them at an office event sometime in the future, possibly his going-away party.

Nelson said his approach is legal because campaign funds were used to repay the contractors for the items, and because the wine and cigars aren’t for his personal use, but rather for “officeholder” purposes.

He noted the county ban defines “gift” as having the same meaning as the state’s Political Reform Act: anything of value “that confers a personal benefit on the recipient,” without the recipient providing something “of equal or greater value” to the giver.

Nelson said compensation was provided for the wine and cigars’ value. “Receipt of full value in return eliminates any item from the gift category,” he said in a text message.

“Nobody anticipated that some guy that was doing business with the county could bring in an unsolicited gift, and then you just pay for it [with campaign funds the contractor contributed to] and it’s no longer a gift,” Grindle said.

She called for an update to the county law. “I think that the gift ban should be amended to prohibit the [reimbursement] of gifts they receive,” Grindle said.

Under state law, personal funds can be used to reimburse gifts, but campaign funds cannot, according to FPPC spokesman Jay Wierenga.

“It is illegal to use campaign funds for personal use. A gift, by definition, is a personal benefit, so generally speaking, one can not pay down the value of a gift with campaign funds,” said Wierenga, who was speaking generally about the law and not about Nelson.

California’s gift limit applies to all state and local elected officials, including county supervisors like Nelson. That state law bans public officials from receiving gifts worth over $470 within a 12-month period from any single individual or group. Officials can keep the gift if they reimburse the gift-giver for any value over $470, but cannot use campaign funds for it, Wierenga said.

Nelson said the wine and cigars are not gifts.

“No gifts are allowed. I don’t accept gifts…This is garden variety, the office [purchased] items to be used,” Nelson said.

“These items, just as reported, other than the word ‘gift,’ were handed over and [I] paid for them,” Nelson said. “My campaign just bought those items. I still have the items, they’ll be used by the campaign at an event, and that’s it.”

Asked why his campaign filing used the term “gift” to describe the wine and cigar reimbursements, if he doesn’t consider them gifts, Nelson said his treasurer, JenEve Slater, “should not have used that word.”

Asked if he’d be updating the disclosures, if the wine and cigars aren’t in fact gifts, he said of the filings: “I have no reason to believe they’re not accurate.”

Nelson’s treasurer, meanwhile, said the wine was a gift.

“He was sent a gift, and they’re not allowed to accept gifts,” Slater said. “He can’t accept gifts because it’s against the county law, so he paid for them using the campaign funds and will pass them out.”

Nelson’s campaign filing for the first half of 2017 describes the $169 payment to McCarthy, the real estate contractor, as “Payment for Gift of Cigars.” It doesn’t list the date the payment was made.

And it shows a $539 payment of campaign funds to Potomac for “Repayment for Holiday Wine Bottles Delivered to Office – No Gifts Allowed – To be Disbursed in future – No Bottle over $50.” The date of that 2017 payment was not provided either.

After Voice of OC spoke with Slater on July 31, she amended the filing to change the cigar payment description to “Repayment for Cigars Delivered to Office – No Gifts Allowed – To be disbursed in future.” The wine description stayed the same.

After learning of the wine and cigars in an interview with Voice of OC, Grindle reached out to the county official charged with investigating possible violations of the county gift ban: Denah Hoard, the executive director of the county’s still-unformed Campaign Finance and Ethics Commission.

Grindle said Hoard is looking into the matter.

In a phone interview, Hoard said she cannot confirm or deny any investigations, because the county’s ethics commission law requires investigations to be confidential.

Nelson had a leading role in writing that law, which was enacted through a ballot measure last June.

In contrast, the state ethics enforcement agency, the FPPC, makes complaints public five days after receiving them, and will publicly confirm whether it’s investigating or not.

Nelson and the other supervisors directly oversee Hoard, who is in charge of investigating ethics complaints against them. The supervisors’ employment contract with Hoard says she performs her duties “under the direction of the Board of Supervisors,” and the board can fire her at any time.

Hoard has “none of the due process rights of a regular, full-time [county] employee,” and serves as ethics director “at the sole pleasure” of the board, according to her contract.

Hoard said under the county law, the results of investigations are public once they’re concluded.

While declining to speak to the specifics of Nelson’s case, she noted that in general, the county gift ban defines “gift” to be the same as the definition in the state’s Political Reform Act and regulations issued by the FPPC.

“A gift is anything of value for which you have not provided equal or greater consideration to the donor,” according to the FPPC.

The ethics commission, which handles appeals of Hoard’s decisions regarding ethics violations, still hasn’t been created by supervisors more than a year after voters approved it. Nelson is the only supervisor out of five who has appointed someone to the commission.

Voice of OC asked county officials for the training material Nelson and others received about the gift ban. County officials declined to release it, saying it’s protected under attorney-client privilege because the training is provided by the County Counsel’s Office.

While they can legally withhold the trainings, “one wonders why they would choose to keep secret how county employees are trained to comply with an ordinance that is intended to avoid corruption,” said Terry Francke, a public records law expert with the nonprofit Californians Aware and Voice of OC’s open government and public records consultant.

As for why he didn’t return the wine to the county contractor, Nelson said it was easier to simply keep it.

“In the case of the wine, it’s heavy. It was just easier to pay him for the item and just keep it as part of the office,” Nelson said. “My guess was it was a heavy item to ship.”

Nelson has opened a campaign committee to run for judge next year, and has been rumored to also be seeking an appointment as a federal judge.

He finished his final re-election as supervisor in June 2014 with no campaign debts and $95,000 in his campaign account. He raised an additional $107,000 the following year, and transferred $60,000 to his Superior Court campaign in February 2016.