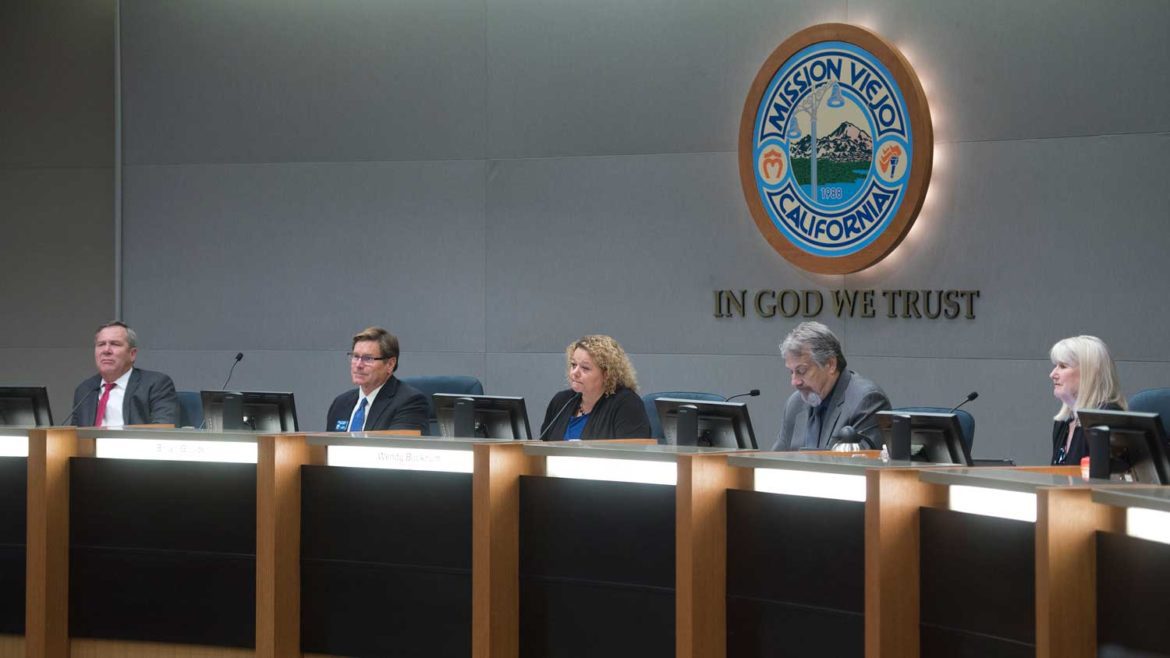 The Mission Viejo City Council unanimously voted to beef up its no-camping laws, despite warnings from lawyers and homeless activists who said the law could criminalize homelessness.

At the Sept. 12 council meeting, City Attorney Bill Curley said his office doesn’t enforce the ordinance on homeless people and the ordinance is part of a bigger city code cleanup effort that took place over the summer.

“My attorneys, we all know, no one is to be cited, runoff, taken away, have their goods taken … if someone is homeless, they (Sheriff’s deputies) actually know to call me before something is done,” Curley said.

The amended ordinance prohibits overnight sleeping in public places, replacing the old law that only addressed camping in recreation vehicles, trailers and automobiles on public property.

However, former Mayor Cathy Schlicht said it was more than just a code clean up.

Among those new additions is an “aggressive solicitation” ordinance which prohibits panhandling if a person is made to feel threatened or intimidated by a solicitor.

While there’s no consensus on the number of homeless in Mission Viejo, the 2017 Point in Time count estimates the city has 33 homeless people living there, said City Manager Dennis Wilberg, who expressed disappointment in the count.

“We were hoping we’d get a more detailed, accurate count,” Wilberg said during a Sept. 18 phone interview. “Because we spent a lot of time prior to the count, identifying areas … where we’ve seen evidence of homeless staying in the city … so we had seven different areas that we mapped out and provided to them.”

An attorney from the Santa Ana-based Public Law Center warned the council there’s no process within the ordinance for people to get their property back, should it be confiscated if they violate the no-camping law.

“The proposed ordinance does not provide any procedure if an individual was to leave their property behind. In fact, it’s silent on this issue,” Ugochi Anaebere-Nicholson said, adding the person would lose their property “without any due process they’re entitled to receive.”

Mission Viejo resident Staycie Sena, who also is a lawyer, said laws such as the no-camping ordinance do little more than perpetuate homelessness and often lead to criminal charges for failure to appear in court.

“I’m a criminal defense attorney and I’m here to tell you criminalizing homelessness is not the way to go …You may only see a $350 penalty,” Senna said. “First of all, they got to figure out how to get to court, so they’re probably going to miss their court date. Then the civil assessments are attached to that. By the time that’s done, they’re looking at $1000 or so.”

Sena added that she’s okay with homelessness in the city.

“I’m okay with homelessness in my backyard, but what I want more than anything else is kindness and courage and compassion. And I ask you to think about that.”

After her public comment time, Curley stepped in and said the city isn’t targeting the homeless population.

“Madam Mayor and City Council, there’s always the curse of assuming facts not in evidence,” Curley said. “We understand … how the process works. We do not cite true homeless.”

The city attorney said the ordinance is geared for people who come to town for events and decide to set up camp with their RVs in city parks. Curley also walked into the audience and gave critics of the ordinance a memo he wrote Sept. 5 that addressed many of the concerns raised.

“You roll in here for a three-day soccer tournament in your Winnebago and set up camp, yes we do (enforce the ordinance),” Curley said.

Former Mayor Robert Breton defended the city during public comments, calling the claims made by others “specious attacks” and “unfounded accusations.”

“We provide more grant money to more human service organizations than any other city in south Orange County. $60,000 to $75,000, annually,” Breton said. “Since 2014, the director of community development has overseen the addition of another 41 low income units and she is currently working on 264 additional units.”

Mayor Wendy Bucknam echoed Curley’s comments and said the no-camping ordinance is part of a larger ordnance cleanup effort that was done during the summer. Unlike the last City Council meeting when the ordinance amendments were first introduced, Bucknam was the only person on the council to speak on the issue.

She said the city is partnering with the county to help alleviate the homeless issue.

“There already is activity going on in partnership with the County. That’s happening,” Bucknam said, but didn’t offer more specifics.