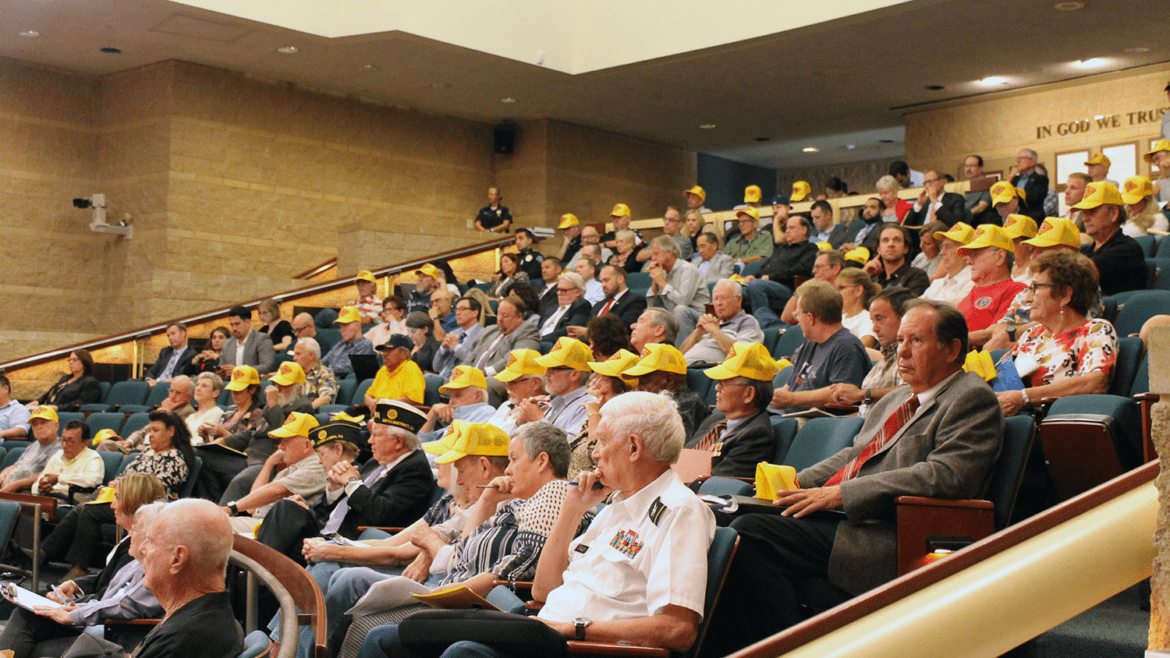 A crowd gathered in the Irvine city hall chambers Tuesday night, Sept. 26, 2017, to observe and comment on the Irvine veterans cemetery plans.

Orange County’s first veterans cemetery will be 125 acres from the beginning, despite earlier uncertainties, after the Irvine City Council voted 3-2 to transfer all of the land, along with the deed, to the California Department of Veterans Affairs following a land swap with a developer.

“Much inaccurate information was floating around,” Mayor Don Wagner said during Tuesday’s special meeting, referring to news reports. “I have always wanted — and want now — a 125-acre veterans cemetery. I am not and have not wavered in that commitment.”

The hastily-called special meeting came after FivePoint Holdings CEO Emile Haddad’s claim that City Manager Sean Joyce told him he only wanted to initially transfer 25 of the 125 acres to the state for cemetery development, while constructing revenue-generating buildings on the rest of the land, like a hotel and houses. Over decades, the rest of the land would be transferred as needed for the cemetery.

Even with barely 24 hours notice of the 4 p.m. meeting, more than 100 people showed up, many of them veterans wearing yellow caps in support of the cemetery, along with their service medals.

“Acre for acre swap, deed for deed … we would then immediately then transfer over to (CA Department of Veterans Affairs) CalVet,” Wagner said. “No hotels, no new houses. Calvet — it’s their property and they’re going to build a cemetery.”

Wagner, Mayor Pro Tem Lynn Schott and Councilman Jeff Lalloway said the claims by Haddad were nothing more than rumors.

“Our city manager has to negotiate deals all the time, as does our city attorney,” Lalloway said. “I was forced to clear up that lie … that was the ultimate in fake news.”

Schott chalked up the controversy to staff asking questions.

“It was right for our staff and City Attorney (Jeff Melching) to ask questions.”

However, Councilwoman Christina Shea said she saw evidence to the contrary.

“Probably three or four nights I didn’t sleep, because in fact I did get documents that show city staff … had been negotiating new terms … there was a lot of factual information in these articles,” Shea said.

“The fact of the matter is within the last three weeks, they have been negotiating outside the parameters,” Shea said. “That’s what was completely inappropriate and that’s why this brush-up happened.”

In June the city council voted to swap 125 acres from the former El Toro Marine Corp Air Station for a 125-acre site owned by FivePoint off the 5 and 405 freeway interchange. The freeway site now is used to grow strawberries and was once inside the edge of the base. FivePoint has pledged up to $10 million to help fund the first phase of construction. Veterans have sought a cemetery in Orange County for years. Currently, the closest veterans cemeteries are in Riverside and San Diego Counties.

Schott and Lalloway voted against the land swap agreement, and said the original site, which has hangars, barracks and other buildings on it, should have been kept for the cemetery. The two also voted in June against the initial move towards a land swap.

Additionally, Wagner included in his motion that he will have the sole authority to sign the swap agreement when the paperwork is ready for signatures.

Acknowledging concern that was echoed by some members of the public during more than an hour of public comment, Wagner said he would put the final agreement on the city’s website at least five days before he signs it.

“It’s more a ministerial act than anything else to get the documents signed so we’re not back here for two hours and we are … just doing this dance all over again,” he said.

Haddad said, in a statement provided by a company spokesman Tuesday night, “We are glad that the Mayor clarified and simplified matters. We stand behind our term sheet which we sent on June 5, and today’s vote allows us to move forward on that basis.”

Before Tuesday’s special meeting, there were high levels of concern expressed by Councilwoman Melissa Fox, Shea, Haddad and a state Veterans Affairs official.

“We got a call where they basically told us that they would like to only transfer 25 acres,” Haddad previously told The Voice of OC Sept 21. “Then they would keep the 100 acres … until the state is ready to build the balance of the cemetery.”

“This land belongs to the veterans, not the city, not for revenue,” Haddad said.

“Anything short of a 125 acre transfer to the state puts the entire project in jeopardy. Once the state takes possession of the land and construction begins, the land can only be used according to the (Southern California Veterans Cemetery) Master Plan. No additional use leases, etc. will be authorized.”

Furthermore, a cover letter on the implementation agreement from FivePoint’s attorneys states it was understood at the June 6 meeting — when the land swap was approved — that the 125 acres would be transferred to the state in its entirety.

“It has also become clear that the City could be contemplating using the cemetery site for market-rate commercial uses, and thus in our subsequent drafts we have clarified that the entire site must be entitled for a cemetery,” the letter reads.

The 4 p.m. Tuesday special meeting was scheduled after the city narrowly met the 24-hour notice deadline as required by the Ralph M. Brown Act. Wagner scheduled the meeting at approximately 3:30 p.m. Monday.

Although the item had no staff report with it last night and Fox said Monday night that she was told the council would get the implementation agreement when they got to the special meeting, over 300 pages of documents were uploaded sometime between Monday evening and Tuesday afternoon.

Among those 300 pages was FivePoint’s implementation agreement that the company sent over Monday night. It explicitly states the strawberry field land is to be used for the veterans cemetery and agricultural use during the interim. If the city were to develop something other than the cemetery, it’s restricted to cemetery-related developments like a crematorium, flower stalls and a retail shop that sells veterans merchandise or historical items.