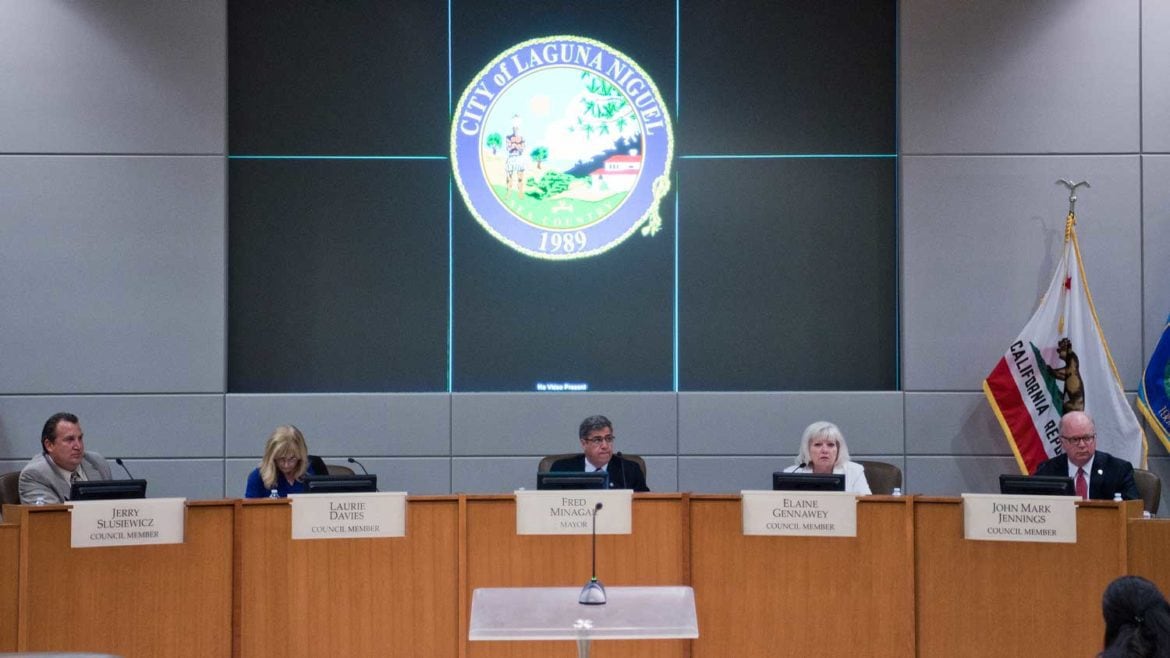 Despite a $410,000 overage on a tree trimming contract and an additional $2 million increase in maintenance contracts in recent months, Laguna Niguel City Council members are resisting calls for an audit of vendor contracts, instead opting for an operational audit of their procurement procedures.

That move is prompting concerns.

“We’re talking about contract management. We know that we’ve gone over contracts. I think it’s a big problem for us to do that,” City Councilman Jerry Slusiewicz said. “Let’s follow the money. If we do this audit, we’ll figure out what those contracts are that had the overspending.”

Slusiewicz has been calling for an expanded contract audit for months and proposed hiring of another financial firm to audit 200 contracts at the Oct. 3 meeting, but it didn’t make it to a vote — instead, Slusiewicz’ motion died on the floor.

Ultimately, tensions on the city council over the issue led to Slusiewicz resigning as mayor in August.

Slusiewicz earlier called for a District Attorney investigation into the tree contract overrun before his resignation, but didn’t gain any support for that action from his council colleagues. After he brought the tree trimming contract to light, a former city manager accused him of bullying, which ultimately led to his resignation.

Meanwhile, Councilman John Mark Jennings said the city is on the right path.

“I think we’re having a multi-tiered, comprehensive review happening. All of which is not only directed to the city (staff), but to the experts we’ve put on our committees to advise us about what the appropriate next steps are,” Jennings said.

When presented with $2.1 million increases in maintenance contracts last month, the council directed the Investment Banking and Audit Committee to begin reviewing all 674 contracts.

Furthermore, a contract audit by the Santa Ana-based Pun Group accounting firm released Sept. 5 uncovered a $410,000 overage on a tree trimming contract. After his presentation at that meeting, the Managing Partner of the firm, Ken Pun, recommended the city expand the contract audit after he found issues with eight of the 21 contracts they looked at.

The rest of the council acknowledged there had been problems keeping track of contracts, but expressed their confidence in city staff and the banking committee to handle the issue during an earlier purchasing status update item at the meeting.

“I know when we talked today during our agenda review, I was questioning how many contracts have been looked at … 80 or 90 percent of them have been looked at,” Mayor Pro Tem Elaine Gennawey said, adding that vendors should bid for the actual scope of work to eliminate additions to the contracts.

Most of last month’s $2.1 million increase in maintenance contracts stemmed from additional work by contractors.

“We’re going in there and buying small quantities when we should buy large and get a discount,” Gennawey said. “I think this has been a lot of work that needed to be done and I know it continues.”

“We have the greatest talents of Wall Street … in our city (on the committee),” Minagar said. “We have a lot of watchdogs in place.”

During a recent public presentation on the purchasing status update, Interim City Manager and Finance Director Stephen Erlandson said all city staff had two training sessions on purchasing policies. He added the city has developed a form to track contracts and spending on a department level and contracts will now coincide with the fiscal year.

At a Sept. 5 meeting, the council authorized staff to formulate a request for proposal for an operational audit. The proposal went out to bid Oct. 3 and proposals are due by Oct. 30.

The auditing firm hired will look at the city’s purchasing and contract policies and practices. The auditor will also examine any inefficiencies and lack of internal controls they may find and recommend solutions to the council.

Furthermore, Erlandson has previously said the city uses a carbon copy purchase system and is in dire need of financial software to replace the aged process that’s in use.

Now the software “will bring us into the 21st century. It will enhance controls in ways we should’ve had in the past few years,” Erlandson said.

Additionally, Erlandson said there hasn’t been any problems in the contract reviews so far. “Staff emphasizes that there were not unaccounted for or missing funds. There are no vendors claiming that they’re owed funds beyond the amount budgeted.”

Minagar said the city is taking strides in the right direction.

“As long as we are improving purchasing accountability, which is number one. Number two, we are building public confidence. And number three, as I’ve said, we’re enhancing the transparency.”

However, Slusiewicz warned that contracts and budgets are entirely different.

Meanwhile, the banking committee will meet Oct. 18 to discuss how to best approach the contract reviews and the council will vote on a resolution to expand the committee’s duties at one of their November meetings.

Correction: An earlier version of this story incorrectly stated the Investment Banking and Audit Committee would meet Oct. 8. We regret the error.