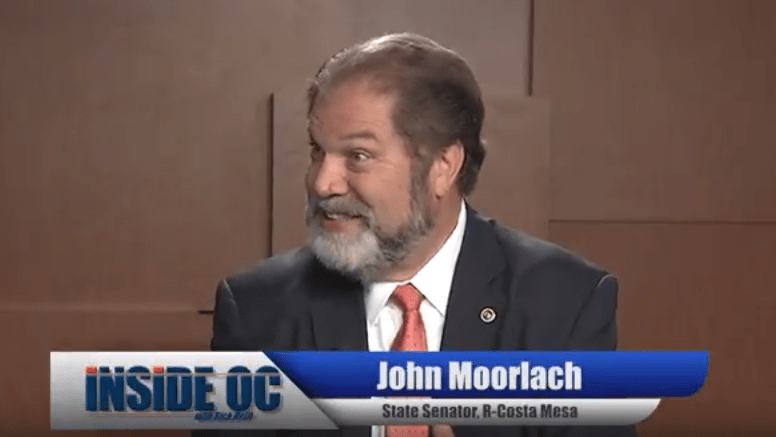 “It was fun to have a front-row seat,” State Senator John Moorlach says of the recently concluded session of the California legislature.

He’s not being complimentary.

Lawmakers passed hundreds of bills dealing with everything from road repairs and affordable housing to pollution controls and declaring California a sanctuary state.

But Moorlach, a former Orange County supervisor and now a member of the Republican minority in Sacramento, says the Democratic super-majority was obsessed with “bashing Trump” instead of finding constructive ways to work with the new presidential administration.

He said that was especially true on immigration – “the big issue.”

“The federal government has to find an appropriate solution to making it easier for those who are here to become citizens,” Moorlach said on the “Inside with Rick Reiff” public affairs program.

“We should be putting together a blue ribbon committee. We should be working with D.C. and saying, ‘California has the following solutions.’ We didn’t do that. (Senate President Pro Tem) Kevin De Leon never put together a team.”

Moorlach said California could assemble a bipartisan team of “incredible people” who could work with Washington on thorny immigration questions: “How do we make the transition? How do we be fair? How do we exercise the right amount of grace? Solutions are there … Let’s not just poke a stick in the eye of the president.”

While suggesting a path to citizenship for the undocumented, Moorlach, a native of Holland, also expressed reservations:

Moorlach also discussed what has become his catchphrase in Sacramento – “Who’s your daddy?” – implying that Democrats take too many actions at the behest of public employee unions.

Moorlach said he thinks pressing that assertion has made some lawmakers more thoughtful about the bills they introduce and even stopped some legislation.

He noted that a bingo card drawn up by Democrats on the final night of the session included a square that read, “Moorlach says, ‘Who’s your daddy?’”

“So I know I’m having an impact,” he chuckled.

In a response to Moorlach that was read on the program, Bruce Blanning, executive director of Professional Engineers in California Government, portrayed Moorlach as an obstructionist who opposed the gas tax to fix roads and other key measures:

Moorlach also discussed efforts to address Orange County’s growing homeless problem. Moorlach is advocating for conversion of the state-run Fairview Developmental Center for the severely disabled in Costa Mesa, slated for closing by the end of 2021, into a facility that could house, evaluate, treat and assist the homeless:

“Let’s get these people back on their feet. That’s what they want to do.”

Asked where opposition to the idea might come from, Moorlach said, “You’ll probably see my neighbors go crazy. Because I live in Costa Mesa. I could throw a rock at that facility.”

The interview aired recently on PBS SoCal, KDOC and Cox. It can be viewed here.