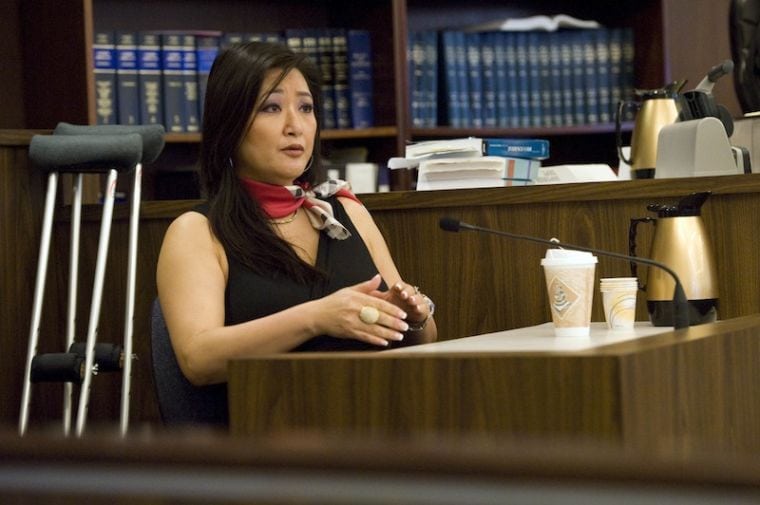 An internal monitor chosen by Orange County District Attorney Tony Rackauckas says the DA should remove the “chief of staff” job title from his longtime aide and former campaign manager, Susan Kang Schroeder, citing confusion and allegations of favoritism because her actual job duties are focused on public relations and stopping human trafficking.

“The title of ‘Chief of Staff’ implies power, and given that this power is not given to the [chief assistant district attorney], nor to any of the [senior assistant district attorneys] who are in charge of the various [District Attorney] divisions and units, many of whom presumably need the same sort of public support for their own units, it creates mass confusion among the rank and file [District Attorney] prosecutors and the public, an unclear hierarchy within the [DA’s Office], and allegations—whether well-founded or not—of favoritism,” according to a late August report  written by Stephen Larson, a former federal judge Rackauckas hired as an independent monitor.

Larson recommended the DA “eliminate the Chief of Staff position, create a new Government, Public Affairs, and Community Relations Division and appoint Ms. Schroeder as the Director of this new Division.”

“This position is a good fit for all of the various roles that Ms. Schroeder plays within the [DA’s Office] and eliminates the confusion and unnecessary strife that has been caused by the current reporting structure,” Larson continued.

“In this role, Ms. Schroeder would report to Mr. Rackauckas directly, as does the Director of Administrative Services and the Chief of the Bureau of Investigation. However, if Ms. Schroeder is to remain the head of the Human Trafficking Unit, she should report to the Senior [Assistant District Attorney] who heads the General Felonies/Economic Crimes division, [Joseph] D’Agostino.”

Aside from Schroeder’s position, Larson found the DA has implemented almost all of the other reforms recommended in January 2016 by a panel of experts Rackauckas hired to examine his office’s handling of jailhouse informants.

Michelle Van Der Linden, a spokeswoman for Rackauckas, said last week the DA fully supports his chief of staff and there’s been no change in her job title, role or reporting structure.

Schroeder has been mentioned as a possible successor to Rackauckas when he retires as district attorney.

Van Der Linden said the monitor’s report confirms the DA’s office “has been vigorously working with law enforcement and have revised [District Attorney] policies and procedures regarding the use of jailhouse informants.”

“As for any other issue, the District Attorney has full confidence in his staff, including his Chief of Staff.”

Van Der Linden declined to say if the DA agrees or disagrees with Larson’s findings and recommendations about Schroeder’s position, and why.

Larson’s recommendation about Schroeder, in a report dated Aug. 28 and released to Voice of OC Sept. 22, agrees with the unanimous recommendation a year and a half earlier by the expert panel Rackauckas picked, known as the Informant Policies and Practices Evaluation Committee, or IPPEC.

The DA formed the expert panel in the wake of a scandal surrounding alleged misuse of jailhouse informants and non-disclosure of evidence that has led to the overturning of at least six convictions for murder and other serious crimes in Orange County.

The IPPEC panel concluded the DA’s office suffered from “a failure of leadership” and called for a state or federal investigation into the informant scandal.

Rackauckas’ office “functions as a ship without a rudder,” the panel wrote in its January 2016 report, adding that the leadership failure “appears to have contributed to the jailhouse informant controversy.”

Rackauckas and his staff largely greeted the report with acceptance, agreeing to most recommendations or noting improvements were under way.

But Rackauckas made clear from the get-go he would not implement the panel’s recommendation that he eliminate Schroeder’s “chief of staff” title and instead create a position for “assistant district attorney for media relations.”

“With one exception, every member of the [DA’s] Office who was interviewed expressed what could only be described as an extreme level of concern regarding the toxic and combative relationship between the [DA’s] Office and the press,” the panel wrote.

At the January 2016 press conference where he released the panel’s report, Rackauckas said he had no intention of following the recommendation.

“The chief of staff position is very valuable…she does things for the district attorney’s office that are not strictly related to media relations,” Rackauckas told reporters.

A year later, in his August report, Larson found Rackauckas and his staff have implemented the vast majority of the panel’s recommendations, and significant improvements have been made in training prosecutors and the handling of informants.

“We believe the training program at [the DA’s Office] has been completely revamped, starting even before [the Scott Dekraai mass murder case that brought to light the informant controversy], in a way that will benefit OCDA prosecutors for years to come,” Larson wrote.

But Larson said the DA should still remove the “chief of staff” title from Schroeder, and ensure she reports to the head of the felonies division if she continues to supervise the human trafficking unit.

All five experts on the DA’s informant practices panel “were in complete agreement” that Rackauckas should eliminate Schroeder’s title as chief of staff and instead have her serve as assistant district attorney for media relations, Larson wrote in his recent report.

“Given the confusion that Ms. Schroeder’s title engenders within the [DA’s Office], we concur with the [panel’s] recommendation that the Chief of Staff position be eliminated.”

“She certainly has a role to fill within the [DA’s Office], but it should be one that fits within a standard, hierarchical reporting structure such that she is not seemingly elevated to a favored or more powerful position within the [DA’s Office] than the Chief [Assistant District Attorney] or even the Senior [Assistant District Attorneys] who run all of the [DA’s] various units.”

Rackauckas’ spokeswoman declined to say how much in taxpayer funds they have paid Larson’s firm for the independent monitor work.

“Regarding contact costs, the OCDA will remain within the contract limits,” Van Der Linden wrote, declining to elaborate further.

Larson’s contract has an annual limit of $150,000, with the first contract year running from August 2016 through August 2017. His firm nearly reached the annual maximum this March, with five months still remaining in the contract year.

“We ran out of funds basically in March to continue the work for the year,” Larson said in an interview last month.

Larson and his firm continued to perform work under the contract in the remaining months of the fiscal year, according to the DA’s office. It’s unclear how the payments for those months of work will be handled.

Before joining the DA’s office in 1999, Schroeder served as deputy communications director for the California Republican Party and served as a deputy city attorney for Anaheim, where she prosecuted misdemeanor cases. She was also married to Michael Schroeder, Rackauckas’ longtime campaign chairman and one of Orange County’s most influential Republican strategists.

The couple separated in late 2011 and divorced in 2014, though they both continued to serve as campaign chairman and campaign manager for Rackauckas’ 2014 re-election.

Susan Schroeder also served as Rackauckas’ campaignspokeswoman and campaign manager for other elections, including 2002 as well as 2014.

Rackauckas named her his chief of staff in 2010, despite having no experience prosecuting felony criminal cases. In that role, she created and developed the DA’s human trafficking unit, known as HEAT, that targets perpetrators who sexually exploit women and girls.

In 2015, Schroeder prosecuted her first felony case and lost, with the jury acquitting the defendant on one drug charge and deadlocking on the other. The judge turned down Schroeder’s request for a re-trial on the deadlocked charge.

“Based on all the evidence the Court heard in this case, and evaluated in the light most favorable to the [prosecutors],” Judge Patrick H. Donahue wrote, “the Court considers that no reasonable trier of fact could find guilt beyond a reasonable doubt.”