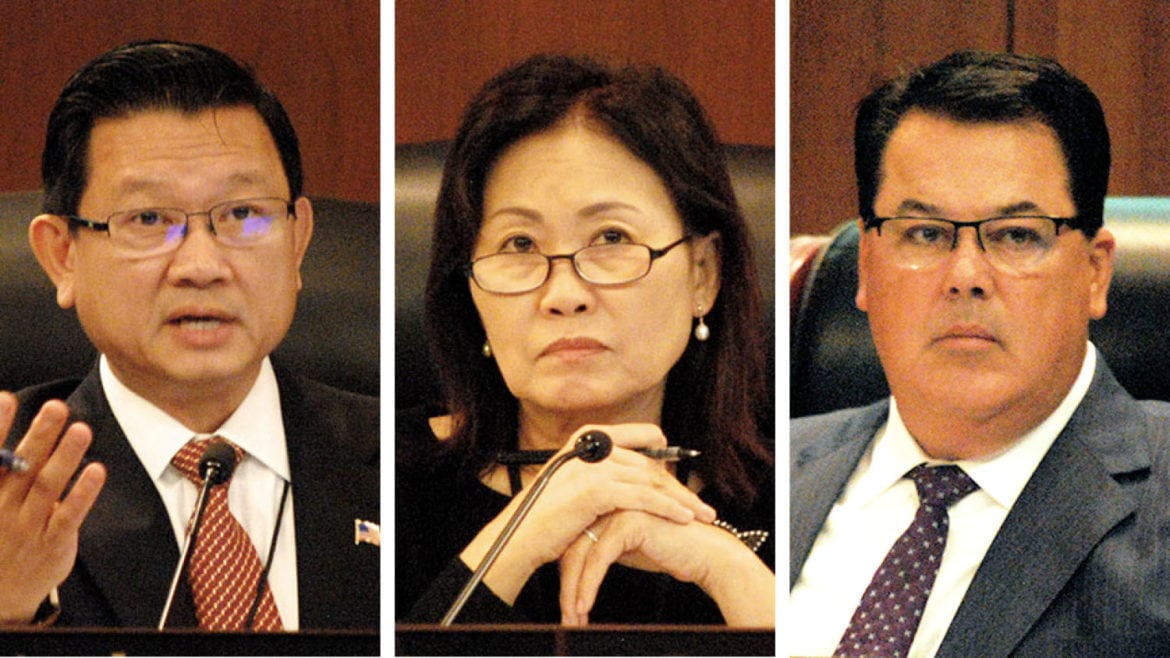 From left: County Supervisors Andrew Do, Michelle Steel, and Shawn Nelson, who voted to approve the Human Relations Commission changes at the Oct. 31, 2017 meeting.

Two Orange County supervisors, who have sought to end funding for the staff of a county commission tasked with reducing hate crimes and improving community relations with police, succeeded this week in granting county supervisors the ability to directly control the commission’s staff.

The changes, put forward by Supervisors Michelle Steel and Andrew Do, overhaul the governing rules for the county Human Relations Commission and give supervisors the power to fire the executive director at any time, for any reason, and pick the replacement.

Nelson voted Tuesday with Do and Steel to approve the changes, saying anyone who receives county money should answer to county supervisors.

“Whatever your issue is, [if] you want to be a county commission(sic), then you answer to whoever it is that sits in these seats,” Nelson said.

The commission was created by county supervisors in 1971, and works to foster better communication among diverse communities and fight hate crimes. In 1991, a nonprofit group was set up to supplement the county dollars with private funds.

Today, the commission’s staff are officially employees of the nonprofit group, OC Human Relations, and are funded by a mix of county and private dollars.

Do has publicly raised concerns about the Human Relations Commission’s work for more than a year. Last year, he opposed the commission’s use of the county logo on a statement it issued opposing hate directed at LGBTQ people in the aftermath of the June 2016 mass shooting of gay people at the Pulse nightclub in Orlando, Fla.

The report found hate incidents skyrocketed 67 percent in 2016, compared to the prior year, and news coverage of the increase has quoted advocates attributing much of it to anti-Muslim and anti-immigrant rhetoric by President Trump during last year’s election campaign.

The president tweeted his thanks to Shawn Steel in July, after he appeared on Fox News to defend the president.

Michelle Steel has been trying to get Hamel replaced on the Human Relations Commission with Clare Venegas, the former chief executive of the influential Republican group, the Lincoln Club of Orange County, according to Spitzer, who noted Hamel is a representative of his district.

“Supervisors are interjecting in the appointment process” of other districts, Spitzer said. Michelle Steel objected, saying it’s city representatives who pick that position.

In September, the month after the commission voted to release the hate crimes report, Michelle Steel and Do introduced their proposal to give supervisors direct authority to fire and hire the commission’s staff.

Do said the supervisors weren’t required to get any input from the commission.

“There are two ways to get power, right, in our in society…You either get elected or you get power conferred by the elected [officials],” Do said, reiterating a point Nelson has repeatedly made.

“This is a commission that we create, right? That we oversee,” he added. “Nowhere in the process,” he said, does the procedure “ask that we have to go to them for input into what we consider to be policy.”

Additionally, Do said he and Michelle Steel did meet with four of the eleven commissioners, including the chair and vice chair, “and at the end of the meeting there was no obvious objection to anything. They understood the point we were making.”

Michelle Steel added that “everything was okay, by those commissioners,” referring to the commission’s chair and vice chair.

“When you say something on the record, like you did, that they came to a meeting and there didn’t seem to be any objections – my phone’s been lighting up all weekend, okay, from people who were in that meeting,” Spitzer said.

“There’s a sense in the community that there’s been an attempt to take over and to change the direction of the Human Relations Commission,” he added.

“There’s not this sense that there’s agreement or that people are comfortable with the process.”

Do replied that he had invited commissioners to give input.

Spitzer also suggested Do and Michelle Steel don’t believe in the mission of the commission, and that some supervisors have disagreed with certain stances the commissioners and their former executive director, Rusty Kennedy, took.

Neither Do nor Michelle Steel responded to that point. But Nelson expressed frustration with Kennedy, who officially retired earlier this year as the commission’s executive director. Nelson looked at Kennedy in the audience and said the commission would be better off without him.

“You’ve got to let go” of being involved, Nelson said. If the commission is going to continue, he added, it will have to exist “without you steering the ship.”

In proposing the changes, Do and Michelle Steel have cited an intermingling of the public image and statements of the county commission and the nonprofit.

Do reiterated that point Tuesday, saying having the nonprofit and county commission use the same name is a “misuse” of the commission’s brand and “aura.”

But the nonprofit says they’ve done everything the supervisors have asked them to do to separate the nonprofit from the commission.

“We have taken every step suggested plus some to address the concerns raised at the Board of Supervisors meetings, and in private meetings with members of the Board and your staff,” said Frank Marmolejo, the president of the nonprofit’s group’s board.

In addition to granting firing and hiring authority to the supervisors, the changes passed Tuesday move the commission’s meetings from a Santa Ana building with free parking to the county’s headquarters, where parking costs $4 per hour. And they shift meeting agenda and note-taking responsibilities from the commission’s nonprofit staff to the county supervisors’ clerk’s office.

The commission’s executive director, Norma Lopez, who replaced Kennedy in February, said in a telephone interview Wednesday she is “looking forward to working closely with [the supervisors], and supporting the commission in its work, as they…build their new path with the recent changes that have happened.”

Earlier this year, Michelle Steel and Do voted to de-fund the nonprofit’s staff support, citing intermingling of the image of the county commission and the nonprofit group.

At that June meeting, more than 50 people spoke in support the nonprofit, including law enforcement leaders who praised the group’s anti-bullying programs and efforts to lessen tensions between community members and police.

Michelle Steel and Do voted to reject the nonprofit’s county funding, but didn’t find support from a third supervisor to block the money.

The Human Relations Commission effort is the third attempt this year by Do and Michelle Steel to increase supervisors’ influence over other organizations.

In July, they tried to grant the supervisors a controlling majority on the board of CalOptima, which manages the health coverage of 800,000 Orange County residents.

That effort fell apart after it was staunchly opposed by supervisors Todd Spitzer and Lisa Bartlett and almost every member of the state Legislature, which passed nearly unanimous legislation to block Michelle Steel’s and Do’s move.

The same month, Do and Michelle Steel supported changes to the upcoming Ethics and Campaign Finance Commission that would expand their influence over the panel tasked with enforcing campaign money violations by supervisors, their election opponents, and other county-level candidates.

Do said he wanted to change the length-of-office rules voters approved, to have ethics commissioners “serve at the pleasure of the supervisor” who appointed them. While Nelson also wanted changes to the commissioners’ term length, the supervisors have not yet voted on a specific proposal.