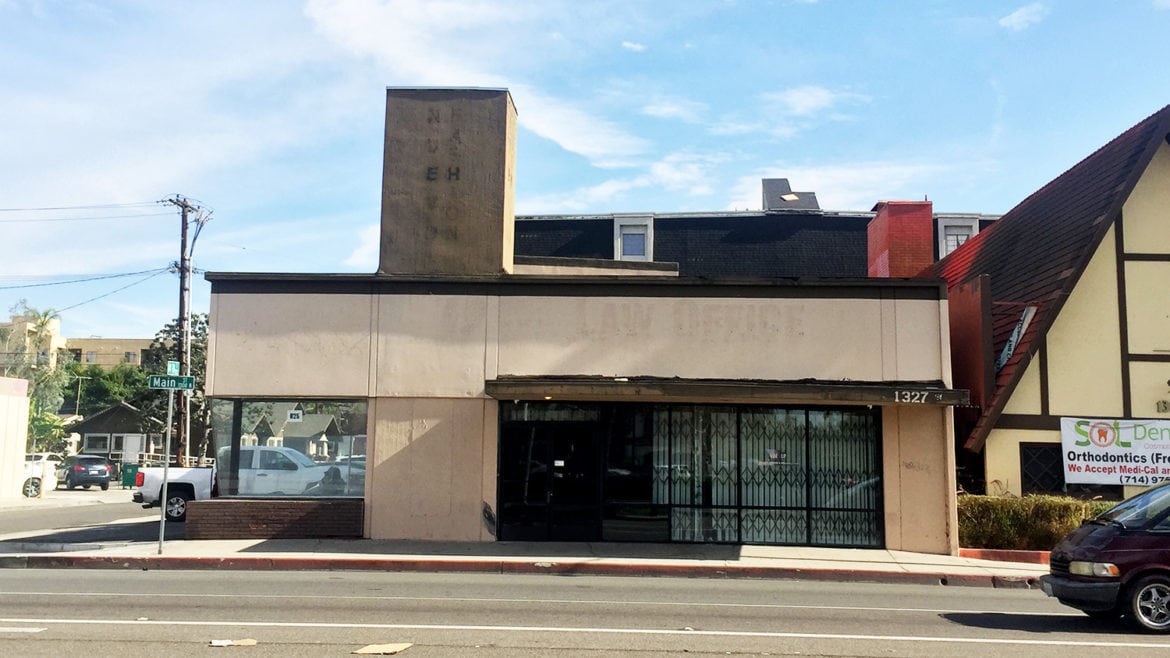 A marijuana dispensary on Main Street in Santa Ana on Wednesday, Nov. 29, 2017.

Santa Ana is the only known jurisdiction, out of Orange County’s 34 cities, to authorize the sale of recreational marijuana when that option opens up to California communities starting January 1.

Under the city’s new regulations, which received final approval on Nov. 21, all existing legal medical marijuana dispensaries – there are 17 up and running plus three in the approval process – will be able to sell commercial marijuana to people aged 21 and over once the businesses sign new agreements with the city. Permission for retail sales will be granted as long as the city determines the dispensaries have been following existing city regulations, which city staff said generally is the case.

Additionally, the city will allow up to 10 more recreational marijuana businesses, under a timeline that has not been announced, for a total of 30 citywide.

The additional 10 shops will be chosen through a point-based system that prioritizes applicants who commit to local hiring, are experienced in operating an existing commercial marijuana business elsewhere in the country, and support “community benefit and/or youth programs in Santa Ana,” among other factors.

The retail businesses will have to follow all of the city’s existing rules and regulations for medical marijuana dispensaries, including operating hours, on-site security at all times, and no on-site consumption of marijuana products, according to city staff.

City Council members are waiting to decide how many non-retail marijuana businesses to allow until after the retail shops are up and running.

The city’s ability to do this stems from California voters’ decision last November to legalize recreational marijuana, which includes regulations and taxes. The approval of Proposition 64 will allow commercial cannabis businesses starting January 1, though each city and county gets to decide whether to allow them at all, and if they’re allowed, how many can operate and what rules they have to follow.

Among the businesses that can be allowed are retail shops that sell marijuana and pot-laced food and beverages to people aged 21 and older, without requiring a doctor’s prescription.

In additional to recreational sales, the measure allows cities and counties to authorize a range of other commercial marijuana businesses, including indoor and outdoor growing (known as “cultivation”), research and development, product manufacturing, and distribution centers.

The measure also allows mobile delivery of marijuana products, which cities and counties cannot ban within their jurisdiction.

The vast majority of cities in Orange County have opted to ban all commercial marijuana businesses within their boundaries, according to the countywide association of cities.

“A majority, if not all – with the exception of one or two cities – have decided to take up moratoriums” on recreational marijuana businesses, said Diana Coronado, legislative affairs director of the Association of California Cities – Orange County.

Out of the 34 cities in Orange County, Santa Ana is the only one she was aware of that plans to allow recreational marijuana shops.

Additionally, a survey of cities by county government staff found that Santa Ana probably is alone. Two cities – Tustin and Fountain Valley – hadn’t finalized their plans when the county conducted its survey in October, though Fountain Valley has since banned all commercial cannabis businesses. The Tustin City Council still hasn’t decided what it will do, according to agenda records.

The leaders of most cities in Orange County “fundamentally disagree” with recreational marijuana, while other cities see it as a very new industry and are waiting to see how it develops, Coronado said.

As the regulations roll out, the association plans to “keep our cities informed through educational meetings and events,” she said.

In addition to the city bans, no form of recreational marijuana business will be allowed in the parts of the county that fall outside of cities, known as “unincorporated areas,” which are home to over 125,000 people. This includes the communities of North Tustin, Ladera Ranch, Rossmoor, and Midway City.

Santa Ana city staff project retail marijuana sales will generate between $1.7 million and $4.7 million in revenue for the city during the 2018 calendar year. It’s unclear how much of a decline there will be, if any, in medical marijuana revenues to the city.

The City Council has directed that the retail marijuana revenues be split in equal thirds between enforcement (like the Police Department, code enforcement, and City Attorney’s Office), community services (like parks and recreation, the city library, and Police Department-operated prevention programs), and administration (like the City Manager’s Office, Finance Department, and other city agencies), said Jorge Garcia, acting assistant to the city manager.

Staff will return to the City Council in the future with specific recommendations for allocating the money, Garcia said.

As part of the new rules, the City Council increased Santa Ana’s sales tax on medical marijuana dispensaries from 5 percent to 6 percent.

There also are questions about the city’s emphasis on having retail marijuana shops support “community benefit and/or youth programs in Santa Ana.”

Councilwoman Michele Martinez said nonprofit groups are concerned they could lose their tax-exempt status if they receive these funds. Marijuana sales are illegal under federal law, which classifies pot as a dangerous illegal drug in the same category as cocaine, LSD, and heroin.

While federal law treats it as illegal drug sales, the U.S. Internal Revenue Service – better known as the IRS – has said in court that companies have to pay full taxes on proceeds from state-legalized marijuana sales, under a code reserved for illegal drug trafficking.

Additionally, major banks do not allow money generated from marijuana sales to be deposited, since banks are regulated and insured by the federal government.

The cities’ association spoke with the U.S. Attorney General’s Office about it during a September trip to Washington, D.C., Coronado said. All of the major banks in the U.S. are federally-insured and that causes a “major” challenge for banking marijuana revenues, she said.

California legislators are now exploring the creation of state or local banks that could hold marijuana revenues without the issues raised under federal law.

In California, where marijuana businesses are legal, “our cities can participate in taking this money as a revenue source” and won’t face penalties, Coronado said.

Santa Ana’s commercial pot regulations were approved partly on 5-0 votes, and while other parts were approved 4-1, with Martinez opposing. She said the city could go a lot further in ensuring marijuana sales lead to social justice and equity.

“We shouldn’t have to move so quickly,” Martinez said.

None of the existing medical marijuana dispensaries have opposed the idea of being required to provide community benefits and hire local residents, said Councilman Jose Solorio.

Mayor Miguel Pulido and Councilman Vicente Sarmiento both abstained from discussing or voting on the marijuana regulations.

Sarmiento said he was still awaiting an opinion from the California Fair Political Practices Commission about whether he could participate. Pulido did not explain why he was choosing not to participate in making the marijuana regulations.

State law requires city council members to verbally announce any financial conflicts of interest they have when an item comes up at a council meeting, leave the room during the discussion, and not participate in the decision.

In a phone interview, Pulido said he recused himself because one of his lead fundraisers, Melahat Rafiei, represents marijuana dispensaries in the city, through the Santa Ana Cannabis Association.

“I’m recusing myself for the same reason I recused myself every time for about the last year or so, and that is namely – and I stated that – my financial chair and advisor, my good friend – her name is Melahat,” Pulido said. “You know she’s very active with the association here in Santa Ana, and so I don’t want to have any conflict or the appearance of conflict, and so I choose to recuse myself.”

The mayor said he does not have any investments or ownership interests in marijuana dispensaries or businesses.

Sarmiento said Wednesday he recused himself because “I’ve been retained by some public agencies to consult in this space. I don’t have an investment interest or any sort of relationship to any of the operators in our city. It’s just that I represent the agencies in other communities that have asked me to be” a legal counsel.

In some cases, he said he has recommended cities not move forward with allowing and regulating cannabis, and that they should instead do “an outright moratorium.”

“It really is out of an abundance of caution,” Sarmiento said of why he recused himself, pending the state commission’s advice. “I don’t think there is any technical conflict, but I don’t want there to be any perceived conflict either.”

Correction: A previous version of this story incorrectly stated Santa Ana would be allowing commercial marijuana manufacturing, testing, distribution, and indoor growing facilities. This has been proposed by some council members but the full council is waiting to decide how many to allow until after retail stores are up and running.