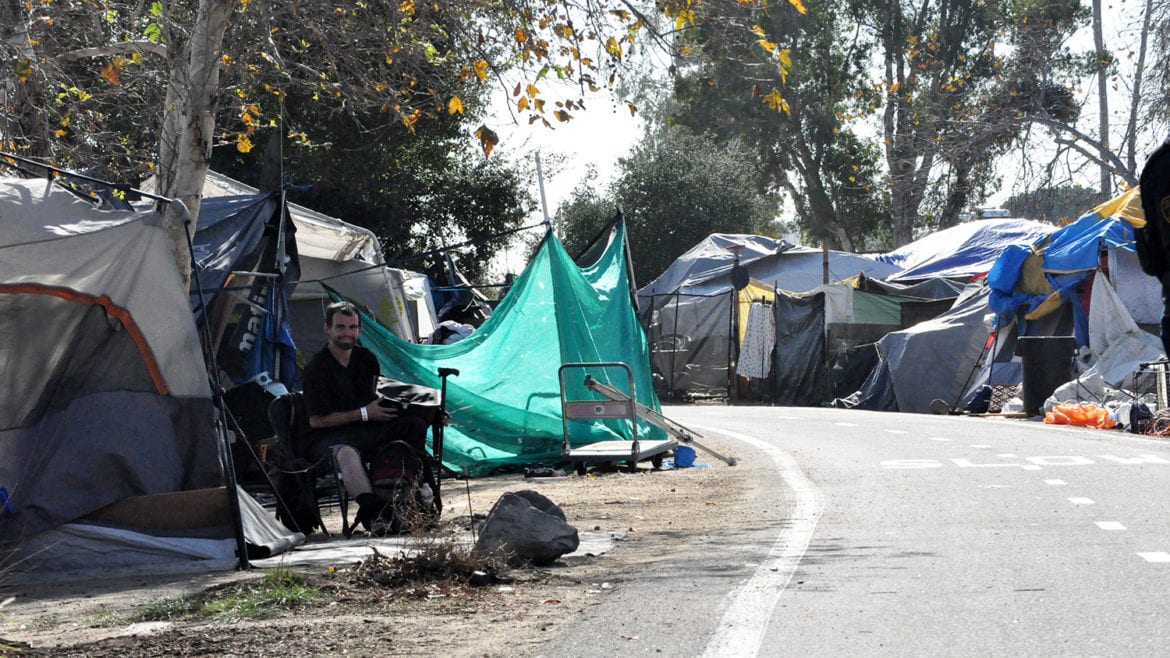 A man packs his belongings and prepares to leave the Santa Ana Riverbed homeless encampment. Feb. 1, 2018

Orange County officials have a federal judge’s green light to clear out the county’s largest homeless encampment starting next Tuesday, but only if they provide an alternative bed for each of the estimated 400-plus people at the Santa Ana River encampment.

After pressure from U.S. District Judge David O. Carter to reach a quick solution during an all-day court session, county officials and lawyers for homeless people agreed Tuesday night on language for written notices ordering people out of the riverbed and offering temporary shelter.

“On Tuesday, February 20, 2018, at 9:00 a.m., all persons presently living on the Santa Ana River between Ball Road/Taft Avenue and Memory Lane must move out of and leave the Santa Ana Riverbed,” the court-authorized notice states, referring to an area that encompasses the encampment.

“Anyone who wants to be placed in a motel will be offered a motel room for a minimum of 30 days while the County completes a housing assessment and opens additional facilities that accommodate the needs of people with disabilities, and their pets when possible.

“Services for Veterans and Domestic Violence survivors and other homeless will be on site. Judge David O. Carter will be present to oversee the process.”

It concludes: “In motels, people will continue to receive services from County mental health and health care workers who will visit the motel locations and ensure that transportation is available to any medical, social service, or housing appointments. For people who are placed in motels, the County will make provisions for access to food.”

The notices were the result of the negotiations Tuesday overseen by Carter, who is presiding over two lawsuits that challenge the evictions until there’s an adequate alternative place for people to go without being arrested for camping.

The notice says it’s being issued at Carter’s order, and it’s scheduled to be posted Wednesday along the riverbed after Carter completes a walking tour of the area with attorneys for the county, local cities, and homeless people.

(Click here to view the entire notice regarding the evictions and temporary housing.)

Details remain to be worked out, like how many dogs people can bring with them and whether the county will provide the same level of medical and other services if the motels people are staying at are spread over a wide area. And the lawyers still had major disagreements Tuesday night about what should happen after the 30 days people would be in motels.

Tuesday evening, Carter suggested it may make most sense for the county to centralize emergency shelter beds by placing individual pre-fabricated tiny homes, known as Tuff Sheds, on vacant county land with food, medical, and sanitation services on site.

“If you put [it] all together, it solves the problem,” Carter said.

County officials said they first want to try finding motel rooms and would try clustering them close together.

The court hearing lasted about 10 hours Tuesday, running from 8:30 in the morning to 9:20 at night with two breaks, for lunch negotiations and a 40-minute dinner.

Throughout the hearing Tuesday, Carter deferred to county officials to come up with policy proposals, while weighing in on what he viewed as reasonable to “humanely” remove people from the riverbed.

The judge told both sides he would allow the riverbed to be cleared a few days later. But he made clear he wouldn’t let that happen unless county officials find temporary shelter for everyone at the riverbed who wants it.

During a more than three-hour morning session, Carter pressed county officials and homeless people’s attorneys to come up with a mutually-agreeable deal to get the riverbed cleared quickly and alternative shelter provided for everyone there who’s willing to take it.

That prompted hours of negotiations between the county and lawyers for the homeless people, Carol Sobel and Brooke Weitzman, at the federal courthouse in downtown Santa Ana.

Around 4:30 p.m., county supervisors’ Chairman Andrew Do told Carter the county was pledging to immediately provide up to 400 motel rooms for people at the riverbed, as well as additional emergency shelter beds, for a total capacity 700 to 800 beds specifically for the riverbed inhabitants.

The county’s plan was to develop the non-motel shelters during the 30 days people are staying in motels. That additional shelter could be tents or tiny “Tuff Shed” homes on empty county land in Anaheim, Orange, and Santa Ana.

The properties mentioned by county officials for additional bed space are the existing Kraemer shelter in Anaheim and its parking lot, the WISEPlace women’s shelter in Santa Ana, a county public works parking lot in Orange across the riverbed from the ARTIC transportation center, and vacant county land near the Registrar of Voters office in Santa Ana.

It was unclear Tuesday night what type of shelter would be available – and where – Feb. 20 when the evictions are scheduled.

Throughout the day, Carter expressed frustration at the county’s build-up of unspent money that could help alleviate homelessness.

The judge twice played video of county Supervisor Todd Spitzer telling the Anaheim City Council in September that “the county has hundreds of millions of dollars to spend to assist the homeless and it has not spent those monies. That’s shameful.”

The judge said he agreed with Spitzer that it’s “shameful.”

“We’re done with chipmunking this money…an accumulation of $700 million,” Carter said. “I’m wondering why this money couldn’t have been spent earlier to alleviate this problem. Not solve it. Alleviate it.”

Carter said at this time, he was not ordering a “forensic accountant,” who would investigate county finances.

Instead, the judge repeatedly reminded the county about the unspent funds as he nudged both sides toward an agreement on the evictions and expanded shelter.

Carter said progress will be made on homelessness, then winked at the county attorneys while loudly whispering, “ ‘cause we’ve still got $700 million.”

He later added: “Nobody wants to be back in federal court” saying they’ve got $692 million in unspent money.

“Don’t ever tell me what I’m supposed to do. You do it, with your $700 million,” Carter replied, winking to the county lawyers. “You don’t want me to go further with that…trust me.”

A review of county finance records shows the county’s largest pot of unspent dollars, aside from emergency reserves, is about $185 million in state Mental Health Services Act money beyond the state-recommended reserve levels.

In 2015 Voice of OC broke the story that the county had $220 million in unspent state mental health services funds. That amount grew to $256 million at the end of the last fiscal year, of which about $71 million was the state-recommended reserve level, leaving $185 million in beyond the reserve.

The county’s homeless services coordinator, Susan Price, disputed claims the county has accumulated $700 million in money that could assist with homelessness. She said money referred to by Carter is being spent on services, such as housing vouchers that go to people who were not homeless before they got their voucher as well as people who were homeless.

As for the pace of action at the riverbed, Carter recalled a tour he took of the riverbed camp last year when he was presiding over a different case. He said the county hadn’t provided plastic bags for people to throw away trash.

But once the judge started picking up trash and feces himself, suddenly trash bags were brought out 20 minutes later, Carter said.

The judge also questioned the county’s past actions, pointing to a Voice of OC article last month about the supervisors quietly deleting a prior county commitment to make affordable housing expansion a “top priority” of the county’s Commission to End Homelessness.

When faced with court pressure, the county in one day agreed to provide more beds for homeless people than it has for the past several years.

At the same time, Carter said he believed county officials, including Do, were acting in good faith Tuesday and complimented their commitment to find hundreds of new beds for the riverbed population.

Carter also pressed lawyers for homeless people, saying there will be people at the riverbed who refuse to leave, and that law enforcement will have to remove them.

In particular, he cited the example of a man he called “Chandelier Man,” who Carter said has a chandelier at his riverbed camp and likes to shoot golf balls into the riverbed.

Late in the evening Tuesday, Carter grew frustrated when he found out county supervisors wouldn’t be meeting until Thursday or Friday to decide on the motel and shelter offer Do put forward.

Carter reminded county attorneys he told them Tuesday morning he would be in court until midnight.

“If I’m sitting here as a federal judge until midnight, you’d have a hard time explaining to me why county officials aren’t working ’til that time,” Carter said, leaning over a podium and looking over glasses, his brow furrowed.

Page, the county’s top attorney, replied that board approval isn’t needed to accomplish the things Carter was talking about.

But Sobel, one of the lead attorneys for homeless people, said Page’s remark goes against what Do had said about board approval being needed regarding properties and expenditures of funds.

County officials indicated the supervisors will be holding a special meeting later this week about the eviction and shelter issues.

At multiple points Tuesday, Carter emphasized he will be monitoring the eviction and shelter process closely, including by visiting the riverbed multiple times.

Carter planned to tour the riverbed camp at 6 a.m. Wednesday with lawyers from all sides of the lawsuits, and then re-open the court hearing around 10 a.m. to hear input from members of public who wish to speak to the court about the riverbed evictions.

The first lawsuit on behalf of homeless people was filed by Weitzman and Sobel on behalf of seven homeless people and the Orange County Catholic Worker, and centered on claims there are too few shelter beds to accommodate the riverbed population, and that the evictions effectively criminalize homelessness due to cities’ anti-camping and anti-loitering laws.

The second suit was filed by the Legal Aid Society of Orange County and focused on disabilities of homeless people at the riverbed and alleged inadequacies of existing shelter to accommodate their disabilities.