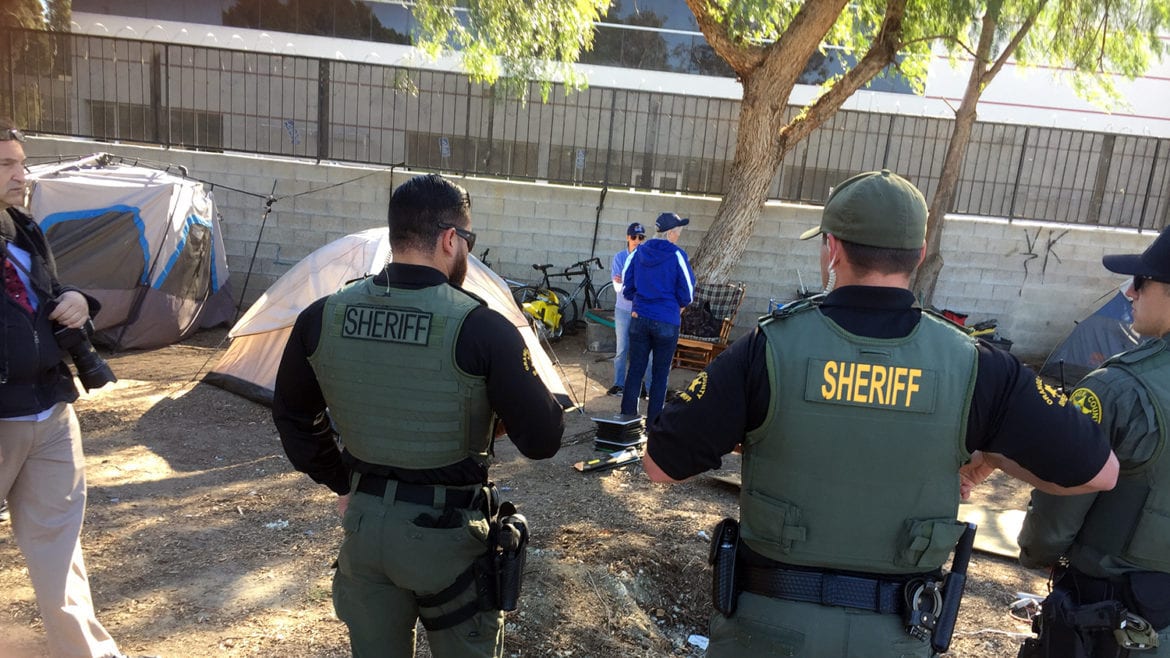 Sheriffs deputies at the north side of Santa Ana riverbed homeless camp, near Taft Avenue Feb. 20, 2018.

U.S. District Court Judge David O. Carter Tuesday lifted a temporary restraining order against the County of Orange, allowing it to begin evicting as many as 400 homeless people who still live along the Santa Ana Riverbed.

Carter convened an 8 a.m. court hearing at a fold-up table in the parking lot of the Honda Center, where he told attorneys that people living along the riverbed have had plenty of time to prepare to leave.

“I’ll be out of your way, but I’ll be here,” Carter said to county attorneys during the informal hearing. “This is not going to be perfect. You’re going to have extraordinary complaints along the way.” 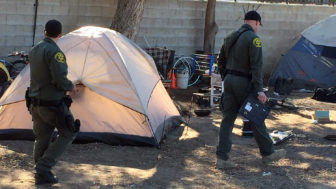 Sheriffs at the north side of camp, near Taft Avenue.

The end of the restraining order will allow the county to arrest and cite homeless people who refuse to leave, although county counsel Leon Page said “our goal is zero arrests today.”

The lifting of the temporary restraining order raised immediate concerns from attorney Brooke Weitzman, who is representing seven homeless people who live along the riverbed. Weitzman said homeless people should have the right to leave the riverbed – to eat, use the bathroom, go to work and take care of other needs – without facing the threat of arrest for returning.

“You conduct yourself the way you feel is appropriate,” Carter told county attorneys. “You decide to arrest people on the way, but that’s your decision.” 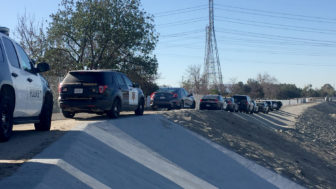 Sheriffs deputies begin to roll in to the north side of the camp from Taft Avenue just before 9:15 am Tuesday.

County officials and Sheriff’s deputies flooded the northeast end of the riverbed, between Taft Avenue/Ball Road and Memory Lane, Tuesday morning and began notifying people of the judge’s order. Their plan is to clear the riverbed section by section.

Sheriff’s deputies began by asking people living along the riverbed for their names and pointing them to county service workers.

By 10 a.m., roughly 100 people were lined up to receive county services. But both county officials and riverbed residents said some homeless people who either left the riverbed when told to by sheriff’s deputies earlier this month or never lived on the riverbed also are seeking the motel rooms.

One man told a reporter he was homeless in Santa Ana but rode his bike to the riverbed Tuesday, hope to gain shelter in a motel room.

Sheriff’s deputies originally began the eviction Jan. 22 when they walked tent-to-tent and told people they have to start packing up and getting ready to leave under “voluntary compliance.”

One week after the evictions started, a lawsuit was filed Jan. 29 by attorneys Weitzman and Carol Sobel on behalf of the local nonprofit Catholic Worker and seven homeless individuals.

Enforcement efforts kicked up Feb. 1 when officers from the probation and parole departments accompanied sheriff’s deputies and started doing parole and probation checks, along with warrant checks on the homeless still living in the riverbed.

The increased enforcement, coupled with the anti-camping and anti-loitering laws in the surrounding cities drew concern from Carter, who issued a temporary restraining order against the county Feb. 6 that stopped the evictions.

Since the eviction began and before Carter made both sides work together, many of the homeless said they didn’t know where to go. As of Monday night, many people were awaiting state-issued identification cards so they can be booked into motels. A number of the homeless said being in a motel will make it easier for them to find work, since they’ll have a place to shower and keep their stuff during the day. 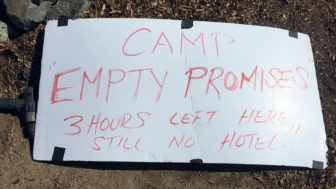 A sign from the north side of the homeless encampment near Taft Avenue.

“I think the homeless residents are ready to go.  [But] the county doesn’t have any place for them to go,” Weitzman said.

But officials acknowledge they have had difficulty obtaining more motel rooms. The originally promised to get at least 400 rooms.

“We’ve had reservations, people en route, and the motel owner calls and backs out,” Page said.

Carter surprised county officials Tuesday morning by delivering a Tuff Shed to the parking lot of the Honda Center – a temporary wooden shed typically used for outdoor storage – and told county officials he has the president of the company on the phone ready to chat.

“That’s a Tuff Shed. You don’t have to buy it but I’m tired of people not knowing what they look like,” Carter said.

Carter declined to answer news media questions, but stayed at the riverbed with his staff.

Orange County native Larry Ford, a former general contractor who’s been unemployed and homeless for three years due to a knee injury, said he found work directly across the river from the homeless camp at the Honda Center as a line cook.

The 30-day motel stay will give Ford time “to stabilize things” and save up to look for a permanent place to stay.

He warned that homelessness could happen to anyone.

“It’s just one of those things, you know … I owned a home, I’ve built many a home,” Ford said. He used to do minor electrical work, stucco, framing, painting, flooring and other residential construction before his injury.

Cherie Anders, a 31-year-old woman from Maine, said she has been in Orange County for at least four years, coming west for family reasons and living on the riverbed since 2016. She said she’s been struggling with anxiety and other “mental issues,” is waiting for a state identification card and hopes to get into a motel as quickly as possible.

“Once I get that (motel room), I can get a job and into housing, all that stuff,” Anders said. “If they’re (the county) going to help, let’s use their help to get better than just going back to doing nothing with your life. Try to change your life. I’m definitely going to use it to try to change my life. Thank you Judge Carter.”

Meanwhile, 55-year-old Jeff Bronniche, a Minnesota native who’s been in Orange County for over 30 years, said he’s struggling trying to get a motel because his girlfriend’s mental healthcare worker is on vacation and he wants to stick with her in the move instead of splitting up.

“She’s gone until Tuesday when all this will be over,” Bronniche said, who injured his back doing masonry work and has struggled ever since. “We’ve been on the (housing) list for six, seven months.”

After his injury, Bronniche said became addicted to painkillers, then eventually heroin.

“I don’t use to get high. I use to get my head clear out here,” Bronniche said, adding that life in the riverbed can “be overwhelming” at times.