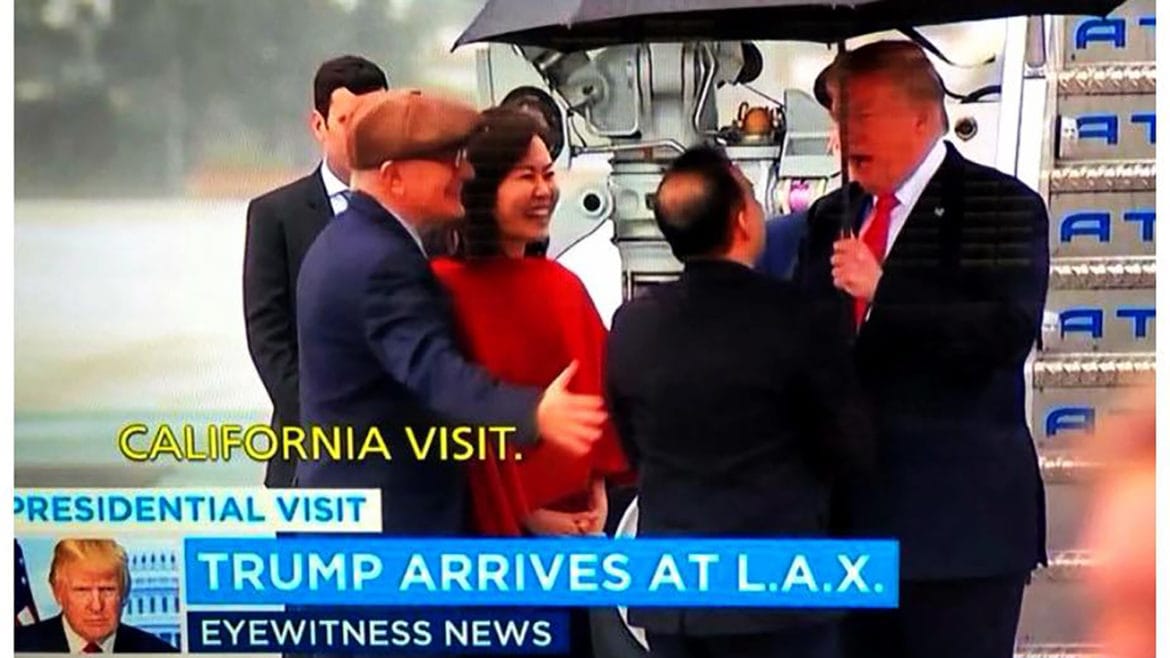 Orange County Supervisor Michelle Steel was the only elected official to greet President Trump when he landed at LAX this week during his first visit to California since becoming president.

Steel and her husband, Shawn Steel, a prominent GOP leader who serves on the Republican National Committee, were two of the three people who welcomed Trump on the airport tarmac around 3:30 p.m. Tuesday and spoke with the president, according to news reports.

In a Facebook post about the greeting, Shawn Steel said it was “a great thrill and honor.”

“Only three of us greeting the president,” he added.

The third member of the greeting party was Andy Gharakhani, who leads the Los Angeles chapter of the conservative political action group New Majority. No Los Angeles officials were there to greet the president, according to news reports and photos of the president’s arrival.

During the greeting, the president asked, “What’s the situation in California?” to which Shawn Steel replied California Republicans are united behind Trump, unlike in the 2016 presidential primary, according to a tweet by Los Angeles Times reporter Seema Mehta.

In another post about the greeting, Steel said he had “a couple of intimate minutes with the President asking about our Party & what’s wrong with Jerry Brown.”

Trump was in town to attend a Tuesday evening fundraiser in Los Angeles.

The Steels did not plan on going to the fundraiser, and instead headed to a restaurant for Korean food, according to Mehta’s tweet.

Michelle Steel didn’t return phone messages asking how her conversation went with the president, what was discussed, and whether she attended the fundraiser. Her spokeswoman, Michelle Cook, said early Wednesday afternoon she would relay the questions to the supervisor, who Cook said was in a meeting.

The president started his California trip in San Diego County, where he arrived Tuesday morning and toured prototypes of the U.S.-Mexico border wall he has promised to build. During the visit, he said California is putting “the entire nation at risk” by not taking stronger action against illegal immigration.

Tuesday also was the day of the county supervisors’ regular meeting, where they discussed and decided on issues ranging from mental health spending, homelessness, and the controversy over taxpayer-funded mass mailings featuring the supervisors’ names.

With a packed agenda, the meeting went well into the afternoon, with public comments starting around 3 p.m.

Steel attended the morning session, and the supervisors typically take a break for lunch and a closed session sometime between noon and 12:30 p.m.

At 11:40 a.m., about 20 minutes before the usual time supervisors start talking about a lunch break, supervisors’ Chairman Andrew Do was starting to call the next agenda item and stopped himself.

“Supplemental [item] 29 – No,” Do said, before pausing and changing direction. “At this time…I would like to recess to closed session.”

“We do have some matter of urgency that we want to take care of,” Do said.

Some members of the audience grumbled. Dozens of union workers in green shirts had come to the meeting that morning wanting to speak during public comments.

Do explained: “Audience, the reason we are breaking for closed session is Supervisor Steel has an urgent matter. She has to leave by noon. And we do have closed session items that are litigation-related. So we do have some time urgency, that we need her input on.”

There was no further explanation of why Steel was leaving the meeting.

Steel was not present when supervisors returned for open session around 2 p.m. to hear items on mental health spending, homelessness, and public comments. One of the items, regarding new rules for supervisors using taxpayer funds to send out mass mailings featuring their names, deadlocked on a 2-2 vote.

In January, Steel used taxpayer money to send 16,000 mailers to voters prominently featuring herself and District Attorney Tony Rackauckas while they run for re-election.

The mailers invited recipients to RSVP for a “community coffee” with them at the home of a Costa Mesa City Council candidate. While the mailer was sent to 16,000 voters, Steel’s staff knew the venue only could handle 50 people, according to county emails.