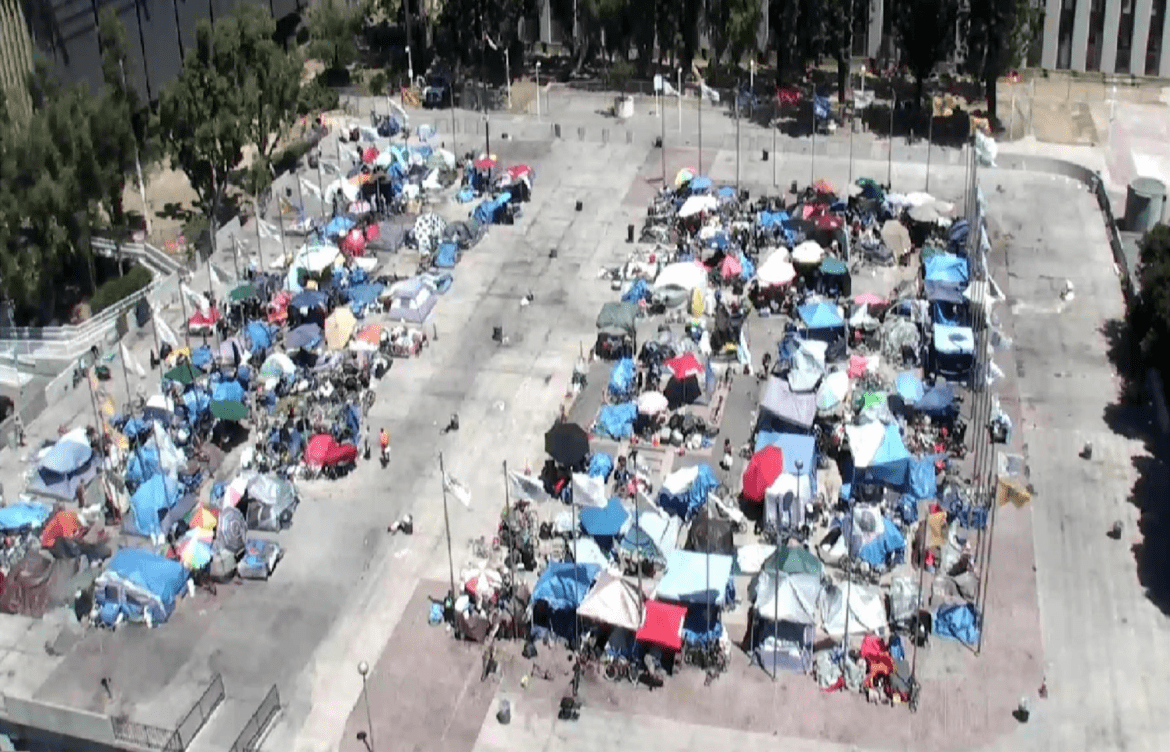 A view of the homeless camp at the Plaza of the Flags next to Santa Ana City Hall and Orange County's main courthouse.

They said it revealed a double standard: It’s okay to put shelters near poor kids but not near kids from wealthier families.

The frustration came amid pressure to expand shelter options for Orange County’s homeless people. Those efforts appeared to suffer a setback Tuesday when county supervisors voted to cancel plans to explore placing homeless shelters in Irvine, Laguna Niguel, and Huntington Beach. That decision followed a backlash from residents worried about safety risks to their children.

“Santa Ana has always carried more than its burden in the county,” Do told a special Santa Ana City Council meeting Friday.

“What we saw with the vote – with the hysteria from Irvine, is this: It’s simply a class-based argument that if ‘I pay enough for where I live, I shouldn’t have to deal with my homeless problem. I should shift it to some other city,’ ” said Do, whose district includes Santa Ana.

The county’s largest homeless shelter, known as the Courtyard, is one block from a high school in Santa Ana – the Nova Academy – and four blocks from Santa Ana High School. The Courtyard shelters about 400 homeless people.

“We have data, we have statistics, that show concretely that Santa Ana is being dumped on [with homeless people from other cities]. And when Supervisor [Todd] Spitzer promised to clear out the riverbed [homeless camp] without creating the infrastructure, where does he think the people are gonna go?” Do asked.

“It is time we say ‘enough is enough,’ ” he added. “We will do our share but we will not be dumped on.” The audience broke into loud applause.

Do’s remarks came before a federal court hearing Tuesday that could determine whether other cities throughout the county will step up to host shelters for homeless people relocated from the Santa Ana riverbed and the Santa Ana Civic Center.

His comments had broad support from City Council members and the roughly two dozen city residents who attended the meeting. One resident said there wasn’t a larger turnout because many of the city’s residents have to work during the day. Irvine and Laguna Niguel held special evening meetings last week and had large turnouts.

“I am very outraged, as you are, by some of the comments I heard by our [county] supervisors that tend to put more value in families and children outside our city above ours,” said Councilman Vicente Sarmiento.

“Why wouldn’t they have been outraged by all the impacts [on] the city of Santa Ana and our families,” he added. “That really was offensive.”

“We support you in pushing back at the OC supervisors’ decision,” said Susana Sandoval, a resident who spoke at the meeting. “This decision is blatantly an economic class discrimination against Santa Ana. We are horrified by the living conditions of the homeless population on South Main Street and the devastation in our neighborhoods.”

“Enough’s enough,” said Phil Bacerra, a Santa Ana planning commissioner. “Our city has provided compassionate resources for all the folks that are out there and…the 33 other cities in this county have taken advantage of that.”

The City Council will decide Tuesday night whether to sue the county for allegedly neglecting its homelessness responsibilities. In preparation, the council voted 6-0 Friday to direct city attorneys to prepare research for it. Such a lawsuit has been talked about for months by Sarmiento and other council members.

“My expectation is that come Tuesday, we’ll be able to come out here and declare to the residents of Santa Ana that the city of Santa Ana [is] standing with them, standing for them, and that we are going to court to fight for them,” said Councilman David Benavides.

The City Council has not said what it wants county officials to change about their current practices. Councilman Jose Solorio has said they should send a “wish list” to the county before moving forward with such a suit.

After the supervisors started exploring the idea of the three shelter sites, Spitzer, the county supervisor, warned a packed room of concerned Irvine residents that a homeless shelter would host “the worst of the worst” people and put their children’s safety “in jeopardy.”

Do criticized Spitzer for “fear-mongering,” and said Spitzer was trying to exploit people’s fears to help his countywide campaign for district attorney. Do has endorsed Tony Rackauckas, who is running for re-election.

“I will not stand by idly to have one of my colleagues, Supervisor Spitzer…campaign on the back of the people of the city of Santa Ana. I will not allow and tolerate the kind of fear-mongering, the kind of class-based type of maneuver that’s being used to influence policy at the Board of Supervisors,” Do said at the Friday council meeting.

Benavides, the councilman, said Spitzer and other supervisors, by fighting against the expanded shelters elsewhere, were “trying to score points politically…at the expense of our kids, of our families, of our neighborhoods.

“They’re going out there trying to make a name for themselves. So please remember that,” he said, also noting Spitzer was running countywide for district attorney. He called on Santa Ana residents to “spread that word” and show at the ballot box that “we’re not going to put up [with] that.”

The discussion came as officials, under pressure from U.S. District Judge David O. Carter, prepare to relocate about 200 people from the Santa Ana Civic Center to shelter elsewhere. That relocation is scheduled to start Monday and is expected to take several days, and questions remain about where people will go.

Santa Ana’s potential lawsuit against the county would center on allegedly managing its homelessness responsibilities, including county supervisors’ stockpiling of about $186 million in mental health money that could have helped house and treat people with serious mental illnesses who have been living on the streets.

During the earlier parts of the meeting, Mayor Miguel Pulido said the council was considering “suing all the cities in the county in order to to bring them into the court with Judge Carter.”

But the council did not end up announcing any action to follow through on that, and it’s unclear if the city has legal standing to do so.

At the suggestion of Councilwoman Michele Martinez, the council also voted to have the city count homeless people over the next few days, so an updated number would be ready in advance of Tuesday’s court hearing. Martinez said she would participate in the census and invited community groups and other officials to join.

At Solorio’s suggestion, the City Council will vote at their regular meeting Tuesday on adopting an “aggressive and safe panhandling ordinance.” The meeting agenda suggests it has support from three council members – Solorio, Michele Martinez, and Juan Villegas – and would need just one more council member’s support to pass.

Also at Solorio’s suggestion, the council on Tuesday will consider sending “courtesy notices” to other cities in Orange County telling them to stop dumping homeless people in Santa Ana.

At a March 17 hearing, Carter, the federal judge, warned other cities they need to stop dumping homeless people in Santa Ana and other cities.

Carter told a room full of city and county officials if any more dumping took place, he would seek a federal investigation and convene a grand jury. He pointed to a federal prosecutor in the audience.

There is at least one local precedent of criminal and civil charges for homeless dumping.

In 2006, the Los Angeles city attorney filed criminal and civil charges against Kaiser Permanente for dumping a 63 year-old homeless woman who had dementia on Skid Row in her hospital gown and slippers.

The criminal charges included false imprisonment and dependent adult endangerment. A settlement agreement was ultimately reached in that case.

Nick Gerda covers county government and Santa Ana for Voice of OC. You can contact him at[email protected].