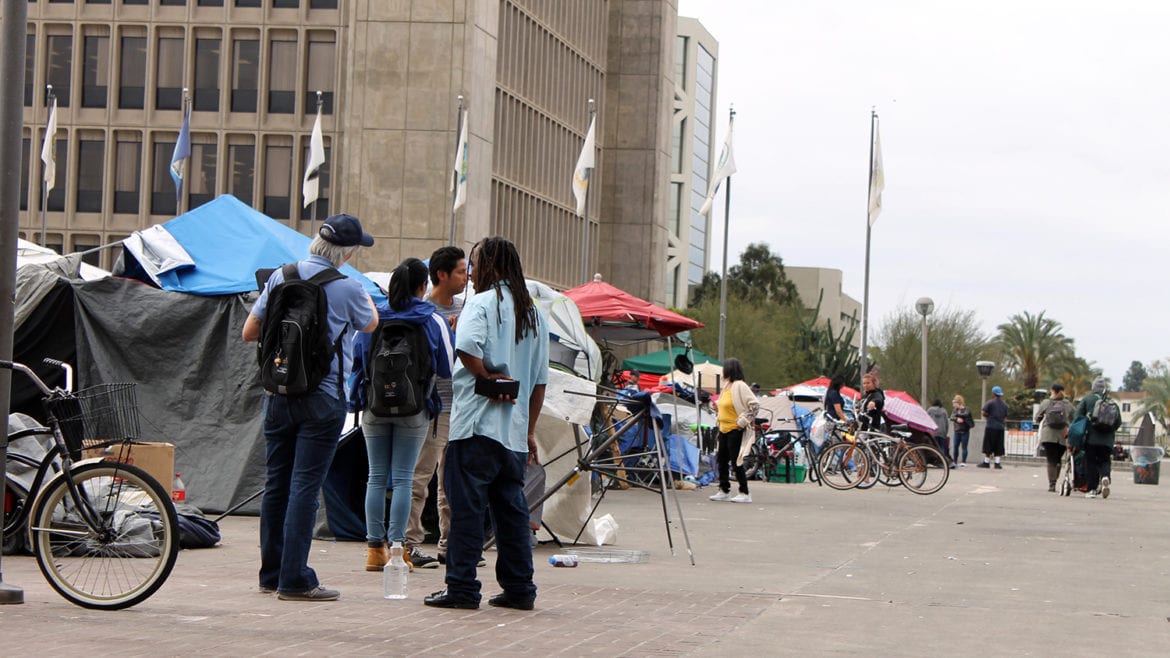 U.S. District Judge David O. Carter Tuesday called on Orange County cities to each take care of their “proportional” share of the county’s homeless population, telling a crowd of public officials to drop the idea homelessness is not their problem.

The judge acknowledged he has no jurisdiction in this case over most of the county’s cities, but said officials should step up and commit properties as a site for a possible emergency homeless shelter.

“If we can’t find one piece of property…that means we can never reach any kind of proportionality,” Carter said. “I wish you gave me the power and I would just pick the location, but I can’t do that, I’m a judge.”

Although the judge has not issued any broad orders, he could be forced to act if attorneys on behalf of homeless people, Brooke Weitzman and Carol Sobel, decide to request a temporary restraining order to stop the county and three other cities named in the case, Anaheim, Costa Mesa and Orange, from enforcing anti-camping and anti-loitering laws.

Anti-camping ordinances make it a crime to sleep on the streets and other public spaces, but a 2006 Ninth Circuit Court of Appeals case, Jones v. City of Los Angeles, prohibits enforcement of those laws when shelter and services are not offered or unavailable.

Sobel was one of the attorneys defending homeless clients in the Jones case.

Carter has repeatedly warned cities he believes they are vulnerable to future litigation over those laws and noted if the City of Santa Ana follows through on a threat to file a cross-complaint, other cities could be added to the case and potentially subject to having their anti-camping laws suspended.

Sobel said at Tuesday’s hearing that while she believes her team has worked well with Orange County, there have been issues.

“If you asked me today, knowing what I know about the beds, I think we need a TRO to prevent people from being pushed out on the street,” Sobel said.

The protests highlighted rifts between wealthier south Orange County cities and the county’s dense, urban core, where all of the county’s publicly-run homeless shelters are located.

But Carter noted there are homeless people all around Orange County, briefly citing statistics from the most recent countywide homeless count.

The 2017 Point-in-Time count estimated there were 4,792 homeless people in Orange County. Of that number, 2,584 were sleeping outside, 1,248 were in emergency shelters and 960 were in a transitional shelter.

This past weekend, Santa Ana officials conducted a citywide count and found 1,030 unsheltered homeless people living within city limits. More than half of the people who answered questions said they were not from the city, city staff said.

City officials have said they have evidence that other cities and organizations have been “dumping” homeless people in their city, especially at the Civic Center where there has been a homeless camp for years.

Santa Ana spends an estimated $17 million per year on homelessness, according to city staff.

Santa Ana City Council members Tuesday night voted unanimously to have staff draft a letter to the other Orange County cities, demanding greater participation from them in addressing the county’s homelessness crisis, and monetary compensation for Santa Ana’s costs for homelessness.

“Everybody has to do their part,” said Mayor Miguel Pulido. He said Santa Ana may sue the other cities to bring them under Carter’s jurisdiction so he has “power over them” as officials try to address the regional homelessness issue.

Supervisor Andrew Do, whose central Orange County district includes Santa Ana, said less than half the people at the Courtyard Transitional Center, an emergency shelter at an open-air bus terminal, come from Santa Ana.

“We have people coming from Huntington Beach to La Habra, from Fullerton to San Clemente. It’s all over, it’s not just Central Orange County,” said Do. “So it’s accurate to say that every city in this county has a homeless problem.”

Do said he and Supervisor Shawn Nelson are not “wedded to any particular location” but the county selected three locations after cities failed to come forward with their own suggestions.

“I believe, your honor, the time has come for the court to act,” Do said.

At a hearing last month, Carter warned cities to stop any “dumping” activity or risk a possible federal investigation by Senior Counsel to the U.S. Attorney Dennise Willett, who is chief of the department’s Santa Ana office. Willett also was present at Tuesday’s hearing.

Carter said “dumping” not only includes allegations that police agencies and other organizations are dropping off homeless people in Santa Ana, but also scenarios where agencies take people to Santa Ana to sign up for social services and leave them there.

While the judge often has been a demanding and forceful presence at hearings in the past, he took a gentler approach to Tuesday’s hearing. Carter told officials that while he expects to see solutions quickly, he also wants to give them the time and space to collaborate and form “coalitions of goodness.”

Several mayors who spoke at Tuesday’s hearing, from cities like Anaheim, Santa Ana, Orange, Fullerton, Tustin and Huntington Beach, say their cities have and continue to step up to address homelessness.

Do noted that no city, including Santa Ana, wants to host homeless shelters and service centers, pointing to a 2014 Santa Ana City Council vote to reject a shelter site proposed by the county.

“Do not think for a moment Santa Ana said, ‘hey just bring it all into our city.’ That was never the case and still is not the case,” Do said. The city, however, eventually accepted the Courtyard Transitional Center, and “It was because of that magnanimous act that we have the only emergency homeless shelter in this county.”

The only official from South Orange County to speak was Irvine Mayor Don Wagner, who, despite the uproar from his residents to oppose the emergency shelter, rejected the notion that city leaders gave into a not-in-my-back-yard mentality.

Irvine leaders argued the 100-acre property identified by the county for an emergency shelter, just south of the Great Park, is not fit for human habitation and lacks infrastructure like electricity and plumbing. They also objected to the fact that city leaders were not consulted or warned about the selection of the site.

Irvine voted to sue the county over the shelter proposal, but after supervisors backed off the proposal, the city has decided not to pursue the lawsuit, Wagner told reporters after the hearing.

Wagner pointed to two nonprofits that help the homeless in Irvine, which receive city funding, and said the city has discussed committing $29 million in former redevelopment agency money to a land trust dedicated to building affordable housing.

Wagner also said the city is exploring the use of a building owned by the Irvine Company as a possible emergency shelter for women and homeless veterans.

“I will assure this court that this city and I stand prepared to do our portion, our share, and perhaps a bit more,” Wagner said.

“Are you dedicated to this idea of holding your own in south county?” Carter asked.

Wagner said he could not speak for other cities, but “Irvine is absolutely committed to a regional concept.”

Carter said the organizing by Irvine residents is part of a healthy democracy, but it’s “not good if we can’t eventually get the minimal thing of an emergency shelter in south county and the western part of the county.”

“If I don’t have that kind of commitment, it’s meaningless — we’re just going through the same process year after year,” Carter said. “I might as well know that now.”

Wagner, after consulting with other officials, set April 19 for a discussion among south county mayors of a regional approach to homelessness.

As Carter adjourned Tuesday’s hearing just before noon, he asked city managers and mayors to stay behind and speak with a mediator he invited to the hearing. No action was reported from that discussion.

“You’ve accomplished amazing things,” Carter told the county officials during the hearing. “It’s just the hole was so deep to begin with. It’s almost running breathless to catch up to the crisis.”

Voice of OC reporter Nick Gerda contributed to this story.