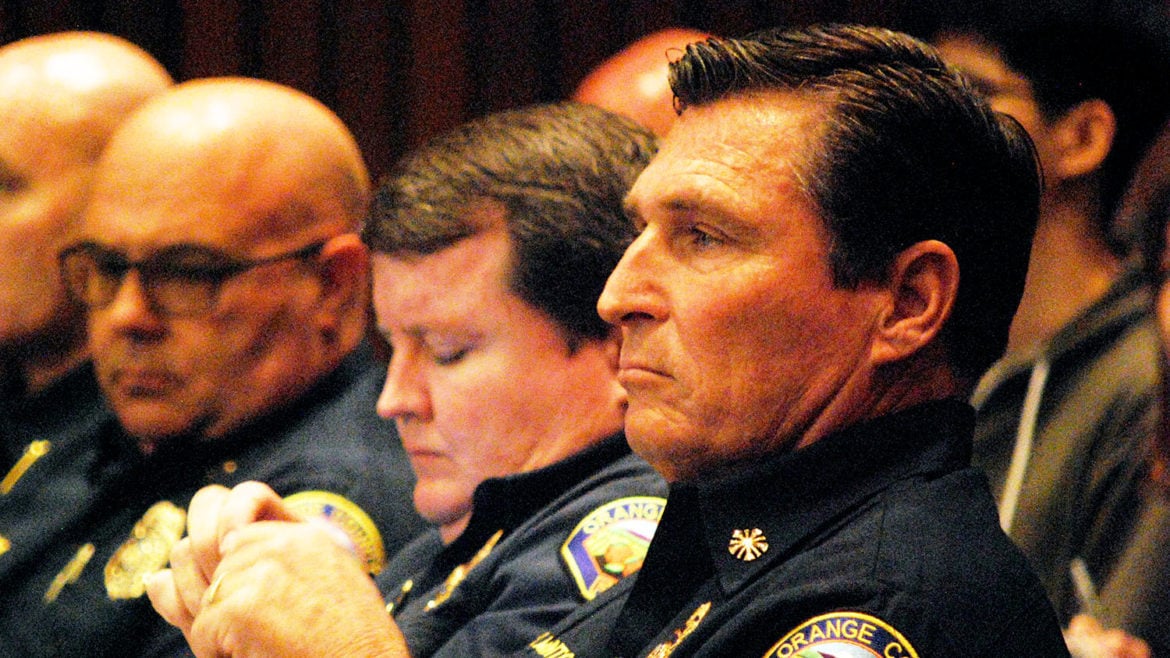 Patrick McIntosh (right), the then-interim chief of the Orange County Fire Authority, waits to speak about the Canyon Fire 2 response at the county Board of Supervisors' meeting Tuesday, Oct. 31, 2017.

If the Fire Authority had followed its own protocols – such as increasing staff  at  stations on the high fire risk “red flag” day and dispatching a full response to the first report of flames – the fire likely would have been significantly curtailed, according to the county report by Steve Danley, a former performance audit director at the county.

“There were so many mistakes here,” said Supervisor Shawn Nelson at Tuesday’s Board of Supervisors meeting, where the investigation’s findings were discussed.

“I just don’t understand the total departure from all of your protocol.”

The Anaheim Hills fire broke out the morning of Oct. 9 and raged for four days across 9,200 acres. It destroyed 15 homes and damaged or destroyed about 65 other structures.

Over 1,000 firefighters – from as far away as Santa Barbara and near the U.S.-Mexico border – battled the flames. Four firefighters suffered minor injuries.

Amid Tuesday’s criticisms, the Fire Authority’s acting chief acknowledged numerous protocol breaches in the initial response to the fire reports and said his staff were fixing them.

The “initial 71 minutes” after the first reports of flames “did not go well. Protocol was not followed,” said Dave Anderson, the acting fire chief.

“We’ve broken your trust,” he told Nelson. “We recognize that we’re gonna have to make changes – not just say it, but do it and show it – in order to earn that trust back.”

Anderson said the Fire Authority is determined to “never make the same mistakes again,” and has made numerous improvements to its 9-1-1 dispatch center, training of dispatchers, and deployment of Sheriff’s Department helicopters that can drop water.

“The men and women of OCFA…embrace the changes ahead and we’ll do our part to learn and grow from the experience,” Anderson said.

Said Nelson, “I appreciate the statement. But frankly, the statement is almost exactly what people would expect out of a bureaucracy: ‘Hey, lessons learned, we’re gonna do better, [we’ve] got a lot to take care of.’

“How can that ever happen? And since it did, how is the whole place and the command staff that let this happen not all in significant re-evaluation?” Nelson added, raising his voice. “The response is just so divorced from reality.”

Supervisor Todd Spitzer alleged the fire agency’s command staff “hid” video footage from the morning of the fire, which Danley later analyzed and said showed the fire would have been significantly curtailed if the proper protocols had been followed from the beginning.

The video was recorded at 9:13 a.m., about 40 minutes after the first call came in at 8:32, which was not treated seriously by the Fire Authority.

The video shows that 40 minutes after the first call came in, the fire was still in its “early stages” and the flames were still contained within the canyon where they originated.

Based on the video and the rest of his investigation, Danley concluded the authority should have had significant crews fighting the flames by that point, and that if they had followed protocol it would have given firefighters “a significantly better chance” at reducing the fire’s harm to the public.

The video has been in the Fire Authority’s possession for months, but did not end up in the authority’s “independent” investigation report.

“I believe unequivocally…that they suppressed [the video] on purpose” from the Fire Authority’s “independent” investigation panel, Spitzer said Tuesday.

Anderson acknowledged the 9:13 a.m. video “is very important,” but that it was not kept from the county or Fire Authority’s investigators. “We cooperated entirely with every aspect” of the investigations, he said.

While the Fire Authority apparently did provide the footage to Danley months ago, Spitzer said OCFA’s own “independent” investigation did not mention the footage, much less how it showed the fire would have been curtailed if protocols were actually followed.

“I have so much respect [for the firefighters]. I think everyone wearing the uniform deserves better,” Nelson said. “It’s embarrassing.”

“We’re doing an administrative disciplinary process,” Anderson said. “When we learn why – was it misconduct, was it inattention, was it intentional…we’re gonna hold our folks accountable.”

Fire Authority executives waited several days in October to answer key questions about the fire response, before acknowledging mistakes were made.

Ultimately, audio was released in late October showing a 9-1-1 dispatcher with the Fire Authority misrepresented and downplayed the early 8:32 a.m. report of flames when passing it on to a fire station.

At the Oct. 31 supervisors’ meeting, Nelson questioned why it took the Fire Authority over two weeks to acknowledge the 8:32 a.m. report of flames, suggesting its officials only did so after he went public with concerns.