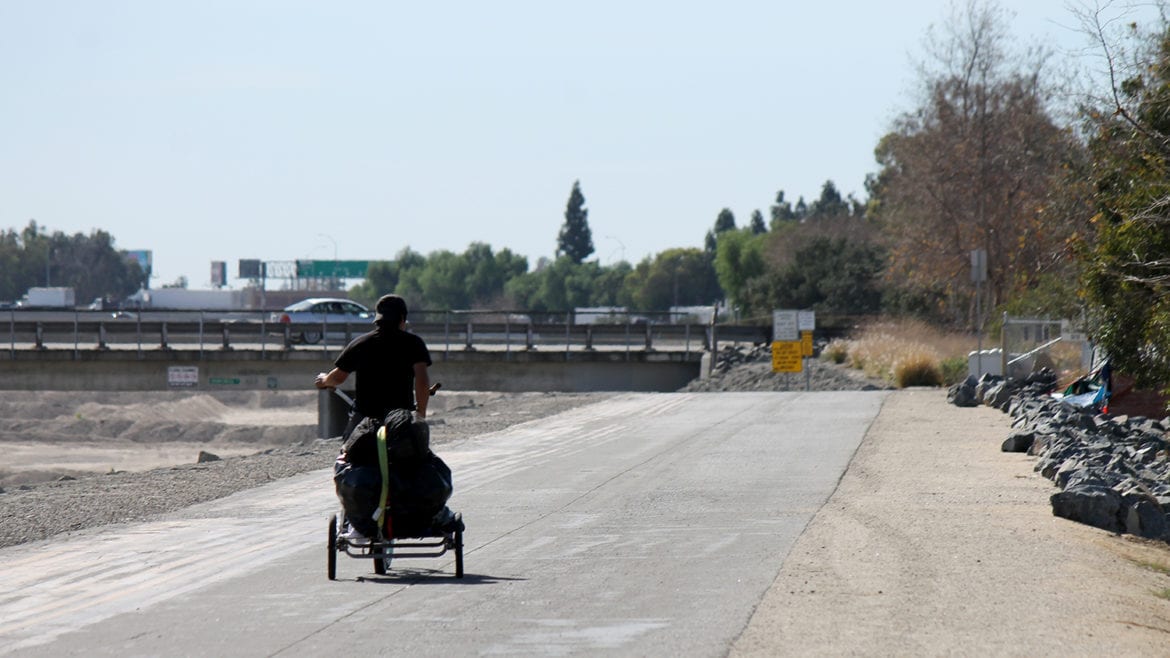 A man hauls his stuff behind his bike on a makeshift tow cart. Bicycles are the primary mode of transportation for homeless on the Santa Ana riverbed. Jan. 29, 2018

“Ultimately, Santa Ana seeks…a fair and equitable distribution of responsibilities for homeless services among the County and all Orange County cities, as well as reimbursement and sustained funding by the County for Santa Ana’s decades long efforts to relieve homelessness in Orange County,” reads the city’s court filing.

“The recent actions of the County and [the other] cities show that such a result is not likely to be voluntarily achieved.”

The April 26 filing follows through on the City Council’s decision two days earlier to try to include all Orange County cities in the federal suit.

The city’s request asks for a court order requiring the 33 other cities and the county government “to establish city-specific and regional solutions to homeless issues or comply with state law as required.” And the city is seeking reimbursement from the county government for the city’s past and future costs spent addressing homelessness.

In its 27-page filing, the city said it expects to spend over $17 million this year, “at the expense of core services to Santa Ana residents.”

The court request says the other 33 cities and the county “must work collaboratively to resolve the current homeless crisis and to avert another. The communal goal must be a sustainable, long-term plan that is both city-specific and regional in nature.

“There must be a basic willingness to seriously consider, or at least not oppose, the provision of low barrier shelters and permanent supportive housing by [the county and other cities] as well as the provision of social services by city representatives or third parties, all in a dignified and humane manner.”

Irvine Mayor Don Wagner, who since April 3 has been leading south county mayors in shelter discussions that so far have not led to a viable site, said Santa Ana’s latest move will probably set back the effort to create new shelters.

“With [Santa Ana’s court filing], it may just be that it takes all of the oxygen out of the room…and we may have to deal with the law and the lawsuit, instead of productive efforts at finding a solution,” Wagner said in an interview Friday evening.

“I do worry that it’s going to get in the way of the cooperative approach. It’s going to give Carter jurisdiction, but at the end of the day the complaint is so absurd,” and the cities may get “sidetracked” into a legal battle over the viability of it, he said.

Wagner said the south county mayors still plan to meet Thursday, May 10, to discuss their next steps in finding additional shelter beds.

Currently, the defendants in the federal civil rights lawsuits are the county government and four cities. Santa Ana officials said their new action is intended to expand Carter’s jurisdiction to all cities in Orange County, including south county mayors who have thus far not publicly identified any potential shelter sites within their cities.

Santa Ana’s request to add the cities, if approved by Carter, could grant the judge the ability to follow through on his warnings about banning enforcement of anti-camping laws if city officials, particularly south county mayors and city managers, don’t make progress in picking one or more shelter locations. Carter told city officials on April 3 he’d prefer they collaborate on shelter solutions.

At that April 3 court meeting, which was attended by mayors and city managers from across the county, Carter said Santa Ana has done its fair share to host homeless shelters and services, and called on other parts of Orange County to step up with providing shelter based on their “proportional” share.

At the end of that hearing, Carter thanked the mayors and city managers for being there, and said they were not in the lawsuit at the present time but that “it’s one page away.”

Carter asked south county mayors to report back to him soon after the mayors’ April 19 meeting whether they’ve identified a shelter location. The mayors recommended a site along rural Santiago Canyon Road outside their cities, which ultimately was rejected by county supervisors, who have jurisdiction over the property.

At the April 3 court meeting, Carter said if south county mayors didn’t find a location for a new shelter, he would “follow the law” in the U.S. 9th Circuit’s Jones decision and ban cities from enforcing anti-camping laws against homeless people until adequate shelter capacity was available. The judge said he preferred not to do that, and encouraged the cities to collaborate on creating additional shelter beds in south county to reduce overcrowding at existing shelters.

The way Santa Ana structured its court filing, Wagner said he doubts Carter would be able to apply the Jones decision – which centered on allegations of cruel and unusual punishment against homeless people – to the cities Santa Ana wants to add.

Instead of focusing on alleged harms against homeless people, Santa Ana’s filing alleges harm to the city government and Santa Ana residents’ ability to receive services, through the city’s monetary expenses and staff time spent dealing with homelessness.

Wagner said in a Thursday text to Voice of OC he was “aware of at least two cities in South County (not yet my place to say which) that have or soon will have separate special [legal] counsel to fight this, and I expect more to do the same.”

“Judge Carter, to his great credit and based on his years of experience, knew how to keep pressure on but still allow us to get to a reasonable solution. Santa Ana threatens to blow up his careful work.”

Wagner works as an attorney at Best Best & Krieger, the same law firm as Santa Ana’s city attorney, Sonia Carvalho. Carvalho said last week she recused herself from being involved in the Santa Ana legal filings, due to the firm’s representation of several of the cities Santa Ana is suing.

According to the Santa Ana court complaint, “social, mental health, and other services provided to homeless individuals by the County of Orange and entities contracting with the County, along with their funding levels, are woefully inadequate to address the instant and ongoing crisis of homelessness.”

“The Orange County Board of Supervisors has publicly admitted that it has failed to spend tens of millions of dollars available for homeless housing and services for the homeless population in the County,” the complaint reads.

The other 33 cities and the county have 21 days to respond to Santa Ana’s filing after they’re served with the paperwork, according to the court documents Santa Ana filed.

An error in Santa Ana’s paperwork delayed the city’s ability to serve the documents on the other cities and start the 21-day clock.

City officials initially expected to be able to deliver the court documents to the 33 cities and the county in the roughly two days after the Thursday evening submission to the court.

But on Friday, the court told the city it had a mistake that needed to be fixed before the paperwork could be sent to the other cities.

“The defendant’s name must appear in the ‘To:’ section of the summons,” the court wrote in its notice to Santa Ana. The “summons” is Santa Ana’s requested order requiring the other cities to respond in writing to its complaint.

“The summons cannot be issued until this defect has been corrected,” the court clerk wrote. “Please correct the defect and re–file your summons request.”

As of Sunday night, city officials had not served the summons on the cities and were awaiting the court’s approval of the document before doing so.

After the most recent shelter proposal – at the former Silverado Elementary School – fell apart, the discussion among officials turned to possibly creating a series of smaller shelters in south county and elsewhere, until longer-term housing solutions are available for homeless people.

The smaller-shelter idea was put forward by Lake Forest Mayor Jim Gardner and residents of the rural canyon areas, and seemed to gain traction last week from Supervisor Lisa Bartlett, who represents about three-quarters of south county residents.

“A hundred years experience with this [large congregate shelter] model, [and] working with the mentally ill and the developmentally disabled, demonstrate that this model is inherently flawed,” said Gardner, who has a Ph.D in clinical psychology, at last week’s supervisors meeting.

“The large congregate model presents problems of danger and anxiety to individuals who are already at risk. It isolates the homeless from the greater community, reinforcing their stigmatization and dehumanization, and making their transition even more difficult,” he added.

“The alternative is a distributed model in which small numbers of people are integrated into the broader community, and where each city addresses the problem given their numbers and their resources – and where the county, nonprofits, and private companies augment the services. Lake Forest stands ready to join such an endeavor.”

Santa Ana Councilman Juan Villegas, who made the motion in closed session for the City Council to initiate the new legal action, said he sees no problem with a so-called “scattered site” approach.

There currently is a 45-bed shelter for single homeless men and women in one south county city, Laguna Beach. The shelter, which officially is called the Alternative Sleeping Location and is operated by the nonprofit group Friendship Shelter, mostly is funded by the city general fund, along with federal grant dollars.

With a population of about 23,500 people, Laguna Beach has about one shelter bed for every 522 residents. If every south county city had shelter beds at the same rate as Laguna Beach, it would add about 1,500 shelter beds.

The maximum number of new south county shelter beds mentioned by Carter’s representative at the April 19 meeting of south county mayors was less than a third of that, or up to 400 beds, according to county officials.

[Click here to see a PDF showing the number of shelter beds each city would have if they were distributed proportionately based on population. Click here for a version in Excel format.]