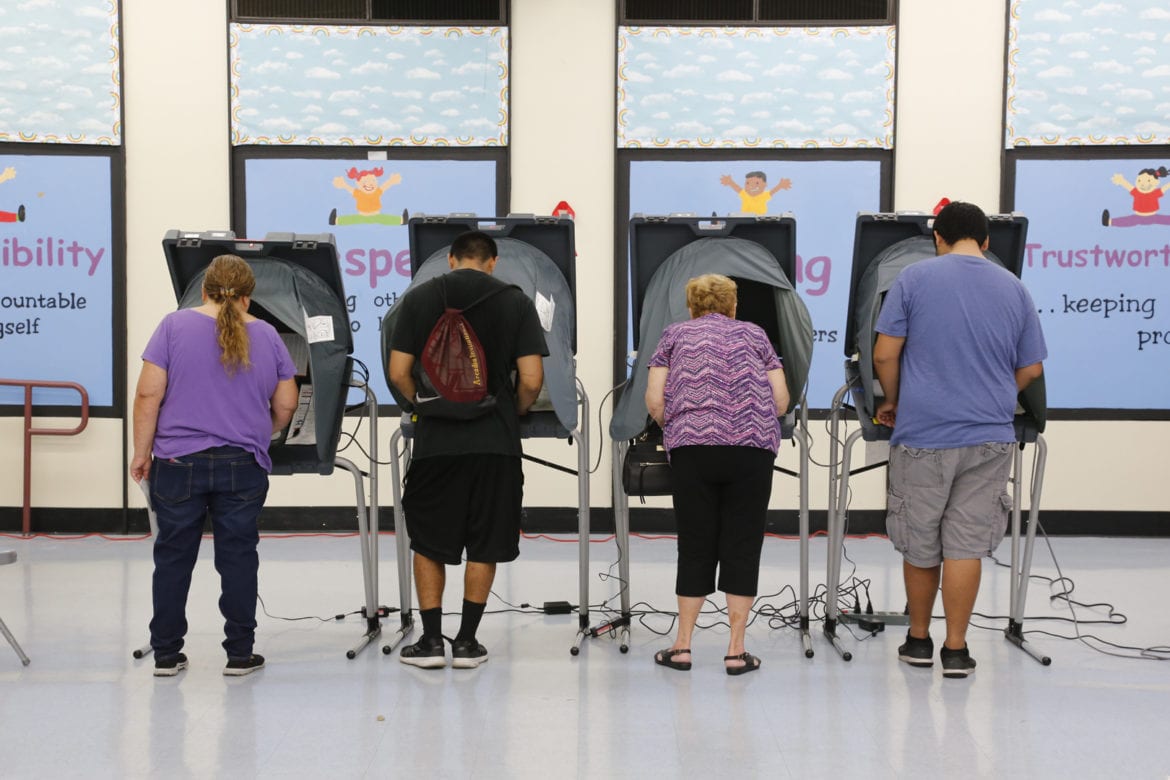 Santa Ana voters cast their ballots in the November 2016 election.

The Santa Ana City Council’s effort to have voters decide in time for the consequential November elections if council elections should switch to district-based voting apparently died Thursday, when an appeals court rejected the city’s last-ditch attempt to put the issue on the June ballot.

It appears the June measure is “not happening,” said Jorge Garcia, assistant to City Manager Raul Godinez, after the city’s attorneys reviewed the decision by the 4th District Court of Appeal.

“The petition for writ of mandate and request for an immediate stay are DENIED,” said the one-sentence ruling by justices Kathleen E. O’Leary, Raymond J. Ikola, and Thomas M. Goethals.

City staff and attorneys are waiting for direction from the City Council, which has its next regular meeting Tuesday. But that meeting is after the Monday deadline for county officials to send the June ballots to the printer.

“We certainly are disappointed that we can’t [go to the voters] in June,” Councilman Vicente Sarmiento, who supports the June measure and is the only lawyer on the City Council, said in an interview with Voice of OC.

That seems to end the ability to have district elections in place for November, he said, because state law only allows charter changes in cities like Santa Ana to go to voters at the June primary and November general elections.

“I am very, very disappointed, because we had a mayor that went rogue and thwarted the will of the people, and acted as a Third World dictator, and abused his authority, and unfortunately found a way to prevent…a majority of the council from moving forward with public policy that would have been decided by the voters,” Sarmiento said. “It’s a bad day for democracy.”

Pulido did not return to a phone call and text request for comment about Thursday morning’s ruling, Sarmiento’s criticisms, or additional critiques against him from Councilman David Benavides.

The mayor’s attorney said it was Sarmiento and his allies who behaved improperly.

Pulido refused to sign the paperwork last month after the City Council voted 4-to-3 to put the issue on the June ballot.  He cited alleged improprieties and contended the measure required the votes of five council members to place it on the ballot.

A judge last week ordered Pulido to sign the paperwork, saying the mayor should have gone to the courts to challenge the council’s action, instead of “acting as judge, jury and executioner.”

Benavides, who supported the June measure, said Pulido had blocked the right of voters to make the decision.

“Unfortunately, Miguel Pulido has decided to become an obstructionist to democracy and stand in the way, and object to giving certain community groups – including the Vietnamese community – the opportunity to elect a representative for their district,” Benavides said.

The November election is considered highly consequential, because three City Council seats will be vacant, leading to the largest turnover on the council in six years.

The largest fundraising reported to date has been by the city’s police union, which spent more than half of all campaign money in the most recent Santa Ana election in 2016.

The police union started the 2018 election year with about three quarters of all Santa Ana campaign money in the bank, and is on track to have over $675,000 to spend on November’s City Council election.

Supporters of district elections say that system of electing city council members would be fairer to candidates who aren’t backed by the city’s police union and other groups that can spend large amounts of campaign money. Council members currently are elected “at large,” meaning they run citywide.

Opponents say district elections would lead to less accountability by restricting each voter’s choices to candidates running just in their district, that council members approved the measure illegally, and that it makes more sense to have voters decide in November when more people vote, not June.

The appellate ruling Thursday came amid a weeks-long court battle between Pulido and a four-member majority of the council. The mayor still has an appeal and a lawsuit against the city over the measure that have yet to go to a court hearing.

It all centers around the City Council’s March 6 vote to ask voters in the June primary election whether to change the city’s at-large City Council voting system to district-based elections. Voter approval would be required because it involves changing the city charter.

In the days after the council vote, and facing a March 9 deadline to get the papers to the county elections office, Pulido refused to sign the three City Council resolutions that would put it on the ballot, saying he believed it required yes votes from five City Council members to approve it.

County Registrar of Voters Neal Kelley rejected the ballot paperwork, saying it was incomplete, which effectively killed the ballot measure unless a court orders it on to the ballot.

The city sued the mayor, and Judge Glenn R. Salter last Friday ordered Pulido to sign the documents, but declined to order the county to put the measure on the June ballot. Salter said it was because the documents “had not been attested to by the city clerk.”

The city filed an emergency appeal late Wednesday, saying Salter’s ruling “has the effect of allowing the Mayor to unilaterally veto…the will of the people to decide how elections for their local legislators are conducted.”

County elections officials had asked for a final court ruling by 5 p.m. Friday so they wouldn’t be delayed in sending ballot materials to the printer by their Monday deadline. State law requires the first batch of ballots, to military and overseas voters, to be mailed by April 21.

Thursday’s ruling seemed to leave no viable options for the City Council to get district elections in place for the November City Council election.

The city could have tried asking the California Supreme Court to put the measure on the ballot. But attorneys familiar with the case said it was unlikely the Supreme Court would rule before the county’s 5 p.m. Friday deadline.

The city could have tried to ask Salter to issue a new order, based on the election interference arguments, to try to put the measure on the ballot. But the city did not file a request for that after his ruling last Friday.

And the city could have attempted to put the measure before voters on its own through a city-run election during the June primary. But state law appears to prohibit that because the election now is less than 88 days away.

City Attorney Sonia Carvalho and the city’s outside attorneys on the case didn’t respond to an email asking for confirmation that they see no pathway for implementing district elections in time for the November 2018 City Council election. The outside attorneys are Saskia Asamura, Peter Pierce, and Stephen Lee, with the law firm Richards, Watson & Gershon.

Sarmiento said Pulido and his supporters succeeded in delaying the process until it was too late.

“They just ran the clock out on us…that was the strategy here,” Sarmiento said. “I simply think they wanted to prolong” this, he said, until it died a “slow death.”

If Pulido does succeed at blocking the ballot measure, Benavides said, he and others will “tell the residents of Santa Ana that they will not have the opportunity to elect their representative of choice because the mayor has stood in the way.”