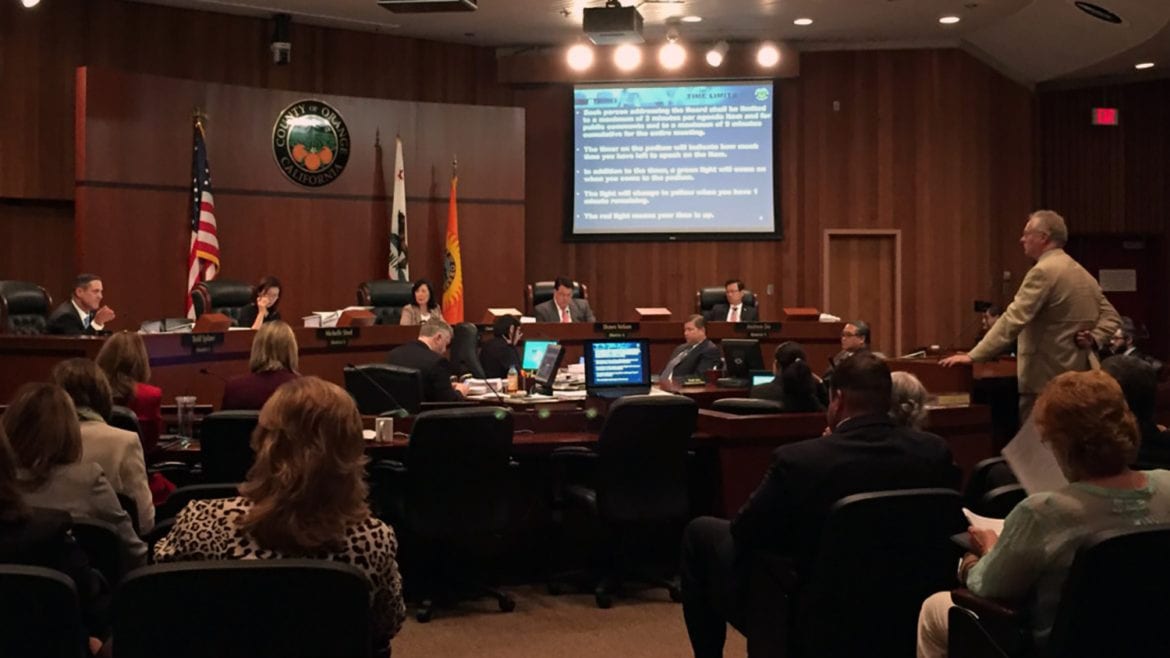 When the County of Orange announced it had run out of emergency shelter space last week – amidst a tense, month long eviction of the Santa Ana riverbed homeless encampments that landed officials in federal court – County Supervisors’ Chairman Andrew Do called for an emergency meeting to plot options.

Do could only round up one of his four colleagues.

He gave them four days notice, for a crisis affecting nearly every county resident’s immediate quality of life.

And the majority of the Orange County Board of Supervisors scored a no show.

Unable to secure a quorum – and without cameras rolling – Do and Supervisor Shawn Nelson sat there last Monday afternoon on the public dais in a sad, public venting of their own frustrations in front of the press corps, bemoaning their board’s inability to convince local cities to accept hastily put together plans for homeless shelters.

Supervisors have officially tapped out.

They want a federal judge and the cities to figure out the homeless crisis themselves.

“Anybody that wants to stick their neck out for this issue is gonna have nothing to show for it but a cut-off head,” said Nelson at the meeting. “There’s no reward for even trying to get involved in this.”

As an example, Nelson pointed to Supervisor Lisa Bartlett, who initially opposed a rushed plan last week to put shelters in cities, such as Laguna Niguel, with no outreach or planning.

Bartlett switched her vote to a yes after a brief, confused afternoon dais discussion and her city leaders went nuclear.

“Lisa stuck her neck out and made a tough vote. She came within an inch of getting recalled. Why? Because she just acknowledges there’s a problem, and wants to participate in the discussion. And the response is ‘how dare you?’ ” Nelson said.

Yes, there is plenty of NIMBYISM in the reactions of many city leaders asked to shoulder homeless services.

But how can you blame city leaders, who are entrusted with protecting city resident’s quality of life, for having a lack of faith in a bunch of part-time county leaders who can’t fashion together credible strategies or build public consensus around any sort of policy lift beyond cheap, taxpayer-financed, election-year mailers advertising county pet fairs and fishing derbies.

City leaders know this band of part-time county supervisors are way too busy campaigning for their next office and won’t be around to deal with the consequences of their hasty planning efforts.

Consider the motel owners – who according to County CEO Frank Kim are likely to file claims – that participated in the county plan to house homeless in motels. Many apparently had rooms destroyed by people who weren’t ready for motel rooms on their own.

What about the county’s hoarding of hundreds of millions in federal and state dollars slated for tackling homelessness?

How are city leaders to have confidence in county supervisors who only work part-time hours.

Just like Monday’s missed hearing, these county leaders have been one big no show when it comes to big challenges.

U.S. District Judge David O. Carter, who is overseeing the federal lawsuit against the hasty eviction plan executed by the County of Orange of riverbed homeless, all but called out the county’s lackluster performance since landing in his court.

“This county has been in a crisis situation from the time the court got this case,” Carter said. “This county’s structure has been deplete, and I think only recently has there been a concerted and good faith effort to catch up with decades of neglect,” Carter said.

Now, lets do some math on what these part-timers cost taxpayers.

For these big political brains, we pay a nice annual salary of about $150,000.

Add to that a Cadillac health care package along with a government pension and a 401K plan.

Don’t forget the free cars and car allowance ($750 a month).

Now, that’s just the supervisors themselves.

On top of their benefit packages, taxpayers also get to fund massive office staffs – $1 million each district – for basically a bunch of campaign aides.

County supervisors used to meet every week. In LA County, board meetings extend out over three days each week with full hearings on issues.

Orange County supervisors cut their schedule in half in recent years, meeting on average about the same frequency as part-time city council members.

Now, consider these are five Republicans in charge of a $6 billion bureaucracy.

Yet rarely do they push back on the bureaucracy.

In fact, most of the time their answer to a crisis is to either outsource or hire another expensive and unaccountable bureaucrat, like the Office of Independent Review.

Consider that more than a year ago, supervisors unveiled their own, six-figure Homelessness Czar, who was supposed to organize the county’s departments and offer a one-stop shop of answers for homelessness.

Yet that fancy, expensive post didn’t seem to help one bit when county officials landed in federal court over their lame response to homelessness.

Ask yourself how much attention do county supervisors pay to the annual budget, as opposed to contract procurement – which is tied to campaign contributions from vendors?

After watching city and county governments work for decades, I have concluded that you don’t want politicians anywhere near contract procurement.

With a county CEO, a board needs to focus on the budget.

Yet keeping an eye on the budget has never been supervisors’ strong suit.

Recall that Orange County supervisors triggered the nation’s then-biggest municipal bankruptcy back in 1994.

And when they rushed to refinance in 2006, county supervisors quietly triggered another financial disaster by losing hundreds of millions in special state tax set-asides that were once set in stone as long as Wall Street bondholders were being paid under the original deal terms.

Yet this year, they’ll be sending all of us taxpayer-funded mailers celebrating the last payments of the bankruptcy debt through the refinancing – without disclosing the problem they created and buried.

When Gov. Jerry Brown’s budget staff discovered the glitch back in 2012 and took back the money, Orange County Supervisors were at their most policy creative when they raided funds designated for community colleges, which triggered a state lawsuit and the ire of local community college districts.

Supervisors’ scheme eventually lost in court and they worked out a quiet payment plan to the state.

Beyond those financial disasters, I ask where’s the policy innovation?

The only real innovation this generation of supervisors has come up with is turning Orange County into a charter county about a decade ago – done at the time to enable a smooth political transition for candidates running between county supervisor and state assembly seats.

Yet now that Orange County is a charter county, supervisors can easily take the next step and put up an initiative to make themselves part-timers, just like many state legislatures in places like Texas.

Who knows, maybe the millions saved from paying obsolete county supervisors could instead be redirected to a regional homeless services Joint Powers Authority that could simply take federal and state funds and deliver direct services.

We should be able to get really smart professionals from our community to serve as county supervisors and just convene on a quarterly basis to approve an operating budget and any fiscal adjustments.

The budget is where supervisors can set strategy and then earn their part-time pay by holding bureaucrats accountable during quarterly fiscal check-ins.

This current system only seems to encourage expensive politicians, who by their own admission can’t solve basic regional issues — like the needs of several thousand homeless individuals out of a county of three million people.