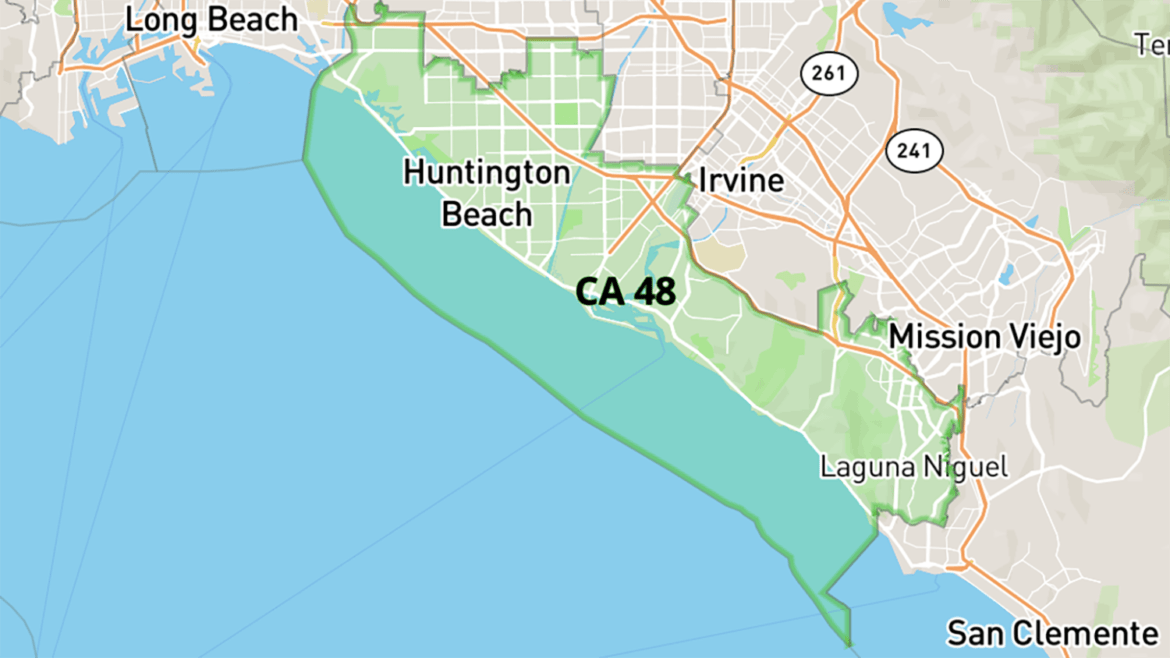 Rep. Dana Rohrabacher (R-Costa Mesa) and either Republican Scott Baugh or one of two Democrats are likely to advance past the June 5 primary, local election experts say.

“I would presume that Rohrabacher would come in number one. It’s a tight race for number two between Scott Baugh, (Democrat) Hans Keirstead and (Democrat) Harley Rouda. It can go in many directions,” said Chapman University professor and elections expert Mike Moodian.

Since none of the Democrats have held elected office, it could reduce the chances of the seat being flipped in November, added UCI professor and elections expert Mark Petracca.

“I think a Democrat will make it through the primary to November and that Democrat is likely to be Rouda. The problem the Democrats have is that they have no one in the race who has held elected office before,” Petracca wrote in an email.

“Dana’s (Rohrabacher) won that race, what, 15 times?” Smoller said. “Incumbency is just such a powerful thing (with voters).”

The Democratic Congressional Campaign Committee (DCCC), along with numerous other Democrat organizations, are targeting the 48th Congressional District, along with three others in Orange County,  as part of their nationwide attempt to win the 24 seats needed to gain control the 435-member House of Representatives.

Republicans make up a majority of district voters, but Hillary Clinton won there in her 2016 presidential campaign. Rohrabacher has the name identification advantage of an incumbent who has served in Congress for three decades, but opponents are criticizing him for his support of Russian President Vladimir Putin and his backing of legalized marijuana, among other issues.

While there are 15 candidates on the 48th Congressional District ballot — including eight Democrats, five Republicans, one Libertarian and one no party preference — some have dropped out to endorse other candidates.

California operates under a top-two primary system, also known as jungle primaries, in which the two candidates who receive the most votes advance to the November general elections, regardless of political party.

In an effort to avoid a party shutout, at least three Democrats—Rachel Payne, Michael Kotick and Laura Oatman —dropped out after the March 9 candidate filing deadline, which means their names still will appear on the ballot. Kotick and Oatman have endorsed Rouda while Payne hasn’t endorsed anyone.

Republican candidate Stelian Onufrei also dropped out of the race in April — after the filing deadline — and endorsed Baugh.

The candidates who dropped out “are still going to take votes away from other candidates,” Moodian said.  “All these Democrats could split the vote and then it would be Baugh and Rohrabacher (in November).”

The Federal Elections Commission website campaign finance numbers only cover up to March 31 and the next deadline for a quarterly campaign finance filing is June 15, 10 days after California’s primary election.

Rouda, a businessman and lawyer from a technology firm that specializes in real estate data, led fundraising in the district at nearly $1.8 million, as of two months ago. He’s been endorsed by five U.S. representatives including Lou Correa (D-Santa Ana) and Linda Sanchez (D-Lakewood). He’s also been endorsed by the local chapter of Indivisible 48, a grassroots Democratic organization looking to unseat Republican incumbents and has been listed on the DCCC’s “Red to Blue” program.

Rohrabacher as of the end of March had raised a little less than Rouda, nearly $1.5 million.

Keirstead, a medical scientist in the stem cell research field and CEO of a biomedical research company, raised almost $1.3 million. He’s been endorsed by three Congressmen, two from California and one  from Illinois and by the California Democratic Party.

Omar Siddiqui, a lawyer who works as a consultant for the FBI on national security issues, raised $933,000. His website doesn’t list any endorsements. He used to live in Fullerton, outside the district, and told the OC Register last year he didn’t want to run against Rep. Ed Royce (R-Fullerton), before Royce’s January retirement announcement. According to the county Registrar of Voters, in January Siddiqui changed his registration, showing he now lives in Costa Mesa, inside the 48th District.

Baugh, who didn’t enter the race until March 9, hours before the filing deadline, according to the San Diego Union Tribune, had raised only $317,000 as of the end of that month. He’s been endorsed by State Senators John Moorlach (R-Costa Mesa) and Pat Bates (R-Laguna Niguel).

The 48th Congressional District is home to roughly 387,000 registered voters as of May 21, according to registration data on the OC Registrar of Voters’ website. Republicans hold the edge at 40 percent of voters, followed by Democrats at nearly 30 percent and no party preference voters are at nearly 25 percent.

“The general rule is with that type of (voter) registration is the incumbent wins,” Smoller said.

All three experts agree Rohrabacher will likely take the number one spot in the June 5 primary election because of his name recognition gained during his nearly 30-year incumbency. His opponents challenge his support of President Donald Trump, who lost in the district to Hillary Clinton, as well as his ties to Russian President Vladimir Putin, WikiLeaks founder Julian Assange, pro-Russia views and his push to legalize weed. He’s even recalled a drunken arm wrestling match with Putin that happened over 20 years ago, which Rohrabacher said he lost.

“I don’t think Rohrabacher is sufficiently damaged to be knocked out,” Smoller said.

“Rohrabacher has been in office for decades now. There are voters who are going to vote in the primary and general elections and these people have had Rohrabacher be in office their entire lives,” Moodian said.

Voter turnout for the 2016 primary election, a presidential year, was high at 44 percent, compared to previous primaries. In the 2014 off-year primary election, just over 24 percent of registered voters participated.

The historically low-voter turnout for primary elections will help Republicans, since GOP voters tend to turn out at a higher rate than Democrats during non-presidential primary elections, Petracca said.

“On one hand, you have Dana (Rohrabacher) who’s closely aligned with Trump, who’s very much disliked in this county and Hillary (Clinton) took the district, but on the other hand you have a primary that has low turn out — about 30 percent — so that definitely favors Republicans,” Smoller said.

Moodian said Baugh is using some of Rohrabacher’s ties to Russia and marijuana to his advantage.

Baugh released a television ad attacking Rohrabacher’s legislative record, his stance on marijuana and relationship with Russia. He paid KTTV-Fox $700 to run the ad during the 5 p.m. news hour Monday through Friday and during a Saturday evening from May 14-20, according to legally required public disclosures.

Meanwhile, Moodian said the California Democratic Party might have endorsed Keirstead too early at its state convention in February.

“My sense is, from just talking to people out in the field, Rouda is gaining all kinds of ground-level support. So I think the Democrats may have shot themselves in the foot with a state endorsement when there was some very competitive candidates,” Moodian said.

The DCCC also paid nearly $18,000 to run TV commercials for Rouda that began Tuesday and will continue until the primary election. The commercials will air on weekdays during morning, afternoon and evening news hours.

If two Democrats in the gubernatorial race advance to November, that could turn off many Republican voters who may not show up to the polls, Moodian said.

“If it’s Gavin Newsom running against Antonio Villaraigosa for governor, some Republicans could not show up for elections in November, so that could help the Democrats,” Moodian said. “Once we have two candidates, Rohrabacher does have some vulnerabilities.”

Petracca said the voter registration difference between the Democrats and Republicans is still too big to upset Rohrabacher and turn the district blue.

“With the top two primary, it’s actually possible that come November, most of the statewide elections will pit two Democrats against each other.  That is a possible outcome and it won’t help Republican turnout which tends to be higher… in midterms when compared to Democratic turnout,” Petracca wrote. “If the 48th (Congressional District) had a closer split between the Democrats and Republicans this might give Rouda something of an advantage over Rohrabacher. But the party split isn’t close at all, it’s still more than 10 points.”

Moodian said while Rohrabacher is the favorite, there’s a lot of time between June and November.

“I would say Rohrabacher is the favorite, if I were to place odds on the race … as a favorite in the primary and a favorite to win it in November. With that said, November is a long time from now. We have a President who is controversial, we don’t know what’s going to happen between now and November,” Moodian said.