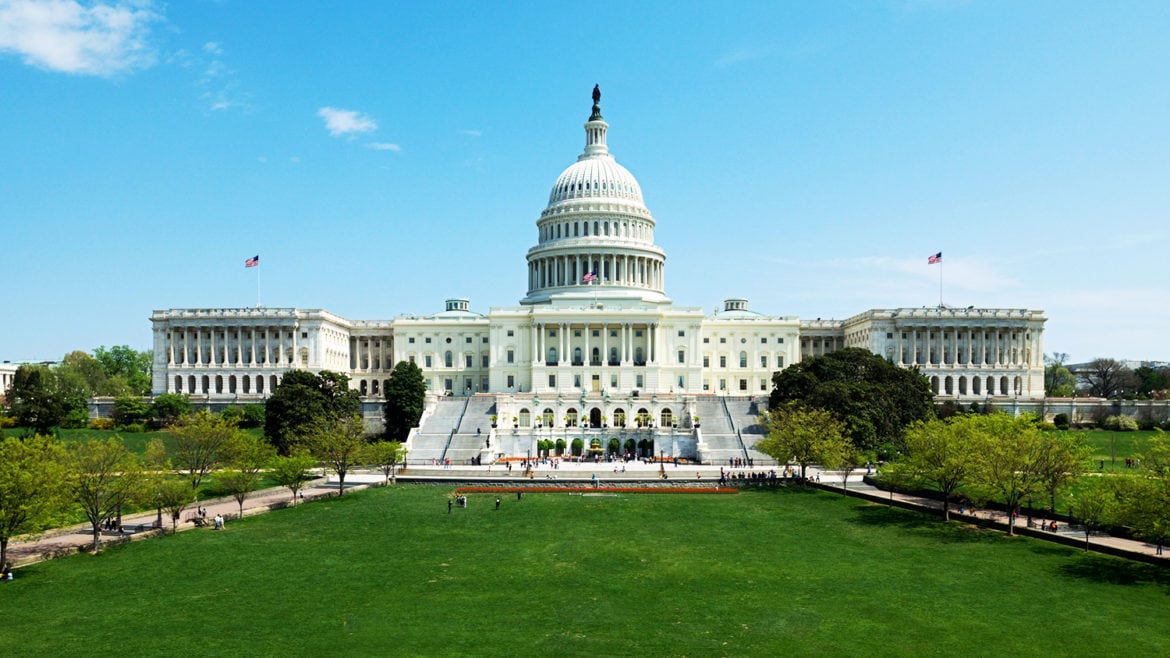 ARCHITECT OF THE CAPITOL, aoc.gov

Four Orange County Congressional Districts that pundits predict will be competitive races in November’s national election fight to control the House of Representatives have been flooded with 32 candidates as Democrats target the Republican-held seats and gear up for the June primary.

“It’s unbelievable, the record breaking numbers of candidates,” Orange County Democratic Party Chairwoman Fran Sdao said. “We typically have a hard time finding a Democrat to run, so this year we have the opposite problem.”

Democrats need to take at least 24 House seats throughout the country in order to win control. Currently, the House has 239 Republicans, 193 Democrats and three vacancies. The June 5 primary will narrow the Orange County field to the top two vote getters in each Congressional district, regardless of political party.

Real Clear Politics Senior Elections Analyst Sean Trende said the increasing Latino vote could help the Democrats this year, along with a general shift away from Republicans since the election of President Donald Trump.

“Part of it is the increasing Hispanic presence in Orange County and part of it is upper income whites, especially in the age of Trump, are drifting away from Republicans,” Trende said, adding that the voter shift is a national trend.

Real Clear Politics is a news website and aggregator which focuses on Federal policy, national elections and international news.

It was the first time a Democrat won the county’s overall presidential vote in 80 years when the county backed Democrat Franklin D. Roosevelt for president in 1936, the middle of the Great Depression.

But the flood of Democratic challengers in the county could hurt the party’s chance at winning the seats if the campaigns become aggressive and split the Democratic vote heading into the primaries, a problem which may linger into November, Trende said.

Still, it could be Trump’s job approval rating that might help Democrats win the House in 2018.

“With him (Trump) having his job approval 40 (percent) or below over his term, that typically causes the party in power to lose registration and support,” Trende said.

“Here we are in Orange County, a Republican county and our voter registration numbers have surged in the last several years. We’re down to about a 3 percent difference between registered Republicans and Democrats,” Sdao said in a phone interview.

Voters opting for no political party make up nearly 25 percent of the county’s roughly 1.5 million registered voters, according to the county Registrar of Voters statistics updated in December.

Traditionally, no political party voters have tended to support Republicans.

The Cook Report and Larry Sabato’s Crystal Ball classify the coastal 48th and south county’s 49th districts as tossups, while the south-central 25th district is lean Republican, giving the GOP a slight edge in the upcoming vote.

Both the Cook Report and Crystal Ball listed the north Orange County 39th district as leaning Republican until Monday when Rep. Ed Royce (R-Fullerton) announced he wouldn’t seek re-election.  After Royce’s announcement, the Cook Report reclassified the district as “leaning Democrat” while the Crystal Ball labeled the district as a “toss up.” Additionally, Rep. Dana Rohrabacher (R-Costa Mesa) is facing two Republican challengers for his 48th district seat.

The Cook Report and Crystal Ball are websites that regularly analyze presidential and competitive U.S. House and Senate races, along with Gubernatorial races. Both websites score competitive Congressional Districts based on potential voter leanings after analyzing the data of past elections.

Since 2012, voter turnout during primaries generally is around 25 percent for each of the four Congressional districts, but voter participation in three districts climbed over 40 percent and the 48th district had over half of its registered voters turnout for the 2016 primaries. Presidential election years, like 2016, generally draw more voters than off years, like this year. The final day for candidates to file is March 9.

The no preference voters could be a wildcard in the races because their numbers average about 25 percent of each district.

“A lot of them are young people who are new voters that don’t want to pick,” Sdao said, adding the Democrats are reaching out to them.

“This is not just unique to Orange County. This is happening all over the country,” Sdao said of the surge in voter turnout.

A Voice of OC analysis of voter data and trends goes back to 2012, following the statewide Congressional redistricting. All campaign finance data, unless otherwise noted, was collected up to Sept. 30, the most recent available information from the Federal Election Commission. 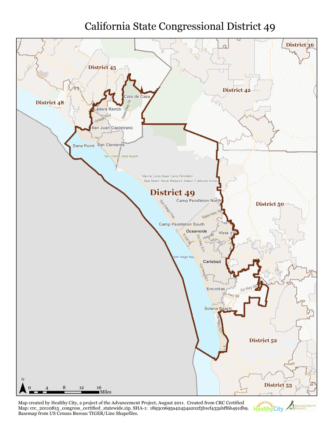 Both the Cook Report and the Crystal Ball consider the district a toss up. The district is home to nearly 400,000 registered voters, according to the February 2017 voter registration report from the California Secretary of State, the most recent available.

Rep. Darrell Issa (R-Vista) of the 49th Congressional District was reelected in 2016 by less than one percentage point. The district touches the most southern cities in the county, including San Juan Capistrano, Dana Point and San Clemente. The 49th also stretches down the west side of San Diego county, ending before La Jolla.

Like the other districts, 2016 saw a huge increase in voter turnout for the primary election in the 49th District. Just over 46 percent of voters turned out, compared to 29 percent in both 2014 and 2012. 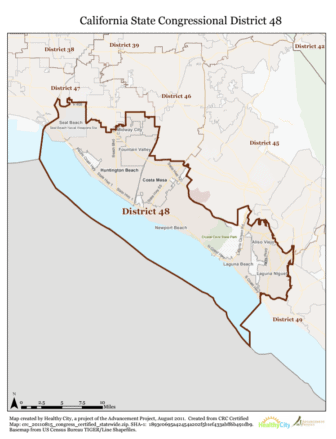 Like the southernmost district, the 48th is classified as a tossup by both the Crystal Ball and the Cook Report. But unlike Issa’s extremely close race, Rep. Dana Rohrabacher (R-Costa Mesa) had no problem defeating his opponent in 2016, winning by a nearly 17 point margin.

Although the district voted for Clinton in 2016, Republicans have 41 percent of the 406,000 registered voters. Democrats are clocking in at just under 30 percent, while no preference voters sit at 24 percent, according to the voter registration report.

The 48th had the least amount of money coming into the candidates out of the four districts so far.

Of the nine challengers for Rohrabacher’s House seat, five are Democrats, two are Republicans, one has no party affiliation and one is a Libertarian. Former Assemblyman Scott Baugh is one of the Republican challengers and raised only $139 through “other receipts” last year, but has nearly $550,000 left over from 2016. Baugh’s finance data reflects all of 2017. 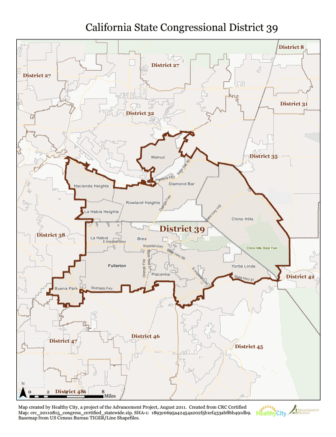 The 39th Congressional District was leaning Republican, making it a competitive race, according to the Cook Report and Larry Sabato’s Crystal Ball. After Royce’s retirement announcement Jan. 8, the Cook Report reclassified the district as “leaning Democrat” while the Crystal Ball labeled it a “toss up.”

Royce easily beat Democratic candidate Brett Murdock in 2016 with a margin of nearly 15 points, continuing a trend of winning by wide margins since 2012.

The 39th district consists of the most northern portion of Orange County from parts of Buena Park, Placentia and Anaheim Hills and contains all of Yorba Linda, Brea, La Habra and Fullerton while reaching north to parts of neighboring Los Angeles and San Bernardino counties.

While the district spans three different counties and has 367,000 registered voters, the bulk of voters are in Orange County at 227,000, according to the voter registration report.

The Republicans hold a slight edge in the district with 36 percent of the electorate, followed by the Democrats at 34 percent. Democrats in the 39th district have experienced slow voter  growth since 2012 when they had 32 percent, while Republicans show a decline from 40 percent the same year  No preference voters make up nearly 26 percent of the district, up from 23 percent in 2012.

The 39th District also experienced a big turnout for the 2016 primaries with nearly 42 percent of the electorate voting. The 2014 off-year primary had far less participation with just under 20 percent of voters showing up to the polls and the 2012 presidential year had a slightly better turnout at 25 percent.

While there’s eight challengers for Royce’s seat, two have yet to raise any money. Royce had the biggest war chest by far with $3.4 million on hand and managed to raise $1.6 million in 2017. He spent over $1 million between last January and September.

Democratic Challenger Andy Thorburn had the biggest war chest of the challengers, having loaned himself $2 million. He still has $1.9 million on hand.

Outside of one independent candidate and a no-party candidate, all challengers are Democrats. 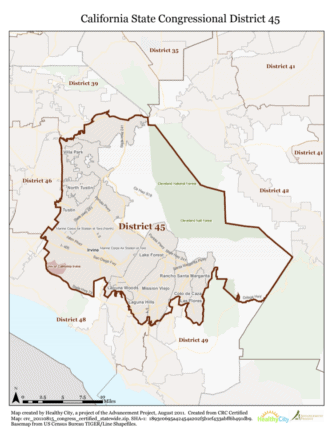 According to the Crystal Ball and the Cook Report, the 45th district leans Republican. Like Rohrabacher, Rep. Mimi Walters (R-Irvine) enjoyed a landslide, 17-point win over her opponent in 2016. There are at least six Democratic challengers gunning for the Walter’s seat.

Like the other three districts, the Republicans hold the the largest share of the electorate at just under 40 percent, while Democrats hover at just over 30 percent of the 412,000 registered voters, according to the voter registration report. No preference voters account for 25 percent of the district.

The data shows a shift in voting attitudes and party affiliation could be happening in the 45th District. In 2012, Republicans made up nearly 45 percent of the electorate, while Democrats had just under 28 percent. The no preference voters were at just over 23 percent.

As with nearly every district in the state in 2016, the 45th district had a surge in voter participation for the primary election when 43 percent of the registered voters showed up in the polls. In 2014 the district had 23 percent of voters show up and 2012 had just over 25 percent.