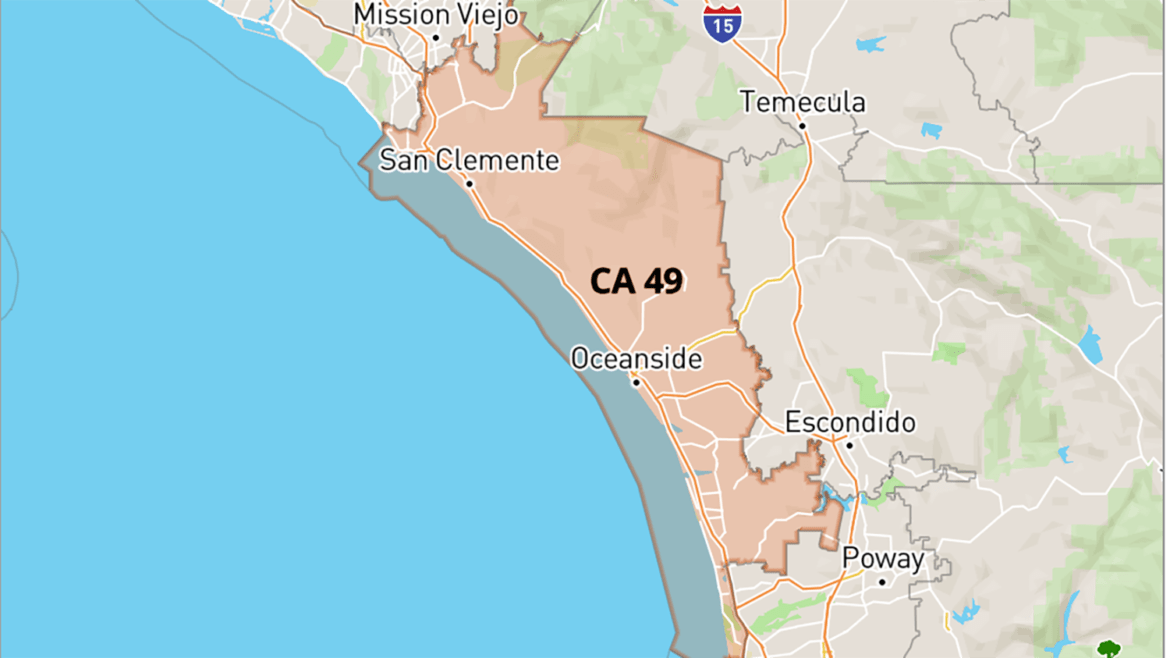 Elections experts said they are having trouble gauging who will advance to November in the 49th Congressional District primary election because of the large number of candidates running for the seat.

Two elections experts from UC San Diego say the 49th Congressional District race is still is up for grabs, while one expert from Chapman University said one Democrat and one Republican could advance to November.

“It’s hard to game this one because there’s just too many damn candidates,” said UC San Diego professor and elections expert Gary Jacobson. “When I look at this (race), I sort of throw up my hands and say, ‘I don’t know what’s going to happen.’”

Voters in the 49th Congressional District will see 16 names on their June 5 ballots— four Democrats, eight Republicans, one Green party, one Libertarian, one Peace and Freedom and one no political party preference — after incumbent Darrell Issa (R-Vista) said in January he won’t seek reelection.

The district had been targeted by national Democrats in their effort to win 24 seats nationwide to gain control of the House of Representatives.

“What’s going to happen, I don’t know  … The 49th is a relatively balanced district in terms of voter registration, so I think there’s a very good chance we have a Democrat versus a Republican in the general (election).” said Chapman political science professor and elections specialist Mike Moodian.

California operates under a top-two primary system, also known as jungle primaries, in which the two candidates who receive the most votes advance to the November general elections, regardless of political party.

“So you have this crazy situation where you can end up with two Republicans, two Democrats, one of each and it’s very hard to guess at this point how it’s going to go,” Jacobson said.

Jacobson criticized the jungle primary system and said it could lead to  one party being shut out, even in competitive races.

“The idea (behind a top-two primary) was in districts that were overwhelming Republican or Democrat, they (the candidates) would moderate their stances to appeal to the other side … but so far there is no sign that it has worked,” Jacobson said. “The downside is that even in a competitive district, it’s possible that one party has both nominees and I think that’s bad for voters’ choice.”

Issa was narrowly re-elected in 2016 by 1,621 votes — a less than one percent margin — over retired Marine Corps. Col. Doug Applegate. In the 2016 presidential race, the 49th Congressional District also voted for Hillary Clinton by seven percentage points. Orange County Republican voters were a critical part of Issa’s victory.

The district touches the most southern cities in the Orange County, including San Juan Capistrano, Dana Point and San Clemente. The majority of the 49th stretches down the west side of San Diego county, ending before La Jolla. It also includes the U.S. Marine Corps’ Camp Pendleton.

“The 49th in many ways, is representative of all of the various communities of California. You have the coastal socioeconomic elites … you have working class Republicans and working class Democrats … you have about 25 percent of the district composed of the Latino electorate, so it’s a diverse electorate,” Moodian said.

UC San Diego Political Science department chair and elections expert Thad Kousser said the top Republican candidates in the district are officeholders who could appeal to voters, while the Democratic candidates haven’t been elected to an office before, but noted Applegate’s 2016 support.

“This is probably an anti-incumbent year … I think there are a lot of voters comfortable checking off names for one of these (four) Republicans in the district and it’s always a challenge for someone who’s never won an election before for voters to be comfortable with that. With that being said, almost half the people voted for Doug Applegate last time,”  he said.

While he was unsure which Democrat might emerge in June, Kousser said on the Republican side Chavez stands a good chance because he’s more independent from the national leadership than Issa was.

“Rocky Chavez may be a stronger candidate than Issa. He has more of an independent record, clearly more independent from Donald Trump, he’s got the record of military service,” Kousser said. “And the big sign that he’s a threat is the DCCC (Democratic Congressional Campaign Committee) … is spending money in the primary against him.”

The Hill reported May 27 the DCCC, along with two other Democratic organizations, have spent $3.3 million on the district, which includes attack ads against Chavez.

Meanwhile, the four Democratic candidates are well-funded because they began planning and fundraising long before Issa announced his retirement and the Republican candidates jumped in the race.

Democratic candidate Paul Kerr, a U.S. Navy veteran and real estate investor, raised over $4.4 million, with over $4.1 million in self-funding. While he leads in campaign finance, he lacks endorsements. His website doesn’t have an endorsement section, but recent website updates show he has been endorsed by firefighters’ unions from Orange and San Diego counties.

Democratic candidate and environmental attorney Mike Levin raised $1.7 million, with over $1 million coming from ActBlue, an online, nonprofit Democratic fundraising organization. He’s been endorsed by seven members of Congress, including Rep. Adam Schiff (D-Burbank) and the Sierra Club, one of the oldest and largest environmental advocacy organizations in the country.

“The name recognition Doug Applegate has, and the funding that the other three candidates have, give them (the Democrats) a real shot in the race,” Kousser said.

Moodian said it’s a “new era” in Orange County politics because the Democrats were able to raise big war chests.

“When was the last time we saw a race where we had four well-funded Democrats going against each other? This is a new era we’re seeing out here.”

Maryott, a Republican and retired financial investor, raised $745,000, which includes $700,000 of his own money. While his website doesn’t list any endorsements, he was first elected to the San Juan Capistrano City Council in 2016.

Gaspar isn’t far behind with $356,000 raised. Her website doesn’t list any endorsements, but she spearheaded San Diego County’s move to join in the Trump Administration’s lawsuit against the state over Senate Bill 54, the state sanctuary law. She was accused of using the move to gain media attention for her Congressional campaign, the San Diego Union Tribune reported.

“I think clearly that it was designed to broadcast her stance on that issue,” Kousser said. “I think it raised her profile immediately to put her in the top tier of Republican candidates, and it also solidified her conservative credentials.”

Moodian said the Marine Corps service from Chavez and Applegate will attract many votes.

“They’ve always been touting their Marine Corps credentials and that is powerful in the 49th,” Moodian said. “You still have towns that are very pro Marine Corps — that’s why I believe Applegate did so well two years ago. That’s why Chavez is doing the same thing.”

Orange County was key to Issa’s 2016 reelection, when OC voters went for Issa by a margin of 20 percent — over 16,000 votes. San Diego voters opted for Applegate by a margin of about 20 percent.

Kousser said the 49th Congressional District race is tough to predict because of Issa’s January announcement.

“That’s what everyone’s asking about, because this is one of the top Democratic targets when Darrell Issa held the seat and the irony here, is when he pulled out he might have actually increased the Republicans chances of holding on to this district,” Kousser said. “It was easy for Democrats to unite against Darrell Issa, but now Democrats seem to be splitting into four different factions without a common enemy.”

Over 380,000 registered voters live within the district and nearly 95,000 are Orange County residents. District wide, Republicans still hold the edge at 36 percent of voters, with Democrats trailing at 31 percent. No party preference voters stand at 26 percent.

The gap between the Republicans and Democrats is small in San Diego’s 285,000 registered voters. Republicans are a majority, but by less than 3,000 voters — or 33 percent, a little over one percentage point over Democrats. No party preference voters make up 27 percent of San Diego voters in the 49th district.

Republicans lead among Orange County’s nearly 95,000 registered voters in the district. The Republicans have 46 percent of voters, while the Democrats trail at 25 percent. The no preference voters are 23 percent.

Mirroring voting trends in the other congressional districts in Orange County, 46 percent of voters participated in the 2016 primaries and only 25 percent showed up to the polls in the 2014 off-year primary election.

Jacobson said confusion could plague 49th district voters June 5 because of the number of candidates.

“My guess is there’s going to be a lot of confused voters and it’s going to depend on if any of them (political parties) have any kind of capacity to mobilize and get their folks to the polls,” he said.

He also said a “niche” candidate could make it to November’s general election.

“You have your candidates divvying up the vote,” Jacobson said, adding that someone could advance past the primaries with 15 percent of the vote “and they may not at all be attractive to the 50 or 60 percent of the district.”