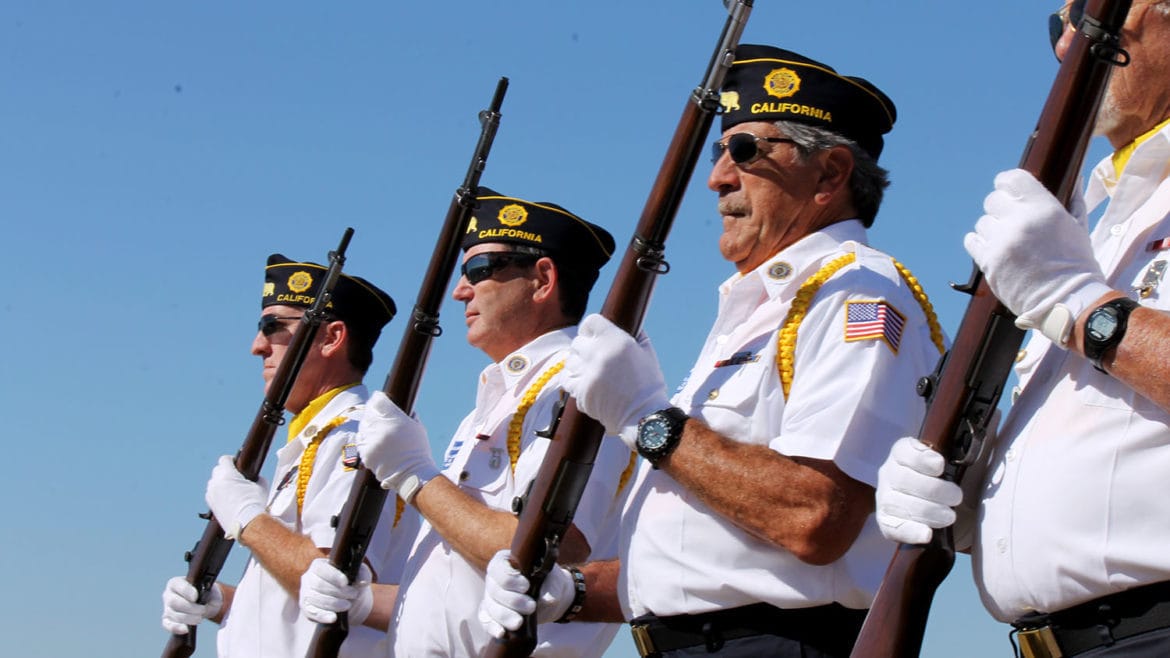 Veterans before a 21-gun salute at a site dedication ceremony at the now defunct strawberry field site. Oct. 27, 2017.

The location of Orange County’s first veterans cemetery could change again as the county Board of Supervisors will have a closed session discussion June 26 about the possibility of creating the cemetery on county-owned land near Anaheim Hills.

Supervisor Todd Spitzer added the discussion about land to the supplemental agenda Tuesday,  according to a June 19 memo. The roughly 288-acre land sits next to the 91 freeway near the 241 toll road interchange and Gypsum Canyon road.

“The question for the board next week is, ‘will you support asking the staff to do an analysis of a cemetery … in order for the board at a future date to follow up on whether it will become a cemetery,’” Spitzer said in a Tuesday night phone interview.

Spitzer said supervisors authorized a cemetery as one of the uses on the land when the board voted to accept it as a gift from the Irvine Company in 2015.

The move comes after Irvine voters overwhelmingly rejected a land swap between the city and developer FivePoint Holdings during the June 5 election. The ballot question, which was a land zone amendment, would have allowed Irvine to trade land near the heart of the former El Toro Marine Corps Air Station for agricultural land off the 5 and 405 freeways.

Former Orange County Employee Association General Manager Nick Berardino said he approached Spitzer shortly after the election. Berardino, a Marine combat veteran in the Vietnam War, is also president of the Veterans Alliance of Orange County (VALOR), a group of veterans who advocated for the land swap.

“We had been focusing of course in Irvine, but once the voters decided they didn’t want a cemetery there, we approached Todd (Spitzer) basically and said ‘hey look, let’s build that thing …’ had a discussion with Todd (Spitzer) about building out that property because it’s right there on the 91 and the 241,” Berardino said.

“The only reason I’m bringing this forward now is because the veterans requested me to do this. I’m doing this for the veterans,” Spitzer said. “I’ve had this land for three years (in his district) and I’ve never pushed this against El Toro (the original cemetery site).”

The land swap was authorized by the Irvine City Council June 6, 2017 — the 73rd anniversary of D-Day, the Allied invasion of Europe in World War II. After that decision, verbal battles between the two camps and among council members occurred.

Former Irvine Mayor Larry Agran and Irvine resident Ed Pope led the opposition campaign against the swap and started to gather petition signatures last October to overturn the swap. Pope is a U.S. Army veteran and Agran was in the Air Force Reserve.

“We just got fed up with, absolutely fed up with being political pawns,” said Berardino, who supported the land swap. “It was obvious in the [land swap] race that they were using veterans as political pawns between political factions and special interests. … We’re hoping that the rest of the board will join in and say, ‘Enough — vets don’t deserve to be little pawns on a chess board. It’s there, it’s zoned for a cemetery, they want to be there.’”

The board’s closed session discussion item happens the same day Irvine Councilman Jeff Lalloway was to introduce a motion to reauthorize the original site, but he pushed it back until July 10 because Councilwoman Lynn Schott won’t be in town next Tuesday.

“This is important and all the councilmembers need to be there,” Lalloway said in a Wednesday night phone interview. “This is an issue of major concern in the city and all of our voices need to be heard. I changed the date before I knew they (Supervisors) even had this in closed session.”

Lalloway and Schott are proponents of the original site among the five-member Irvine City Council, while the others voted to swap land with FivePoint.

A 2016 California Department of Veterans Affairs (CalVet) study estimated the cost of the original site at $78 million, including $38 million in site clean up. The site still has hangars, barracks, taxiways, jet testing buildings and an active Federal Aviation Administration antenna array on it.

Berardino said, like most construction projects, the costs would probably keep going up and he was skeptical  the original site could get the funding.

“And then if they ever get that far, which is highly doubtful, then there’s going to be litigation from the schools around there,” Berardino said. “You’re looking at decades to get into that place.”

VALOR sent Spitzer a letter Monday asking him to have the board look at the possibility of a cemetery on the Anaheim Hills land.

Berardino said the site is perfect because there are no competing interests on the land.