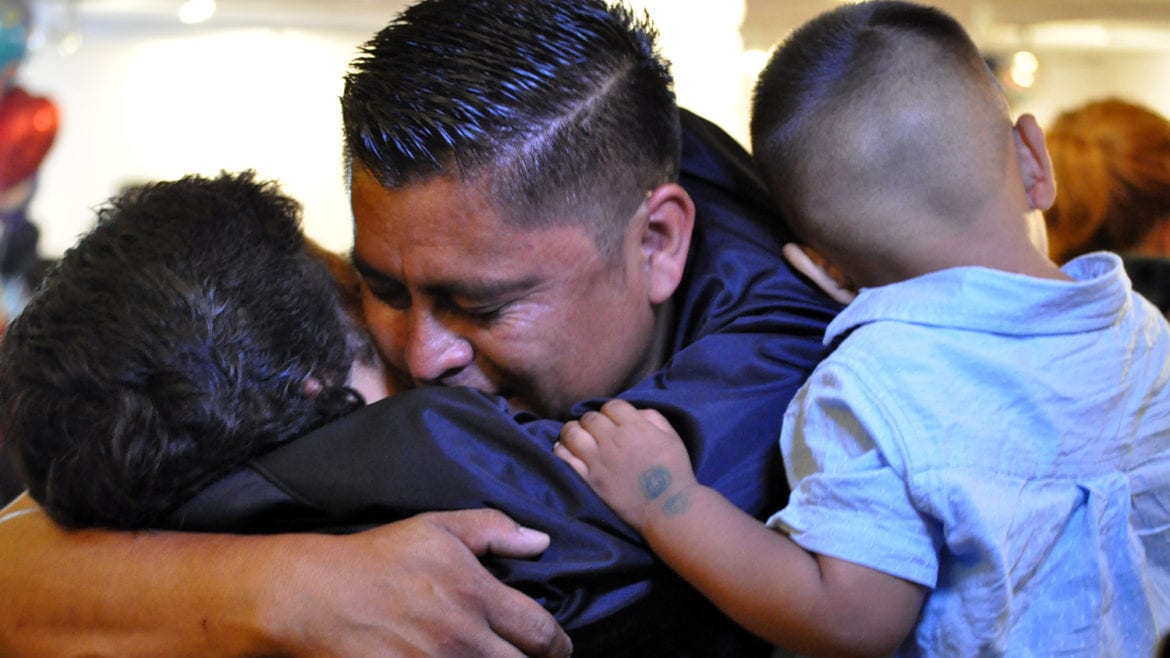 West Covina resident Hugo Camacho is reunited with his mother Silvia Primero after 17 years. Primero was part of the 23 people reunited with their families July 24, 2018 in Santa Ana.

People hugged their children and grandchildren Tuesday in Santa Ana when 23 people who hadn’t seen their families in at least 10 years flew from Mexico after securing travel visas that they can use for 10 years.

The Santa Ana-based community group, Corazones Unidos De Zumpahuacàn, worked with other organizations in Mexico to get 35 people the 10-year visas. When the group arrived at Los Angeles International Airport Tuesday, 12 people flew to reunite with families in other states including Illinois and Kansas.

In Santa Ana, West Covina resident Hugo Camacho said he hadn’t seen his mother in 17 years. The 38-year-old teared up and grinned as his mother came into the room and the two immediately hugged. 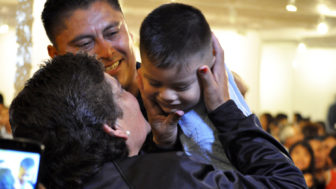 West Covina resident Hugo Camacho sees his mother, Silvia Primero, for the first time in 17 years. The two were reunited in Santa Ana July 24, 2018, where she hugged and kissed Camacho’s son.

“It’s been a long time — 17 years,” Camacho said. “We’re going to go on vacation next week to different places … first is Las Vegas.” He said he also plans to take his mother, Silvia Primero, to Disneyland during her two-week visit.

Erica Flores, who’s married to Camacho, said they were trying to work with other groups at first, but Corazones Unidos offered the most help. “It’s so nice, what they’re doing for us.”

Because of the undocumented status of many people won’t allow them to travel to Mexico to visit their families and come back, the Corazones Unidos group instead looks to bring family members for visits from Mexico to the U.S. through the visa program.

Corazones Unidos President Jose Merida, a Santa Ana resident, said he started the group roughly one year ago and has helped get 10-year visas for Mexican citizens so they can visit their families here. 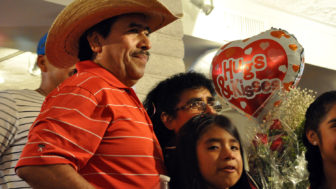 People waiting to greet a family member who lives in Mexico that they haven’t seen for at least 10 years. July 24, 2018.

Merida, through a translator, said he got the idea when he wanted to hug his parents who he didn’t see for roughly 10 years, but they were living in Mexico. Merida said he visited his mother about five years ago, but that visit caused his naturalization process to restart and he was told he needed to wait 10 years before reapplying for citizenship. He has five years left.

The requirements for the Corazones Unidos program are: the person in Mexico must be at least 60 years old and hasn’t seen their children in 10 years or more, has a passport, identification and no criminal record.

Merida said it’s easier for the all-volunteer organization to secure 10-year visas for people who are 60 or older. He said they file 50 visa applications each time they do a round of a reunions and an average of 35 are approved by U.S. officials. Tuesday marked the fourth round of reunions the group has done and Merida said nearly 200 people have been reunited with their families. The visits typically last for two weeks. He said he plans to do another one in two months. 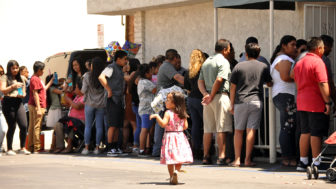 People stand outside as they wait to be reunited with family members from Mexico for the first time in at least 10 years. July 24, 2018.

The families were reunited at the El Centro building near the Civic Center in Santa Ana. El Centro is a community group that does various educational activities for the neighborhood and helps people with their immigration issues.

The senior-age parents sat in the air-conditioned front part of the building, where they shared stories with each other and snacked on sandwiches and fruit while they waited to be called into the large dance room in the back where their families awaited them.

Tears mixed with beads of sweat were on the many faces in the hot, crowded dance room as they embraced parents they haven’t seen for at least 10 years. Many had balloons and flower bouquets to greet their parents. Temperatures climbed to the low 90’s Tuesday and the National Weather Service issued an excessive heat warning until Thursday night. 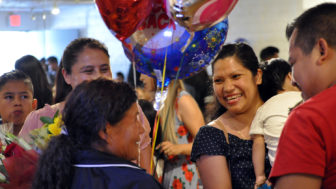 Family members greet parents and grandparents from Mexico after not having seen them for at least 10 years in a reunification event in Santa Ana July 24, 2018.

Elizabeth Campos, a 22-year-old Santa Ana resident, flew to Mexico City and helped the 35 people board their flights and get to LAX.

“It was really sentimental … to witness people who haven’t seen each other in years, decades even,” Campos said. “To not see someone for that long is a crazy concept — especially considering that someone is your child or your parent.”

She said the trip was challenging because the group doesn’t have anybody dedicated full-time to handling the logistics of the trip. Campos said while the group faces challenges because they don’t have a professional staff, the efforts from everyone help make up for it. 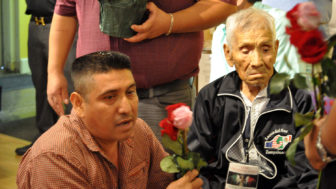 A son is reunited with his father after from Mexico after not seeing him for at least 10 years at a family reunification event in Santa Ana July 24, 2018.

Merida said Corazones Unidos pools its money with the families to help pay for flight tickets and document processing. The visa application fee is $160, according to the U.S. Department of State website.

“You see these people busting their asses,” Campos said. “The project was brought to life by the efforts of the people … they have an insane will of wanting to do this.”