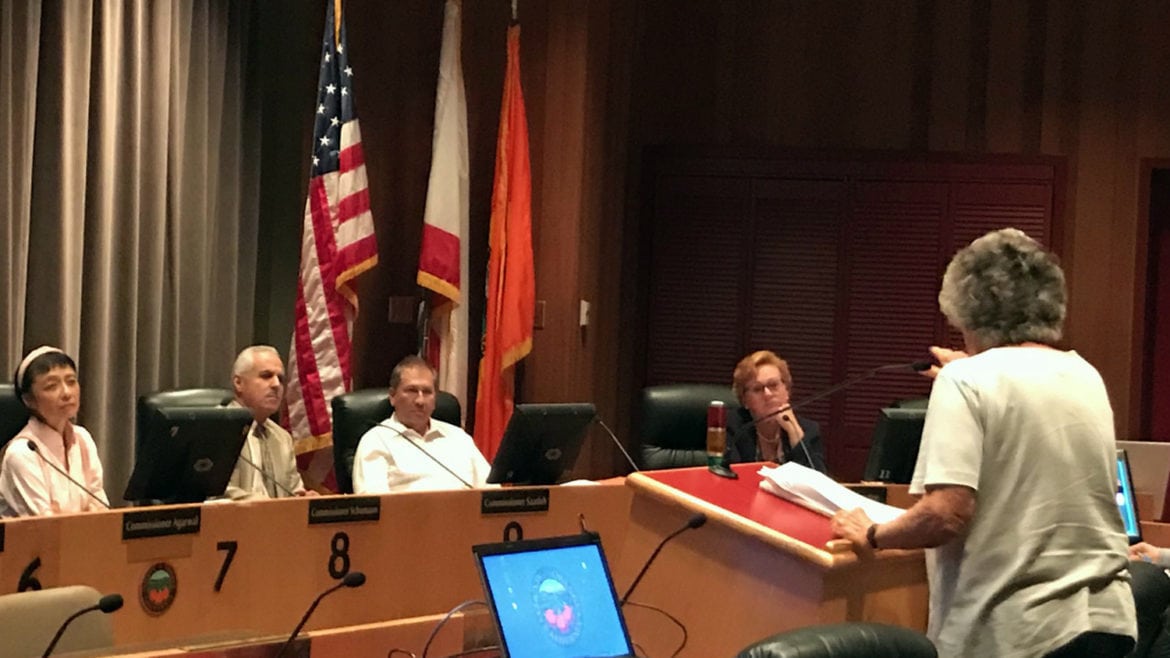 The county’s campaign money law limits candidates to receiving $2,000 per donor each election cycle and requires disclosure of each donor’s occupation and employer. Intentional violations are a misdemeanor.

County officials, who report to the Orange County Board of Supervisors, took on the non-criminal enforcement duties in April 2017, after voters approved an ethics enforcement measure.

“My belief is it’s been working the way it’s supposed to work, which is Ms. [Denah] Hoard’s been resolving conflict, and it’s confidential and people have been correcting things,” said Supervisor Todd Spitzer, who was closely involved in structuring the enforcement approach, during the supervisors’ June 12 meeting.

“It’s worked…exactly the way I think it’s supposed to work.”

Hoard, who is the county’s chief enforcement official, this week declined to say how many campaign violations have been discovered since she took office 15 months ago, citing her policy against news media interviews. She referred all questions to the county CEO’s office.

In response to follow-up questions from Voice of OC, a county spokeswoman disclosed letters regarding two cases of alleged violations, which center on two of Spitzer’s opponents in his run for county district attorney: incumbent DA Tony Rackauckas and DA candidate Brett Murdock, the latter of whom lost in the June primary. In both cases, Rackauckas and Murdock’s campaigns were allowed to fix the issues and no fines or other penalties were levied.

But Hoard and the county’s chief spokeswoman, Molly Nichelson, have declined to disclose any of the other cases in which officials have allowed candidates to correct actions that may have violated the law without issuing a letter finding a violation.

“Two cases have resulted in findings of violations. In some instances informal communications with candidates and elected officials have been sent out to determine if excessive contributions could have been received. This is in cases where insufficient evidence could be found to make a finding or it is unclear of a relationship between individuals and business entities,” Nichelson wrote in a Tuesday statement responding to Voice of OC’s questions to her and Hoard.

“The contacted individuals have voluntarily refunded potential excessive contributions without the need for further intervention.”

Nichelson and Hoard declined to say which candidates and donors were involved in these cases, nor how many times candidates have been allowed to return money in excess of the limit without a formal violation finding.

They also declined to disclose to the county’s campaign finance commissioners the substance of several complaints that have not resulted in resolution letters. In declining, Hoard and county attorney Jacqueline Guzman cited due process for accused candidates, confidentiality, and a need to protect the independence of the commission that would hear appeals of enforcement decisions. There have been no appeals so far.

In one case, a violation was found but no letter was sent because Hoard determined the contribution was sent by mistake, she said Monday at the quarterly meeting of the county’s Campaign Finance and Ethics Commission. Hoard did not identify the individuals involved.

In another case, a person has submitted seven or eight separate complaints about alleged violations, roughly one per month, and Hoard said she grouped all of the complaints together into a single number so they don’t “pad” the complaint numbers. She didn’t identify the person.

Terry Francke, an expert in California public records law, said he’s not aware of any exemptions that would allow the county to keep the campaign money complaints and findings secret.

“It sounds kind of dubious to me,” said Francke, who serves as general counsel of the transparency group Californians Aware and is Voice of OC’s public records consultant, adding he’d be interested in seeing their full legal justification for it.

County officials didn’t have an answer Tuesday when asked what their legal justification is for keeping the information secret.

“Just for perspective, if you or I get caught shoplifting, it’s not gonna be kept a secret. Or if somebody even suspects that we shoplifted something, we are subject to arrest, and that’s not going to be kept a secret,” Francke said.

“So whether there’s a special level of protection for people with political reputations is another question.”

This week, the Orange County commissioners who are supposed to monitor campaign finance enforcement questioned why they weren’t provided information about the substance of complaints and how they were resolved.

When voters approved the June 2016 ballot measure, they directed supervisors to create a Campaign Finance and Ethics Commission to monitor enforcement and hear appeals of enforcement decisions.

At the panel’s quarterly meeting Monday, commissioner George Saadeh asked Hoard about “the right to have a little bit more information, you know, about each of the complaints, so that at least we understand where they’re coming from.”

“One of my suggestions is perhaps we can get a brief summary of each one so that we can have a little – a little bit more information regarding each one of ‘em. And that way it doesn’t feel as though all we do we just sit here and say, ‘Okay, this looks good,’ ” said Saadeh, a former Santa Ana police executive.

Guzman, the county attorney, said it would be improper to let the commissioners know the substance of the closed complaints because their role is to decide on appeals of enforcement action.

“Allowing the commissioners to review the background or more specific facts relating to the violations that have been alleged raises serious questions of due process,” Guzman said in response to Saadeh’s request.

“It’s our understanding and our opinion that in order to maintain the integrity of the process – of the enforcement process – the commission has to remain an impartial decision-maker.”

Guzman said the commissioners might be able to get information about the type of violations that have been sustained, but not the facts of the violations or who violated the law.

“There may be the possibility of stating the violation, without stating the facts,” Guzman told the commissioners. She suggested they could find out “what type of violation occurred.”

“I think that that would be…fact-neutral enough that that could give you more information without divulging the alleged violator of the code, [or] the facts underlying that allegation.”

Shirley Grindle, a campaign finance watchdog who pushed the county to take over enforcement, said the enforcement process was set up to be handled mostly in secret so violations wouldn’t be used in political campaigns.

“This whole thing was set up so that most of the violations would be handled by the executive director [Denah Hoard], kept out of the public eye, not used for political purposes in a campaign,” Grindle told the ethics commissioners at Monday’s meeting.

“The unforeseen consequence of that is you guys don’t feel like you’re doing anything.”

At the same time, Grindle said the commissioners should be getting more information.

“I support very much giving you a little more information, in a summary form,” Grindle said. “If I were a commissioner, I really would want to know more. I would not want to be kept totally in the dark. So I sympathize with your position.”

Other campaign finance offices in California handle disclosure differently from the way Orange County supervisors set up the local system.

And the Los Angeles City Ethics Commission – which enforces campaign finance laws in LA – says it posts all of its enforcement orders since 1993, which can be accessed through its website.

In Orange County, the supervisors structured the county campaign finance enforcement so they are the direct bosses of the chief enforcement official, and can fire and replace her at any time without needing to provide a reason. It’s unclear to what extent supervisors receive information that is not readily available to the public.

Hoard started as the top enforcement official in April 2017, and the ethics commission held its first meeting in October 2017.

County officials developed custom software to search existing campaign finance data when complaints arise, though they have not set the software up to automatically flag violations.

Such a feature would involve simply having the computer add together the amount each donor has given to each campaign and flag the amounts that went over the limit. That ability is available in low-cost software like Microsoft Excel, as well as free software like Google Sheets.

“We have not started that yet,” Hoard said when asked by Saadeh, the ethics commissioner, if the county database automatically flags when a candidate or contributor exceeds the limit.

Asked how much the automatic flagging feature would cost, county officials said they have not yet estimated the cost.

“Costs have not been estimated as we have not had sufficient time to use the program and link contributors,” Nichelson, the county spokeswoman, wrote Tuesday in her emailed response to questions.

“Flagging violations is extremely complicated because of our [campaign finance laws]. We have a unique definition of ‘election cycle’ that can change for each candidate in each election depending on the facts such as whether you win or lose or if there is a run off,” Nichelson wrote.

“Moreover, in most instances the ‘over the limit’ issue involves entities and individuals that we have not yet ‘linked’ and do not have the same name or similar addresses. We are in the beginning stage of using this investigatory tool that we hope to manipulated [sic] in the future for freer public access.”

Automatic flagging of violations is something Grindle, who is 83 years old, has done for decades by hand with paper cards. One of the reasons Grindle pushed supervisors to put the ethics enforcement on the ballot was so someone else can take up her unofficial job of monitoring campaign finance laws.

“It is not yet available to the public as the database shows addresses that are not publicly available online and contains investigatory notes,” Nichelson, the county spokeswoman, wrote in her emailed response to questions.

“If the public seeks information on campaign filings it can still use the [county Registrar of Voters] website and find the same information. Moreover, the public can submit requests to [Hoard’s] office and properly redacted documents will be provided.”

The Registrar of Voters data also is in a raw format with hundreds of thousands of data cells, which often runs slowly or crashes when opened on a personal computer. Hoard’s internal system appears to use a server to handle the raw data processing, which typically speeds up the time it takes to conduct data searches.

Voice of OC intern Kassidy Dillon contributed to this story. Contact her at [email protected]