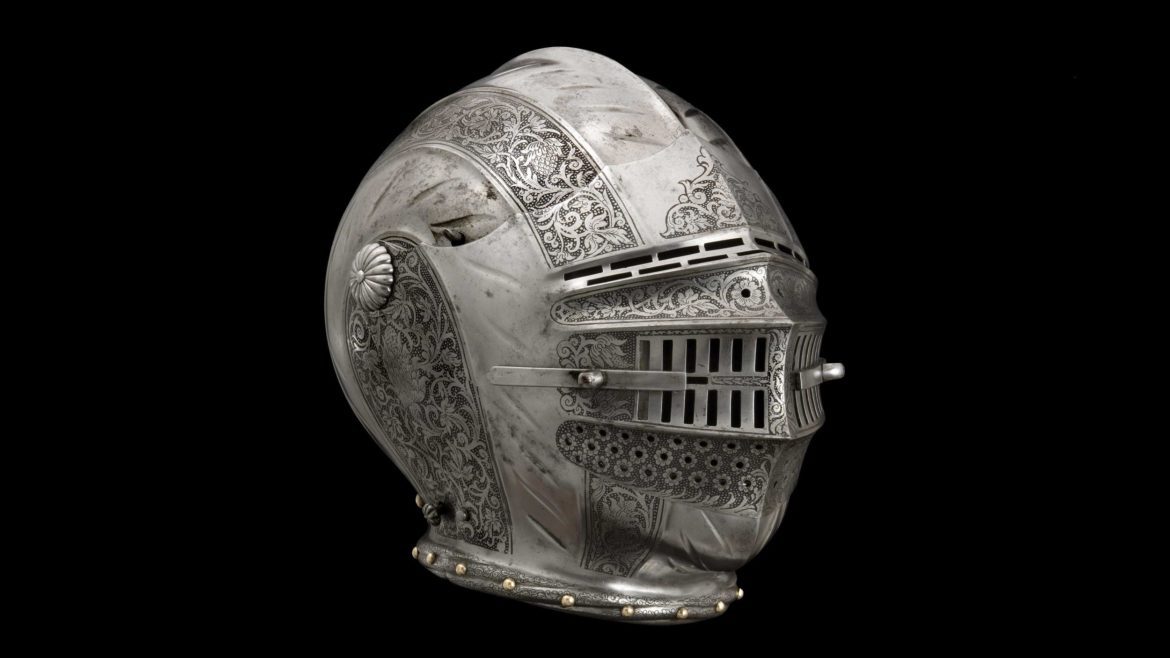 This helmet will be on display as a part of the Knights of Armor exhibit at the Bowers Museum. (Photo courtesy of Archivio Fotografico Museo Stibbert)

Frederick Stibbert was an avid collector of armor, weapons and art. He was born in Florence, Italy, in 1838, to an Italian mother and an English father.

His grandfather was commander in chief of the British East India Company’s private army. Needless to say, when Giles Stibbert passed, Frederick gained quite an inheritance. He used the money to purchase art, armory, weaponry and artifacts, and transformed his hillside villa and park into the Museo Stibbert.

When Frederick died in 1906, he willed his museum and collection to the municipality of Florence.

Now, 112 years later, the Bowers Museum in Santa Ana is presenting the West Coast premiere of  “Knights in Armor,” running now through Jan. 13. The traveling collection of more than 100 European arms and pieces of armor comes from the Stibbert Museum, with help from Contemporanea Progetti, a Florence-based company that specializes in the organization and production of temporary exhibitions featuring Italy’s artistic and cultural heritage.

The Bowers last collaborated with Contemporanea Progetti when it brought “Gems of the Medici” to its galleries in 2013.

“The exhibition features about 100 pieces of armor and arms that date from Medieval ages to the Renaissance, which is approximately the 16th century,” said Linda Carioni, head of international relations for Contemporanea Progetti. “There’s a lot of pretty wild stuff. There are full-blown models of horses with mounted knights on them.”

On display in the Bowers’ main exhibit hall are full suits of battle armor, helmets, shields, swords, daggers, a crossbow and paintings. Some pieces of armor, breastplates and shields feature intricate designs on them, a few accented with bronze or gold.

The majority of works come from Italy, Germany, France and the Netherlands. In addition to highlighting achievements of the Renaissance period, the exhibit offers some pieces from the 18th and 19th centuries, when a revival and rediscovery of the art of the knights occurred throughout Europe.

“In the exhibition, we are trying to give a wide vision of the world of the knights,” Franci said. “It’s very important to understand the culture of the knights. We will present activities of the knights — not only war, but also entertainment, with some examples of jousting, arms and armor, and a few paintings to help illustrate these activities. All the pieces that we choose are of a very high level, because we wanted to describe the highest point in the history of the art of the arms, armor and knights.” 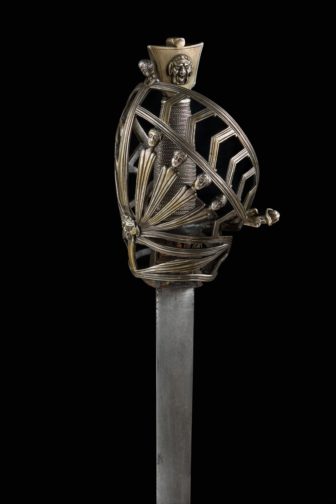 The hilt of the Schiavona sword can be viewed as a part of the Knights of Armor exhibit at the Bowers Museum. Photo courtesy of Archivio Fotografico Museo Stibbert

One section of the exhibition puts the spotlight on intricately crafted swords, and how they evolved over time. Blades became longer and thinner over time, handles adapted to cultural preferences, and hilts became larger to protect fingers from getting cut off, according to Mark Bustamante, research associate from the Bowers’ collections department.

Several explanatory banners and panels describe the elements of a knightly suit of armor, the components of a knight’s sword, and historic movements that affected the culture of the knights.

According to a Bowers press release, the museum will offer unique interactive activities, including a sword-in-the-stone photo station and a “Knight’s Quest” scavenger hunt, although neither of these could be seen during a recent press preview.

The Bowers is also planning a number of exhibition-related events, including knights demonstrating combat in the outdoor courtyard on Sept. 23; a “Masters of the Renaissance” lecture series by James Fishburne, Oct. 3-Nov. 7; an Italian Renaissance Faire on Oct. 7, which will include a medieval feast from 6-9 p.m.; and screenings of knight-related movies on Nov. 24 (“Monty Python and the Holy Grail”), Nov. 25 (“A Knight’s Tale”) and Dec. 15 (“Camelot”).

Peter Keller, president of the Bowers, said he believes “Knights in Armor” is the first exhibition in Southern California to focus on European armor.

“Here at the Bowers, our mission is to bring the great art treasures of the world to the people of Southern California,” Keller said. “And certainly, when you go to Florence, Italy, and see this Renaissance armor, it’s an art form, but it’s also a major part of history.”

In conjunction with “Knights in Armor,” the Bowers Kidseum is presenting “Kings, Queens and Castles” from Sept. 29 through Feb. 18. The Kidseum show will feature a jumbo chess board with life-size pieces, an explorable medieval castle, art projects and many other interactive activities.