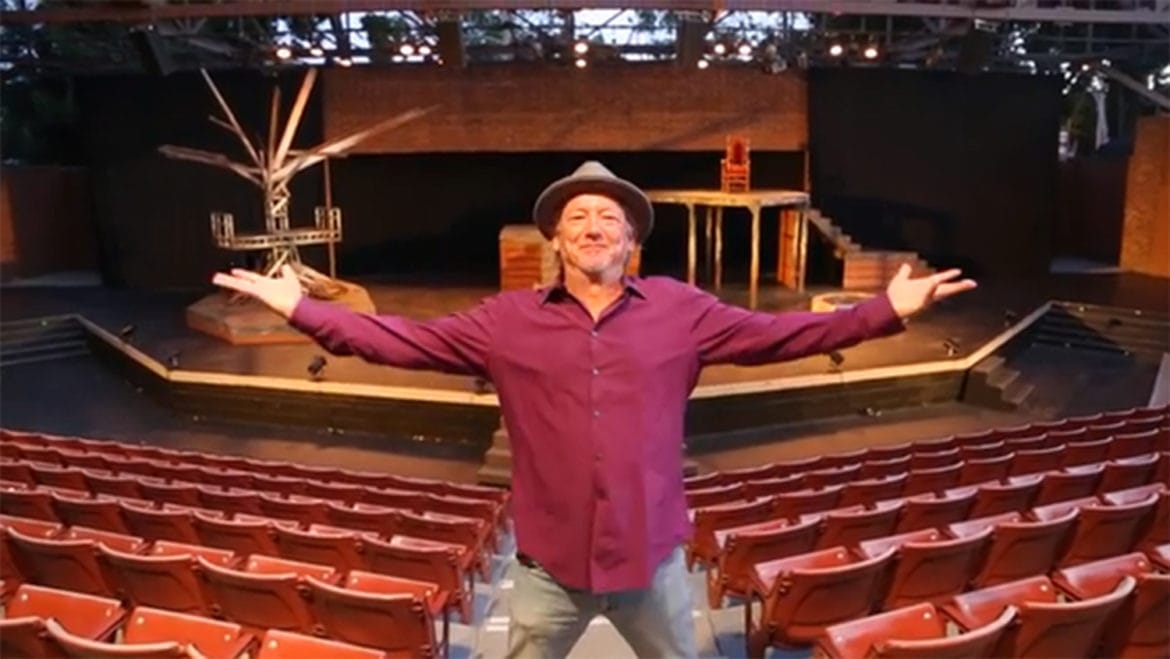 John Walcutt in the Festival Amphitheater, the venue where Shakespeare Orange County performed in Garden Grove for many years.

He Said, He Said – In A Nutshell

John Walcutt, artistic director, Shakespeare/Summerfest Orange County: Says that SOC has been pushed out of Garden Grove’s Festival Amphitheater by city officials. They couldn’t promise a construction-free venue for the dates of his Shakespeare company’s 2018 fundraiser or summer season and have made it difficult for his company to return.

Viet Tran, partner, LFA Group LLC: Signed a 10-year contract with the city to produce events in the amphitheater. Says the city told him that “[SOC] cancelled the contract and [Walcutt] said they’re moving on.”

Scott C. Stiles, city manager, City of Garden Grove: Was present during meetings between Walcutt and the city. Declined requests for an interview and referred all questions to Montanchez.

Steven R. Jones, mayor, City of Garden Grove: According to Walcutt, Jones says that LFA Group doesn’t want to work with SOC. Didn’t respond to request for an interview.

It looks like Garden Grove’s long relationship with Shakespeare could be coming to an end.

The bard’s plays have been an annual tradition at the Festival Amphitheater, an outdoor city-owned space, since its completion in 1981. For two years before that, Shakespeare was presented next door to the amphitheater at the Gem Theater, a former movie house also owned by the city.

Thomas Bradac, a longtime professor in Chapman University’s theater department, started the Shakespeare tradition at the invitation of Garden Grove officials. Since then, companies and leadership have changed numerous times, but Shakespeare’s masterpieces were always an important element of each season at the amphitheater over the last four decades.

But a series of meetings involving Shakespeare/ Summerfest Orange County (SOC), Garden Grove city officials, and LFA Group LLC, the current producer of shows at the 550-seat amphitheater, have left SOC’s producing artistic director, John Walcutt, with what he calls “an impossible situation” with no opportunities to stage plays or hold the company’s annual Strawberry Festival fundraiser at the amphitheater.

City officials and the venue’s producer disagree with Walcutt, saying that the relationship doesn’t need to end.

The problems began when LFA signed a 10-year contract with the city in February 2017 to produce events in the amphitheater. SOC was guaranteed 24 performance slots between March 1, 2017 and December 31, 2018, with an option to extend the arrangement for five years. Walcutt’s group was also permitted to use the facility for its annual spring fundraiser.

LFA immediately applied for construction permits to improve the facility at its own expense. It took various city departments several months to approve the permits.

By early 2018, Walcutt realized that renovations, even if they started soon, would interfere with his company’s planned fundraiser and season. At a March meeting with city officials, Walcutt posed two crucial questions.

“I asked, ‘Are they going ahead with construction?’” He was told yes. “I asked, ‘Can we do our fundraiser and our season if (the amphitheater) is under construction?’ They said no.”

Walcutt said he had no choice but to cancel the season and fundraiser. “We only did our educational program this year.”

“We were supposed to talk about our season. They said, ‘We can’t do anything because LFA said they were under the impression that (your company) is no longer here.’ I said, ‘How could that be? You and I and LFA were all at the last meeting. I never said such a thing.”

LFA partner Viet Tran countered that his company doesn’t owe Shakespeare Orange County any time slots. “From my understanding, they cancelled the contract and (Walcutt) said they’re moving on. The door is open for him if he wants to come back.”

Montanchez insisted that the issue is simply a scheduling problem between LFA and Shakespeare Orange County.

“For some reason, the schedule didn’t work out for (SOC). We’ve asked both parties to work out their schedules. We’ve told LFA they’ve got to do what they can to work together with SOC. It’s up to them to work it out.”

Montanchez added that planned renovations would not have interfered with the Shakespeare company’s season.

“The construction itself was going on in the kitchen area. The biggest impact would be that they couldn’t (use the) snack bar. Other than that the venue was completely open for them to use.”

Tran confirmed that work on the theater itself will be carried out later. Only the kitchen/bar area has been renovated so far.

Montanchez said he is hopeful that Shakespeare/Summerfest Orange County will return to Garden Grove. “Our position is we definitely want them to come back. They just need to work things out with LFA.”

Walcutt disagreed with Montanchez’s assessment of the standoff. Walcutt said the city made its hands-off position clear in a Sept. 6 meeting he requested, attended by Montanchez, Stiles and Garden Grove Mayor Steven R. Jones.

“The Mayor told us, ‘LFA is already booking for next summer and there will be no room for you to have a summer season. Maybe you could rent a weekend from them sometime.’ They made it clear to us that there will be no place for Shakespeare at the amphitheater with LFA there.”

Walcutt is looking to move his summer Shakespeare season elsewhere. On Thursday, he met with officials from Santa Ana College, one of several parties that Walcutt said are interested in hosting SOC – he hopes as early as summer 2019.

Still, Walcutt hasn’t given up on Garden Grove. He made a final proposal to Mayor Jones for a small season in July 2019.

“I said that if we were based somewhere else next year, we could bring one of our shows to the amphitheater for just a couple of weeks in July, so as to make it easier on LFA and yet continue to be a presence in the community there. The Mayor’s response was: ‘LFA pushed back on this. Can’t make it happen.’”

The chasm of misunderstanding between Walcutt’s group, the producer and the city is bigger and murkier than the storm scene in “King Lear.” Perhaps this imbroglio is simply the result of miscommunication among the three parties. But during several interviews, the city’s attitude toward Shakespeare Orange County came across as ambivalent at best.

“Almost nobody from the city ever comes to see our performances. Ever,” Walcutt said.

Montanchez, an employee with Garden Grove’s Community Services department for 16 years, confirmed that he has never attended a Shakespeare production at the amphitheater, which falls under his department’s jurisdiction.

“Why is that relevant?” he asked.