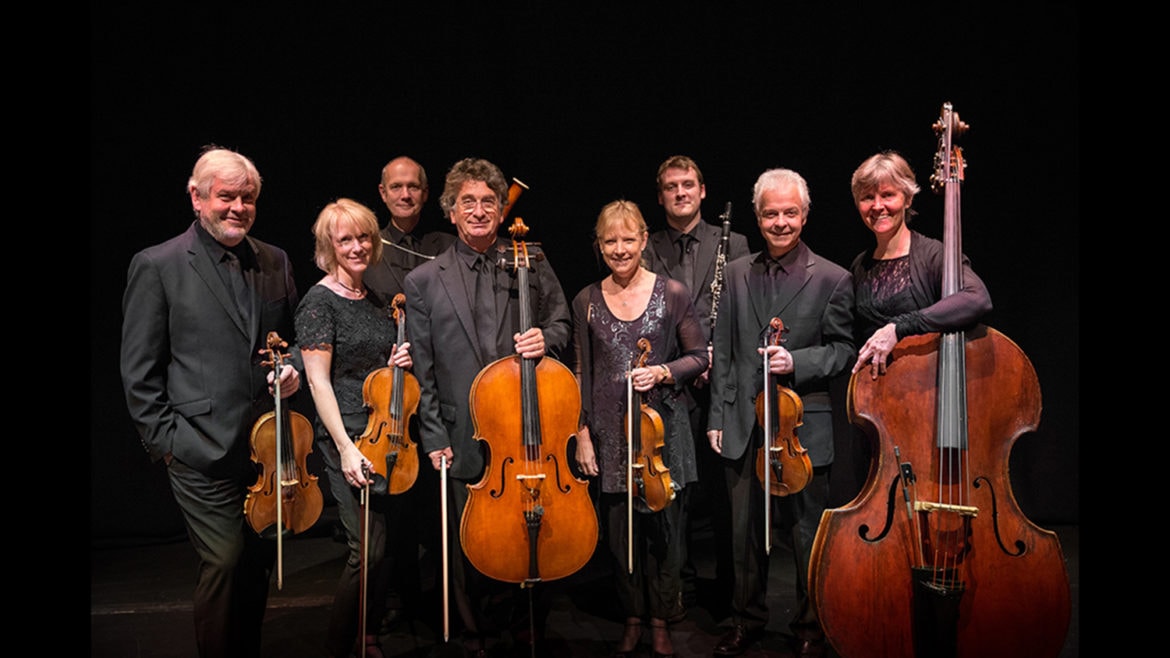 I’ve always felt that the orchestra’s true name is “The Academy of St Martin in the Fields Sir Neville Marriner Conducting.” Years of conditioning is hard to overcome.

The Sir is no longer with us, though, and in fact, the full complement was also not with us Wednesday evening at the Samueli Theater. We did, however, hear the Academy’s Chamber Ensemble thankfully upholding the high standards established by its founder in 1958.

The ensemble, which emerged from the mothership in 1967, draws its ranks from the orchestra’s principals. It is also quite its own entity, with its own active touring schedule and extensive discography. It’s performed in numerous configurations – trios, quintets, etc. – and for its current month-long trek through North America, the ensemble is an octet, under the direction of violinist Tomo Keller.

This was the first concert of the 2018 Laguna Chamber Music Series, presented under the auspices of the Philharmonic Society of Orange County. It was also only the second concert presented under the Society’s new president and artistic director Tommy Phillips, who formally took the helm at the beginning of October.

If all the concerts under his watch are as delightful as this one, he’ll enjoy some smooth sailing. The ensemble brought an inventive and unpredictable program for winds and strings to Costa Mesa: two 20th-century charmers, and a classical era stalwart. All was played with technical grace, dynamic balance, elegant reserve, with momentary flashes of fiery passion.

Nielsen himself dismissed his amiable, bouncy Serenata – for clarinet, bassoon, horn, double bass and cello – as a “trifle.” A good trifle is hard to find, though. It’s brief but richly constructed, compressing a wealth of ingenuity into its compact size. By turns slapstick and noble, full of mystery and swagger, it provided ample room in the spotlight for each player to shine in turn and together.

Here, the five players blended well, showed courtesy and respect to each other, put up a good unified front. Clarinetist James Burke carried the heaviest load, executing his solo work with a pure, even, creamy tone, and flashy dexterity when called for. Double bassist Lynda Houghton served as the stabilizing foundation, offering sonorous, clear, and graceful playing throughout.

The work matched well with Francaix’s equally good-humored Octet, albeit this work is conceptually larger and more contemplative. We still have comic touches, a gallop that wouldn’t be out of place in a Keystone Kops one-reeler, and there are moments of melodic expanse and open harmony that strongly echo Copland. The ensemble, at its full force of eight now, gave the reading urgency, particularly in the frenetic, dizzying, waltz that brings the work to a close. A perpetual motion machine filled with whiplash turns and abrupt shifts in mood, the movement provided violinist Keller with a virtuosic turn.

Francaix dedicated his octet to Franz Schubert, hence the pairing with the piece that inspired it, Schubert’s massive Octet in F major, the composer’s largest-scale chamber work. Long a fixture of the Ensemble’s repertoire, we are in quite different territory than the rest of the program from the onset. It may be an optimistic piece, but the scope is immense. Schubert begins the piece with a dramatic flourish, an announcement of confidence and a hint of the grand design. The reading here was lived-in and familial, filled with warmth and energy. Small ensemble, big sound.The vivace movement soared along in ecstatic call-and-response. The final movement placed an emphatic exclamation point on the evening’s proceedings.

Peter Lefevre is a contributing writer for Arts & Culture at Voice of OC. He may be reached at palefevre@gmail.com.