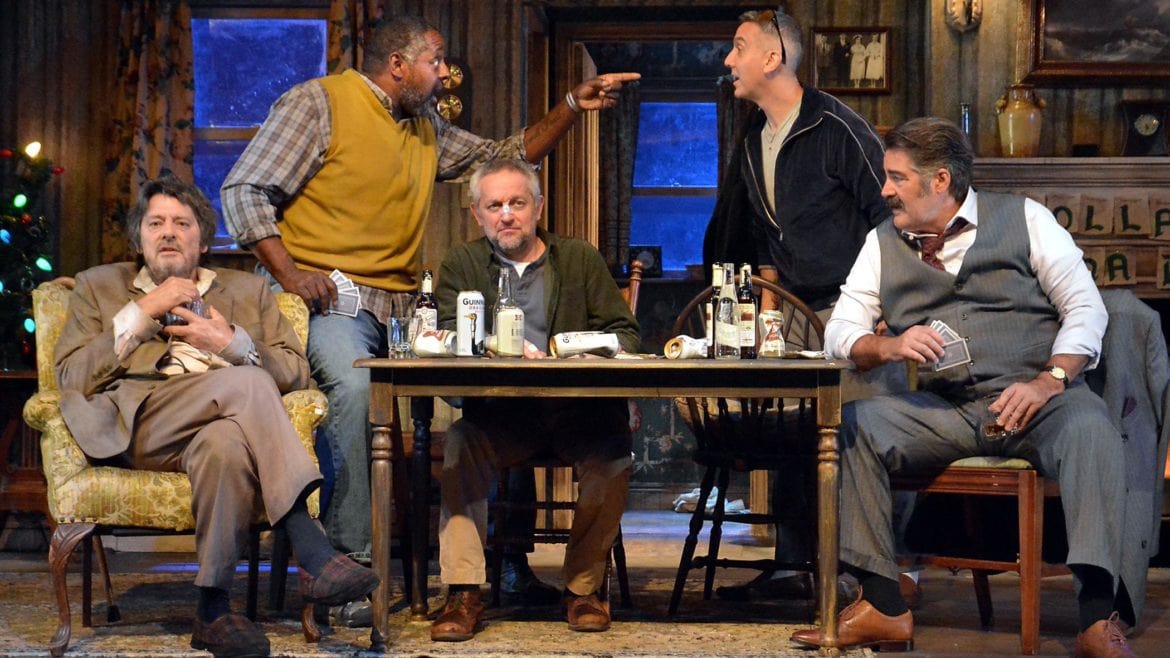 Christmas stories come in all shapes and sizes, and Conor McPherson’s “The Seafarer” just may be one of the most unlikely of all. But by the time you’ve watched it, you just might have that same heady feeling, the sense of eternal forces whose infinite powers evoke awe, as with any great work of fiction, whether during the winter holidays or not.

The power of the 2006 play, at Laguna Playhouse through early November, creeps up on us gradually and takes us by surprise. That’s because the picture McPherson paints of everyday life in his native Dublin hints at nothing extraordinary, let alone the supernatural.

It’s two days before Christmas, and we’re in the home of Richard Harkin (John Vickery) in the coastal suburb of Baldoyle just north of Dublin.

Richard has recently lost his sight, so brother James (JD Cullum), known to one and all as “Sharky,” has moved in to act as his caregiver.

The lengthy opening scene establishes the back-story of the Harkins and their myopic drinking buddy Ivan (Michael A. Shepperd), all middle-class guys passionate only about alcohol, food and card games.

Director Michael Matthews sets the tone by painting the brothers’ contrasting personalities: While Richard is generally in good humor, the wary Sharky is circumspect, trying to stay off booze through the holidays – a goal thwarted by the appearance of Richard’s garrulous buddy Nicky (John Colella) and his pal, Mr. Lockhart (Stephen Caffrey).

Nothing, at first, appears unusual as the five men interact. If anything, much of the first act is so uneventful as to lull us into complacency.

That changes when Sharky and Lockhart are left alone: The at-first cryptic Lockhart insists that on Christmas Eve 25 years ago, he and Sharky shared a jail cell in the town of Bridewell. When subtlety fails to jog Sharky’s memory, Lockhart asserts he secured freedom for Sharky, arrested for killing a vagrant, “because (Sharky) won a game of poker.” 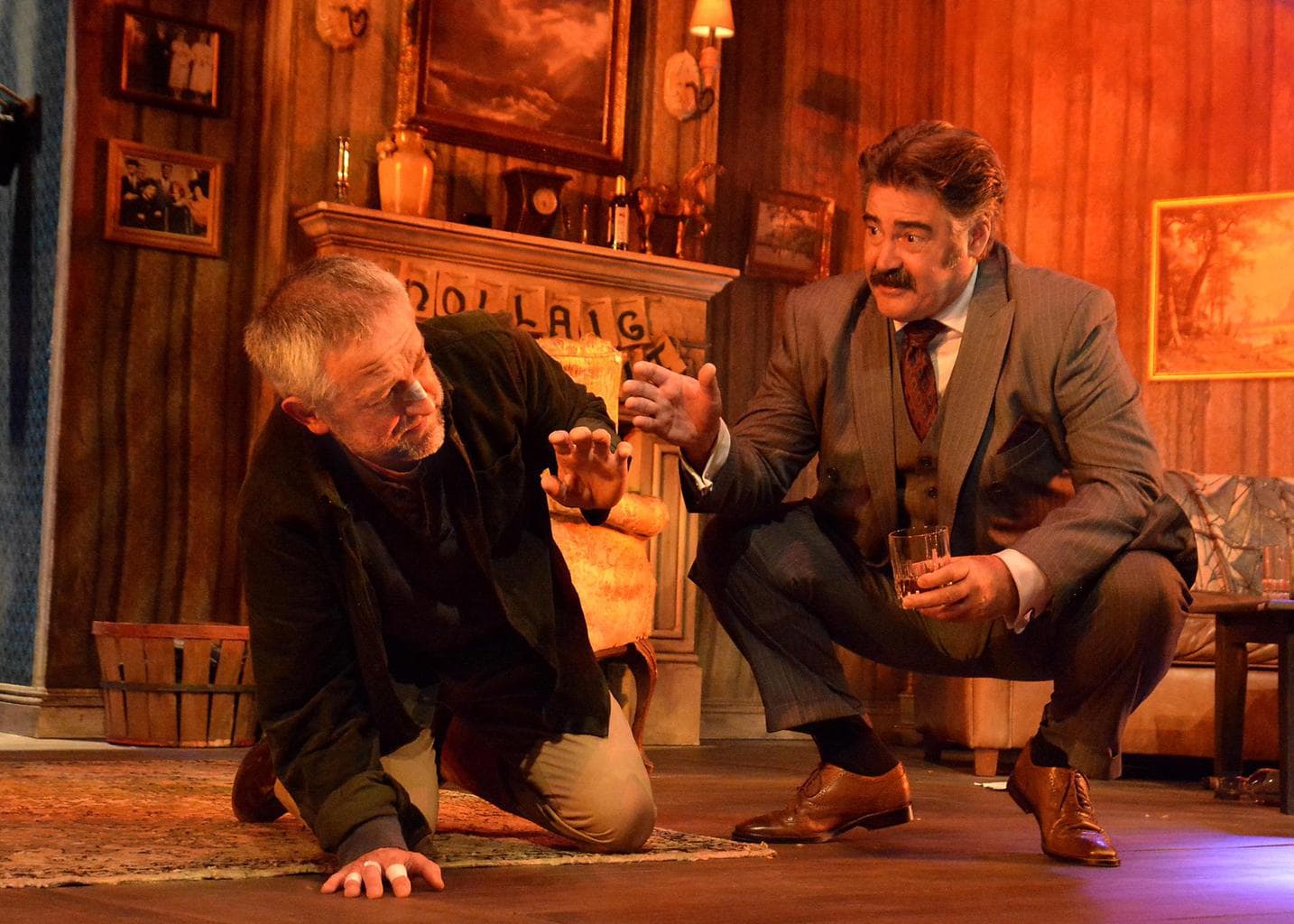 The crux of the 2006 play is a metaphysical showdown between Sharky (JD Cullum, left) and Mr. Lockhart (Stephen Caffrey), who’s ready to back up his claim of being Satan in human form by consigning Sharky’s soul to eternal damnation. (Photo courtesy of Ed Krieger)

The crux of “The Seafarer” arrives late in the first act: Lockhart expects a rematch at the poker table, the stakes being Sharky’s soul. Only by winning at cards can he escape eternal damnation.

If the program’s comparisons to “A Christmas Carol” and “It’s a Wonderful Life” are a stretch, know that “The Seafarer” is cut from much the same cloth as McPherson’s award-winning 1997 tale “The Weir” (produced at SCR in 2011).

Where that play is more flavorful in terms of Irish lore, “The Seafarer” sets the more prosaic aspects of everyday life into the context of something more monumental: How the sum total of a person’s earthly existence leads to an afterlife either peaceful and idyllic (heaven) or to the sleepless, icy-cold state of “perpetual agony” akin to being buried alive (hell).

At best tenuous is the play’s connection to the tenth-century Anglo-Saxon poem of the same name. The earlier work, known to most via Ezra Pound’s 1911 adaptation, conveys a solitary man surveying a life of hardship and desolation devoid of solace.

Propelling “The Seafarer” is McPherson’s mastery of language, delivering dialogue alternately mundane and riotous. The story’s metaphysical facets aren’t overplayed, with only three parties aware of the ostensibly innocuous poker game’s implications and its incredibly high stakes – Sharky, Lockhart, and us.

Cullum’s Sharky is neither moody nor even particularly rattled by events. Cullum projects grim silence and self-containment, offset only by a brief late-play explosion directed at Richard and Nicky.

Some of the most colorful dialogue goes to the sociable Richard. Vickery expertly exploits this, cannily stealing scene after scene while deftly skirting commonly seen stereotypes of blindness. 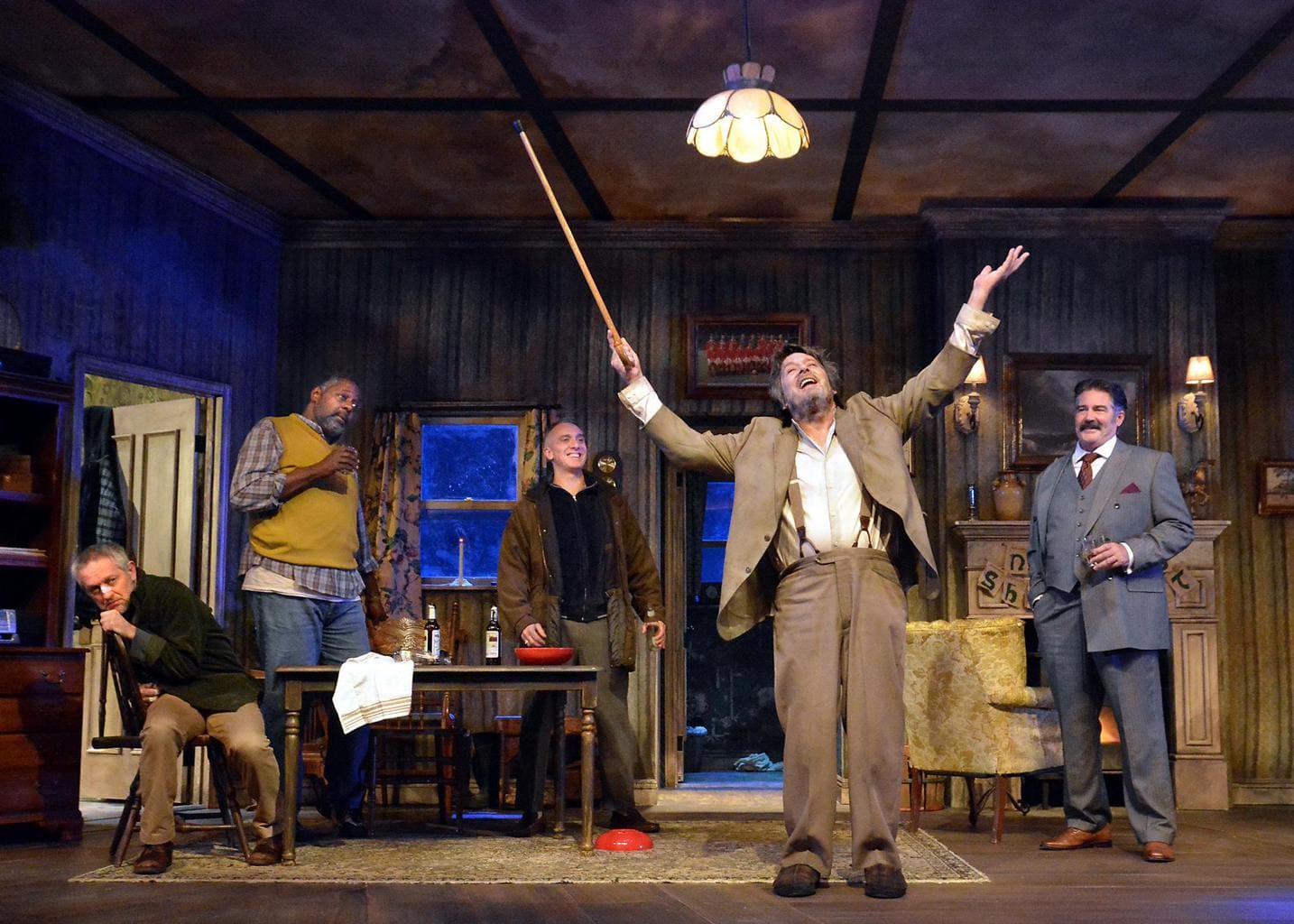 Caffrey’s polished, well-dressed Lockhart is at first unremarkable, but a second-act outburst reveals this Satan’s scathing contempt for humanity, Christ and God – something red-faced and other-worldly masquerading as a person. McPherson ingeniously shows that while occupying human form, Lockhart is devoid of any supernatural powers, forced to play by our rules.

Shepperd’s Ivan and Colella’s Nicky are hail fellows well met, comically oblivious to the spiritual turmoil Lockhart has ignited within Sharky. The cast’s Irish brogues are particularly pungent thanks to their solid performances and the work of Tuffet Schmelzle as dialect coach.

The production’s strikingly Gaelic visuals are bolted in place by Stephen Gifford’s impressively detailed scenic design, right down to the handmade letters spelling out “Nollaig Shona Duit” (Irish for “Happy Christmas to you”) affixed to the fireplace mantel.

Alex Jaeger’s costumes, Tim Swiss’s lighting and Kate Wecker’s sound design bolster the look and feel of a tale that, like the satanic Lockhart, sneaks up on us, takes us by surprise, and promises to take dominion over the soul of someone so remarkably unremarkable as to make him readily relatable to just about anyone who beholds Laguna’s show.

Eric Marchese is a contributing writer for Arts & Culture at Voice of OC. He can be reached at emarchesewriter@gmail.com.