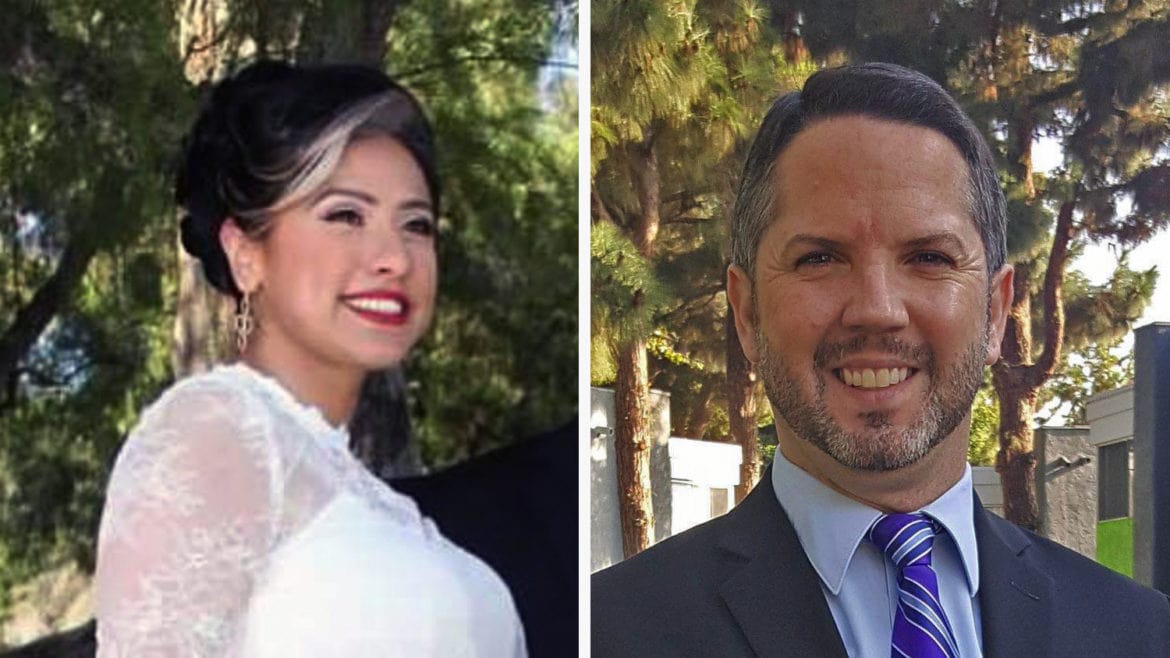 Griselda Govea (left) has publicly accused Santa Ana City Council candidate Phil Bacerra of physical abuse when they were in an on-and-off relationship.

Santa Ana City Council candidate Phil Bacerra is facing domestic violence allegations from a former girlfriend, and the Democratic Party of Orange County, which endorsed Baccera, has hired an attorney to investigate the allegations. Bacerra denies committing any physical abuse.

Griselda Govea, who had an on-and-off relationship with Bacerra from January 2007 until 2012, publicly accused Bacerra of emotional and physical abuse in an Oct. 3 Facebook post.

Her post, which was shared at least 125 times, said Bacerra spat in her face and threw her against walls. She also told the OC Weekly and Voice of OC that Bacerra kicked dirt into her face after attending a USC football game.

“Phil threw me up against the walls of his apartment slamming me on the ground,” Govea wrote in her Facebook post. “When I tried to escape his violent tirade and ran toward the door he ripped my clothes off me.

“While my experiences with Phil have been largely been kept secret I feel now compelled to speak on this topic since he has decided that he should be a public servant.”

“You want real change? Be accountable with your vote. Phil Bacerra has no problem with abusing power and women,” she added. “Prevent another abuser from getting his hands on our city.”

In response, Bacerra denied he ever was violent towards Govea or any other women.

“While our relationship was unhealthy, I was never physically abusive. I have never in my life laid my hand on a woman in violence,” Bacerra said in a Facebook post the day after Govea went public. “The accusations that have been made about me and my conduct are totally and completely FALSE.”

“I absolutely deny any of my ex girlfriend’s claims that I laid a hand on her, spat on her, or any other claims of physical abuse that she has made, or that is going to come up between now and Election Day,” he later added in a statement to Voice of OC.

Orange County Democratic Party officials hired an attorney from San Diego County to investigate the allegations and issue a report to the party, according to Florice Hoffman, the party’s treasurer and a member of its executive board. The party’s central committee will then decide at its Oct. 22 meeting whether to revoke its endorsement of Bacerra.

Voice of OC asked both Bacerra and Govea for written records, such as emails and text messages, that they believe support their statements.

In their public posts, both had said they have emails – and in Govea’s case, text messages as well – that show whether the abuse happened.

Govea wrote in her Facebook post about the alleged violence, “Caring neighbors and friends, who heard the abuse or witnessed me in a disheveled state, regularly checked up on me concerned, as they were, with my welfare. I have emails and texts from these witnesses. You need not take my word alone concerning these matters.”

Asked for copies of these emails and texts, Govea provided 44 screenshots of emails between herself and Bacerra, two of which each include a sentence referencing alleged violence by Bacerra. Both were written by Govea to Bacerra in 2010.

“You not only insulted Me, lied to Me, laid your hands on Me, but you also spat on Me,” Govea wrote in a Nov. 9, 2010 email to Bacerra. Among other ways he “crossed the line,” she wrote, Bacerra called her “fucken retarded.”

Bacerra replied to the email: “As [I] have the million times before, [I] am sorry for behavior that [I] exhibited that was not very becoming of a gentleman. If only You would ever portray an adult and accept my apology.”

He added: “Any relationship takes two to work. You seem to think otherwise. Don’t cry too loud when other boys become disinterested in Your limited efforts.”

In an interview, Bacerra said his reply to Govea was not an admission of guilt.

Bacerra said his email exchanges with Govea during their relationship were “mentally and emotionally exhausting,” adding: “I’m sure there are many sensational claims that she made during our relationship, and I did not respond to every single one. But my lack of response was never an admission of guilt, just more of a sign of fatigue.”

“It was obviously a short response, because I did not want to have another lengthy email exchange with her, and have yet another argument with her.”

Regarding documents backing up his statement, Bacerra said in his Facebook post that he was willing to share emails in person that show Govea’s claims aren’t true.

“Sharing these emails is the best way to demonstrate that our past relationship has been completely mischaracterized and that the claims are simply not true,” Bacerra wrote.

Voice of OC asked Bacerra for those emails, and sat down with him to review them.

Bacerra did not show any emails regarding the physical abuse claims, and declined to provide copies of the emails he had printed out. Several of the emails showed a fraught relationship between the two, including Govea discussing how they had insulted and screamed at each other.

Asked if he has emails showing the abuse claims aren’t true, as he suggested in his Facebook statement, Bacerra said: “I offered to share the emails that I have in order to provide context that the relationship was not a physically abusive relationship, but it was an unhealthy relationship where harsh things were said by both of us.”

Voice of OC asked Govea if there are witnesses to physical abuse, or people she told about the abuse at the time, whom the news agency could reach out to.

Govea said, “No, not to the physical abuse,” but that there were “neighbors that heard the commotions upstairs in his apartment.”

One of those neighbors, Joevany Lopez, said in a phone interview that he lived next to the apartment that was directly below Bacerra’s. Lopez, who was a friend of Govea’s, said he didn’t see physical abuse, but did hear loud arguments between Bacerra and Govea late at night, and that Bacerra would come home late at night “drunk” and “belligerent.”

Bacerra would also get into “shoving matches” with a man, Raj, who lived directly below Baccera, said Lopez.

Bacerra, in the interview, denied he ever had a physical confrontation with Raj, and denied that he would come home drunk and belligerent.

“Raj and I never had physical contact,” Bacerra said, later adding: “I absolutely deny the claims of drunkenness, belligerent-ness, and any sort of physical altercations with my neighbors.”

“I suspect [Lopez] is grinding an axe against me because I was opposed to Prop 8, and [he] and his girlfriend at the time were supportive of Prop 8. [Lopez] then contacted the manager of our apartment complex to report that I put a sign on our balcony,” Bacerra said, referring to the 2008 California ballot measure that banned same-sex marriage.

Lopez said that’s false, that he “never knew [Phil] posted signs” about Prop 8, and that Lopez didn’t even move in to that apartment until November 2009, a year after Prop 8 was on the ballot.

“Wow, he was really reaching on that one,” Lopez said of the Prop 8 claim. “That’s a great come-back story, and a great exit to maybe taking responsibility on Phil’s part.”

As for Bacerra and Raj, he added: “Oh yeah, there was shoving matches that were broken up…the shouting matches did escalate to pushing and shoving. That did happen multiple times.”

After Lopez said he didn’t move into the apartment until a year after Prop 8, Bacerra said it’s possible he was confusing Lopez with another neighbor.

“I do not remember the exact dates of Joevany [Lopez]’s residency in his apartment on Broadway. It is possible that I am confusing him with another neighbor in that apartment,” Bacerra said in a statement.

The Orange County Young Democrats, which had endorsed Bacerra, announced Oct. 4 it was withdrawing its endorsement.

“In light of recent revelations, the Orange County Young Democrats Executive Board has voted to revoke our endorsement of Phil Bacerra for Santa Ana City Council, Ward 4,” the group wrote in a Facebook post.

Democratic Party officials were told in mid-August that Govea was alleging abuse by Bacerra, and the party paused their endorsement decision for a week to give her a chance to come forward, said Hoffman and other people close to the party.

At the time, “we didn’t know if the allegations were just verbal abuse when they were together…It was unclear what kind of allegations they were,” Hoffman said.

During the week the endorsement decision was paused – Aug. 20 to 27 – a friend of Govea’s who was in touch with the party about the claims said Govea had “decided not to go forward” with her allegations, Hoffman said.

“We take these allegations seriously, and we’re doing the best we can in the short timeframe that the allegations became public,” Hoffman said.

In the meantime, Bacerra is keeping his OC Democratic Party endorsement. On Wednesday, the party sent a mass email linking to an official voter guide that endorses Bacerra.

In an interview, Govea said the reason she didn’t move forward in late August was because she didn’t want to add additional stress as she deals with a serious, ongoing health condition: pulmonary arterial hypertension, high blood pressure in the lungs that can cause heart failure.

“I still didn’t know what was going on with my health” at the time, Govea said.

“I said I wasn’t ready to put my life out there, and I needed to take care of my health,” she added.

As for suggestions her allegations were initially limited to verbal abuse, and that physical abuse claims were added later, Govea said: “That’s straight out a lie.”

Govea said she was talking about physical abuse “all along.”

Bacerra is running for the Ward 4 City Council seat, and his only opponent in the Nov. 6 race is Roman Reyna, a former councilman. Both are Democrats.

Govea denied any suggestions she may have worked with Reyna or his supporters, such as Councilman Vicente Sarmiento, Councilman Jose Solorio, or Planning Commissioner Eric Alderete.

“I don’t even know them,” Govea said in a phone interview Friday. “I have nothing to do with those characters.”

Over the weekend, a website and Facebook ads emerged, funded by the election campaigns of Reyna and Sarmiento, criticizing Bacerra and featuring three edited videos of Govea describing abuse by him. The videos end with text saying “Santa Ana Deserves Better Than Phil Bacerra,” and a paid promotion of one of the videos was displayed between 5,000 and 10,000 times to people on Facebook, according to the social network.

In the Friday interview, Govea said she has nothing to gain from coming forward with her allegations.

“I want the voters to know and hold their vote accountable for who they’re putting in office,” Govea said.