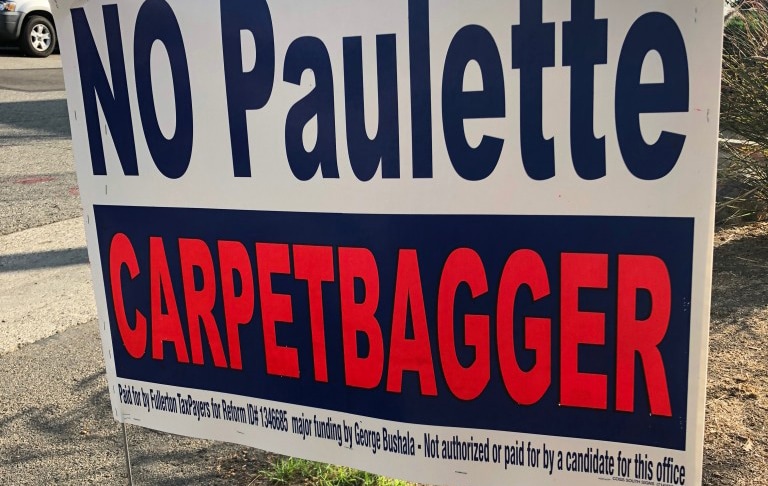 Courtesy of Friends for Fullerton's Future

The opposition signs that local blogs and watchdogs of stealing.

City blog Friends for Fullerton’s Future posted two videos of Chaffee allegedly stealing the signs — the first video posted Oct. 5 and the second video posted Oct. 8. Chaffee is married to Mayor Doug Chaffee and she has been routinely called a “carpetbagger” in local blogs for moving from their home in north Fullerton to the southeast, in order to run in District 5 and serve on the five-member council. District 2, where she moved from, isn’t up for election until 2020.

Fullerton Taxpayers for Reform, a local political action committee, purchased the signs Paulette Chaffee is accused of stealing. The signs say, “No Paulette” and under that “Carpetbagger.” The signs, which list the committee, state no City Council candidate authorized or paid for the signs.

“I’m 100 percent —  there’s no doubt in my mind that she stole the sign from the front of my office and stole the sign on the bridge,” Bushala said. “I bought 200 signs — 180 are missing — if she returns the signs, I will not file charges against her. Because I will file charges of theft and trespassing (if she doesn’t return the signs).”

Paulette Chafee did not respond to a voicemail or text message seeking comment, but criminal defense attorney Stephan DeSales reached out to Voice of OC on her behalf.

“We’re not going to make any comments on it until we find out what’s going on,” DeSales replied to questions about whether it was Paulette Chaffee in the videos stealing signs.

“Right now it’s been turned over to the DA’s office,” DeSales said.

In an undated statement from Paulette Chaffee’s campaign suspending her City Council effort, she acknowledges she moved to run for the district.

“Once I made my decision to run for City Council in District 5, I purchased a home in the District, which I am pleased to call my full-time residence,” Paulette Chaffee’s statement reads. “I’ve been terribly discouraged to find that my candidacy has generated so much animosity, negativity, and corrosive discourse in our community … With the latest round of accusations, the negative discourse in this campaign has simply gone too far.”

Sharon Kennedy, publisher of the community newspaper Fullerton Observer, broke the news Oct. 8 that Paulette Chaffee was suspending her campaign. Kennedy told Voice of OC the candidate’s campaign planned to respond to allegations of carpetbagging raised in the newspaper’s opinion section last month, but after the local blogs posted the videos and accused Paulette Chaffee of taking the signs, her campaign manager sent the campaign suspension statement to the Fullerton Observer instead.

Her husband, Mayor Doug Chaffee, is still registered in District 2.

Although Paulette Chaffee suspended the City Council campaign, her name will still be on November’s ballot for Fullerton voters. It’s unclear what she will do if she wins the election for the southeast District 5 seat.

“These signs are being stolen. We have it on good authority that the culprit is none other than your wife, Paulette Marshall Chaffee,” Bushala’s wrote Doug Chaffee.

Bushala also sent a letter to DA Tony Rackauckas Oct. 9, alleging Paulette Chaffee stole a carpetbagger sign Oct. 2 at one of his properties near downtown Fullerton. He also accused her of stealing a sign from the Union Pacific railroad bridge over Harbor Boulevard Oct. 3. Bushala provided the DA two Youtube links to security camera footage which show a woman stealing signs and putting them in the trunk of a car.

The Oct. 2 video shows a white jeep stopping in front of a building at night and a woman removing the sign, while the Oct. 3 video shows a silver Lexus stopping behind some businesses and a woman walking to the bridge to remove the sign. It appears to be the same woman in both videos.

“I purchased 200 signs and put 180 signs up and all of a sudden 180 signs from a three-day period were completely missing from the neighborhood,” Bushala told Voice of OC. “Basically all my signs disappeared completely and I thought, ‘Oh my God. Somebody’s’ stealing all my signs!’”

Bushala also said he recognized one of the cars.

“We saw this vehicle pop up (on security camera footage) and I know it’s her white Jeep Cherokee,” Bushala said.

The Fullerton Police Department issued a news release Oct. 10 when it said the department forwarded the case to the Orange County District Attorney.

“The individual who reported the crimes has also alleged that the potential suspect may have ties to Fullerton political contests and as such, the Fullerton Police Department has referred this case to the Orange County District Attorney’s Office for follow up and further investigation to avoid any potential conflicts of interest,” the news release reads.

The DA received the case and it is under review, according to an Oct. 12 email from spokeswoman Rebecca  Fakhartousi.