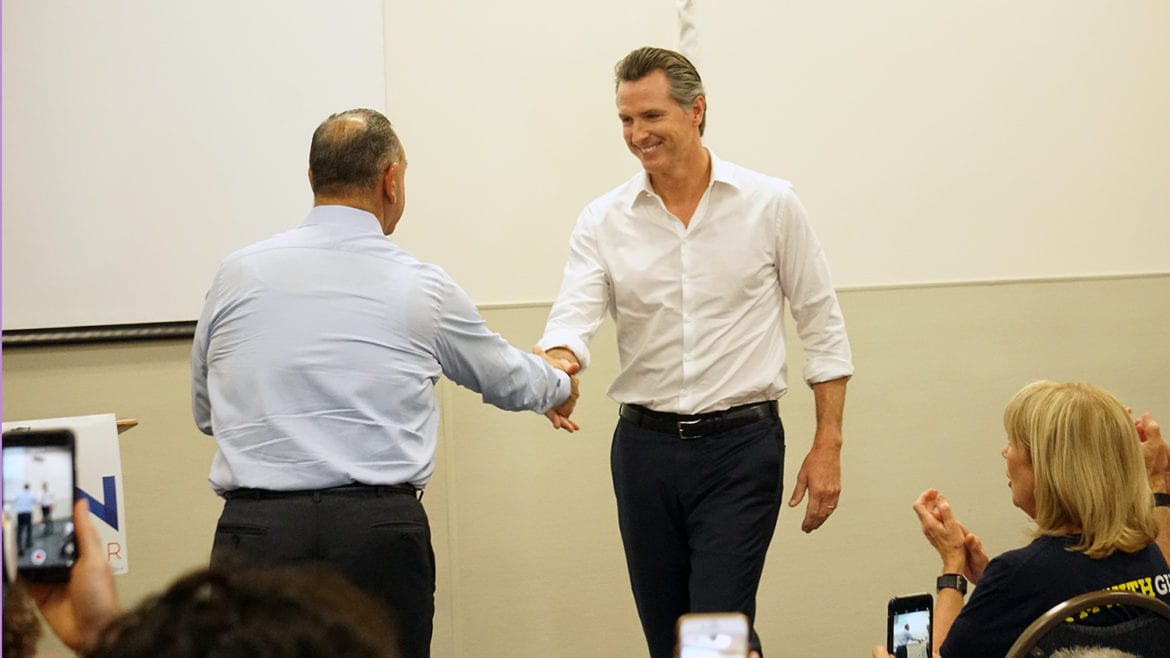 California Lieutenant Governor Gavin Newsom and Los Angeles Mayor Eric Garcetti stopped in Orange County Saturday as part of their own campaigns and to stump for Democratic Congressional hopefuls, in a last-minute push by Democrats to energize voters ahead of the Nov. 6 election.

Newsom, who is running for Governor against Republican businessman John Cox, appeared at the United Food and Commercial Workers Union Hall 324 in Buena Park Saturday afternoon to speak to more than 200 volunteers from Democratic groups across Southern California.

Newsom called California’s economic growth “the most extraordinary success story of the United States” but highlighted income inequality as the greatest problem facing the state.

“Despite all that, you know what lies underneath – we’re not just the richest state but the poorest state,” said Newsom. “And this fundamentally is the issue that attaches each and every one of us to this larger cause. Because you recognize as Democrats that there’s no leak on your side of our boat – we rise and fall together.”

“We have a unique opportunity…not just to send a message to Trump, but about Trumpism,” said Newsom. 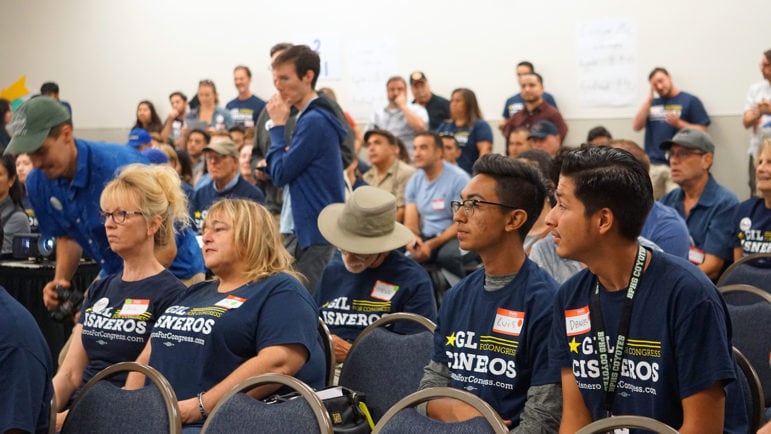 Democrats are trying to flip at least 23 Republican-held districts that voted for Hillary Clinton in 2016, which would give them a majority in the 435-member House of Representatives. Seven of those seats are in California, and four in Orange County.

Midterm elections are typically seen as a referendum on the party of the president, and Democrats are hoping dissatisfaction with Trump will turn out Democrats in force.

Races in three OC districts – the 39th, 45th and 48th Congressional districts — are considered toss-ups by the Cook Political Report, while the 49th district is rated as “Lean Democratic.”

A number of high-profile Democrats have come to Orange County to campaign in those four districts, including former President Barack Obama, former Vice President Joe Biden. On Friday, Vermont Senator and former presidential hopeful Bernie Sanders (I-Vt.) stumped in Oceanside for Democrat Mike Levin, who is running for the 49th Congressional district that includes the southern tip of Orange County.

Earlier in the day Saturday, Los Angeles Mayor Eric Garcetti spoke to the same volunteers as Newsom before they set out for an afternoon of canvassing the district.

“Those Republicans who are in power in Washington, D.C. are literally defining their success by what they can take from us as Americans.” Garcetti told volunteers. “Take away our environmental protections, our immigrant protections, take away our body’s protections. Take away our healthcare.” 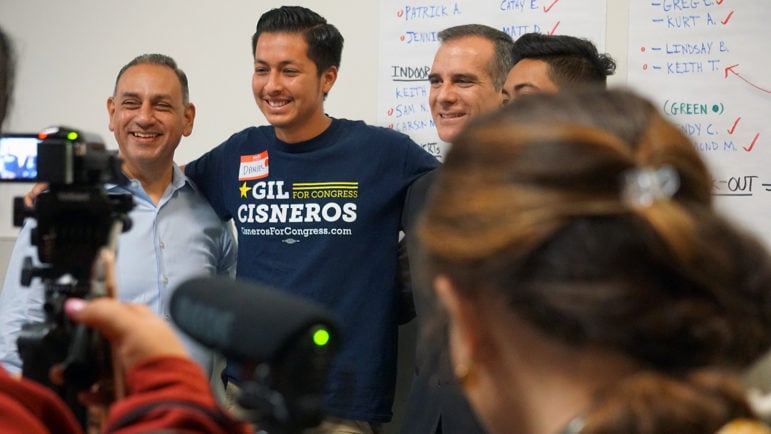 Democrat Congressional Candidate Gil Cisneros, left, poses for a photo with a volunteer and Los Angeles Mayor Eric Garcetti, on the right.

Garcetti, who has said he is exploring a presidential bid, traveled to Orange County in a bus funded by the Democratic Midterm Victory Fund with about 20 volunteers who made calls to voters while on the road. After Cisneros, he visited the campaigns of Democrats Harley Rouda in the 48th district; Katie Porter in the 45th district, Levin in the 49th District and Katie Hill in the 25th district.

Asked whether he is running for president, Garcetti said “not yet.”

“There’s no president on the ballot but there is a Congress that enables him,” said Garcetti to reporters after his remarks.

Newsom visited Orange County in September to campaign for Porter, Rouda and Levin. He’ll return to Orange County next week for another series of voter events.

Cisneros’ campaign manager Nic Jordan said over the last month, the campaign has consistently attracted more than 200 volunteers each Saturday to get out the vote.

The district is the most diverse of the contested congressional districts in California, with nearly two-thirds of the population, and half of all registered voters, identifying as Asian or Latino.

With party registration in the district almost evenly split between Republicans and Democrats, getting voters to turn out will be key.

“This is a working-class area, if you pull a profile of what the state looks like, it’s exactly this area,” Montez said.