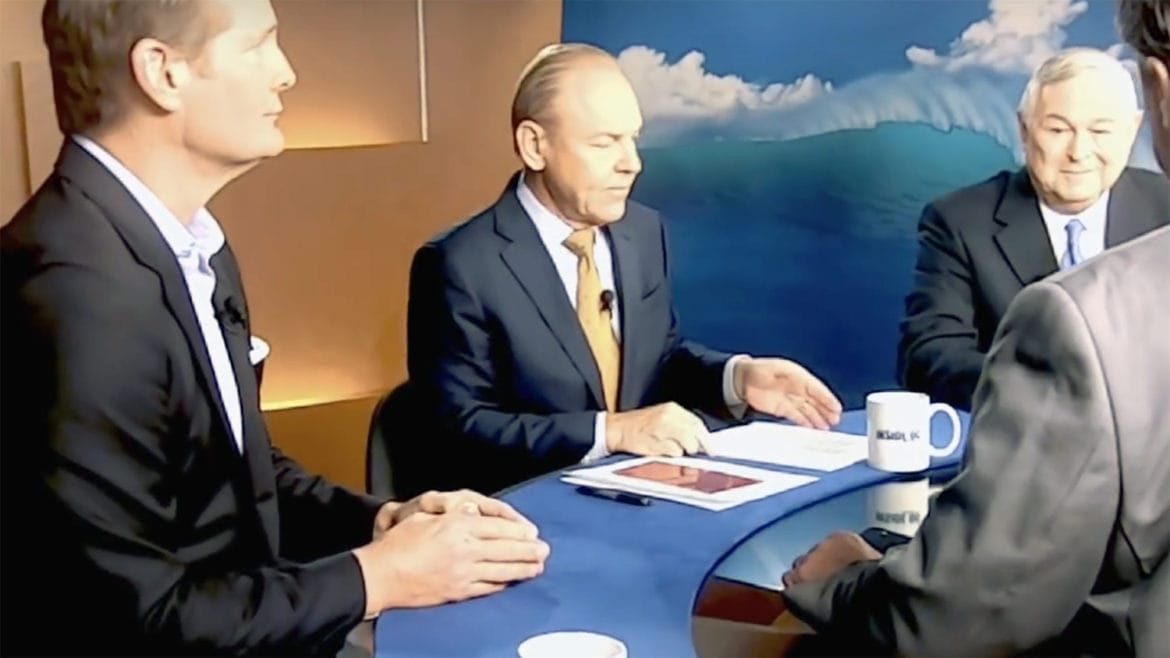 Screengrab of video provided by Inside OC

Rep. Dana Rohrabacher (R-Costa Mesa) and Democratic candidate Harley Rouda argued over notes before their first debate Monday, with Rouda threatening to walk away from the debate during a verbal fight between the two camps.

“Yeah, this is unfair. So you got him (Rohrabacher) with all of his notes and preparation,” Rouda said Monday on the set of Inside OC with Rick Reiff.

The exchange was caught on hot mics and rolling cameras.

“There’s no notes. In fact, we’re going to take a photo of the notes because you’re a member of congress and you shouldn’t need notes.” said Rouda campaign spokesman Jack D’Annibale, before using his phone camera to take a picture of Rohrabacher’s notes.

“Dana is smiling the whole time, even when Jack says, ‘I’m going to take a picture of your notes,’ Dana spread them out so he can,” Neugebauer said in a Wednesday phone interview.

“I think they were just unprepared and tense. I think they had not prepared their own candidate. I sense that part of this was Jack (D’Annibale) and their campaign manager doing a dance for their boss — because they didn’t tell their boss beforehand (about the format and notes).”

D’Annibale, in a Wednesday email, wrote:

“The rules of Monday’s joint appearance were clear: participants were not allowed to bring notes. The differences between these two candidates were also quite clear. Harley had an authentic vision for protecting Medicare and Social Security.”

“None of that is true or frankly important. What is true and important is Rohrabacher got beat Monday morning AND he had a cheat sheet. This also underscores why Dana won’t do town halls … he has no record to run on. And needs to be told by his handlers how to talk to folks in Orange County,” D’Annibale wrote.

Neugebauer said Harley and his staff were aggressive toward Reiff.

“Harley started being aggressive,” Neugebauer said Wednesday. “Really trying to bully a veteran journalist, which in my experience never works.”

Neugebauer approached the desk where Rouda, Reiff and Rohrabcaher were sitting before the debate during Monday’s note fight.

“Don’t touch me!” D’Annibale told Neugebauer after he approached the desk.

“He said specifically no notes,” D’Annibale said, while pointing a finger at Reiff.

“I don’t recall any question about notes,” Reiff replied.

Rouda asked Rohrabacher if he needed the notes.

“I have a really broad track record,” Rohrabacher replied.

Rohrabacher countered, “Do we really need notes for 30 years worth of contributions? Yes you do.”

“I have 30 years of contributions, I don’t have notes,” Rouda replied.

“That’s funny, I never thought you were in public service,” Rohrabacher said.

Reiff broke up the argument between the two and said:

“I’ve never told a guest they can’t bring notes if they want to have notes on this set, Harley … and I don’t recall that discussion. … That wasn’t one of the ground rules that were laid out.”

Rouda then threatened to walk off.

“We’re going to have to reschedule … because I’m not going to sit here and have a question asked of me,” Rouda began to say until Reiff cut him off and said “Then I’ll have a show with Dana and we can talk about the fact that you walked off because Dana brought notes … come on, I mean, really?”

“And you think it’s okay for him (Rohrabacher) to have notes? So you can ask me a question and I’m going to answer without question, while he flips through his papers and figures out what he’s going to answer and how he answers it and you consider that fair journalism?” Rouda asked.

Rouda did bring up the note dispute during the debate, alleging Rohrabacher “broke the rules” by bringing notes.

“Let’s go everybody,” Reiff concluded, before starting the taped debate that’s slated to air at 5 p.m. Sunday on PBS and KDOC.