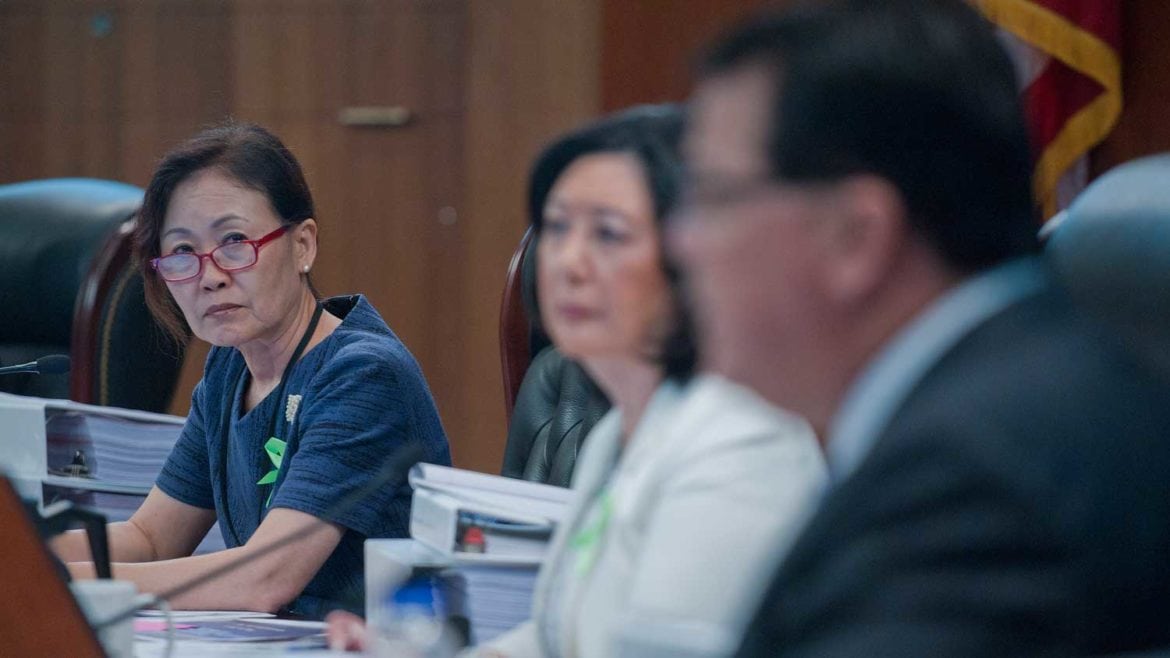 Jeff Antenore for Voice of OC

From left: Orange County supervisors Michelle Steel, Lisa Bartlett and Shawn Nelson during a discussion of the county's ICE contract at a May 2017 meeting.

Orange County supervisors, at the request of District Attorney Tony Rackauckas, gave their first approval Tuesday for an ordinance requiring drug and alcohol programs to register with the county, a move officials noted is unnecessary because state law already requires it.

Drug rehabilitation programs operating in residential homes are controversial in many areas of the county, with residents urging officials to take action.

While the registration effort could apply countywide, it was limited only to rehab programs that exist in unincorporated areas, outside cities, which are home to just 4 percent of OC residents and host a small portion of the total rehab homes in the county.

California law requires every county to create and maintain registries of all drug and alcohol abuse programs within the county – something Orange County and other counties have not done.

“We’re not even doing what the [state] law requires us to do, which is register all these [programs],” said Supervisor Shawn Nelson, who has endorsed Rackauckas’ opponent, Supervisor Todd Spitzer, in the Nov. 6 election.

Nelson added: “All of this stuff [in the proposed ordinance] is already required – and has been, except for” a proposed section requiring disclosure of who owns rehab homes and related businesses.

Rackauckas pushed back, saying he hadn’t known the registry was already required.

“I didn’t see that this was something that could have…already been done…and should have already been done, and that the [county] Health Care Agency should already have this registry. And as a matter of fact, they don’t, [and] the other counties don’t,” Rackauckas said.

“Our belief was that to move forward, that this…was a good step,” he added. “We’re trying to do something to get control of this problem.”

The first approval of the ordinance was authorized by supervisors Andrew Do, Lisa Bartlett, and Michelle Steel, with Nelson and Spitzer abstaining.

The clash came amid growing attention on rehab homes, including certain operators engaging in fraud, taking advantage of people with addictions, and causing problems for neighbors with seeming impunity.

Hundreds of drug and alcohol rehab homes in Orange County are unlicensed, and many have engaged in fraudulent over-billing of insurance companies and affected nearby residents, officials say. Many of the most problematic rehab homes, officials say, are in the coastal cities of Costa Mesa, Huntington Beach, and Newport Beach.

Since 2005, state law has required each of the 58 counties to create and maintain registries of drug and alcohol abuse programs across their whole county, and every such program must register with their county if they have a list.

But no county in California actually maintains a registry, according to OC officials.

The county measure put forward by Rackauckas and approved by supervisors requires registration only for rehab facilities that are outside of cities – also known as unincorporated areas – are home to about 4 percent of the county’s more than 3 million residents.

The number of facilities covered by the ordinance probably “will be small,” said Richard Sanchez, the head of the county’s Health Care Agency, which will be in charge of the registry.

In a news release after the vote, Rackauckas said the move was part of his efforts with others “to solve abuse of addicts by bad actors in the treatment industry.”

Supervisor Michelle Steel, who has endorsed Rackauckas in his re-election, distributed a county news release commending Rackauckas and saying the ordinance “will require alcohol, narcotic, and drug abuse programs to register each year.” The release did not disclose that the ordinance does not apply to rehab homes operating in cities.

Under the existing state law, the county is required to have its registry apply to all rehab facilities across the county, including those in the 34 cities within Orange County. But OC doesn’t do that, and Rackauckas’ measure does not apply to rehab centers in cities, which are home to 96 percent of county residents.

“Talk about a hoax close to an election,” said Spitzer, pointing to the timing of when Rackauckas was bringing it up. Under questioning from Spitzer, Sanchez, the health agency director, said the first meeting the DA’s office had with him about the proposal was on Oct. 1.

“I mean, the Health Care Agency didn’t even know about it – the…department head, until Oct. 1 – his first meeting,” Spitzer said.

“This [rehab home] problem’s been going on for decades,” he added. “This [ordinance] only applies to the unincorporated [areas]…It doesn’t do anything.”

“This [rehab home issue] has been developing rather quickly. And…the reason to develop quickly is because of the proliferation of these sober living homes…They’re growing faster than we can get control of ‘em if we just do case-by-case criminal investigations. So we need to have something greater than that.”

The county’s lead lawyer told the supervisors what they were doing is legal because they’re implementing state law.

“I would take the position, if the ordinance was challenged, that what the board is doing today is exercising a power granted to it by the state, not going above and beyond or outside [of it],” said County Counsel Leon Page.

“What we’re doing here is not illegal. That’s the bottom line,” said Do, the supervisors’ chairman.

Rackauckas’ measure, which comes back to supervisors for a second and final approval in the next few weeks, does expand the bare minimum of state law, by requiring rehab facility owners to disclose their ownership interests in other businesses.

Nelson said that expansion on state law could have been accomplished with a narrowly-tailored ordinance requiring the ownership disclosure.

“We don’t put forward ordinances that restate the existing state law,” Nelson said. “All this does is restate the entirety of the state law, except for the fact that it adds the [ownership disclosure] provision you brought up.”